Home News Festival News from All Over

Festival News from All Over
By Ralph Lucas – Publisher

(May 26, 2021 – Toronto, ON) As we move toward the midpoint of the year, and as the hopes for a loosening of COVID-19 restrictions increase, festival news has ramped up and it was time again to take a look at what’s happening where with film festivals in Canada and elsewhere.

We need to apologize to Tom McSorley, Executive Director of the Canadian Film Institute and the The European Union Short Film Festival (EUSFF) because we almost missed their update. This festival was always a popular, free event packing the Arts Court Theatre in downtown Ottawa, but when the event moved online last year, organizers were thrilled with its breakaway success. Instead of strictly local audiences, the EUSFF now reaches viewers from across the country. Online EUSFF 2021 starts tomorrow May 27 and runs until the 29th. This year’s collection of 21 outstanding films come from 21 European Union Member States and are packed into three thematic programs: Home, Transformation, and Discovery. EUSFF is a collaboration between the Canadian Film Institute, the embassies of the EU Member States, and the European Union National Institutes for Culture. There is more information online.

Staying in the nation’s capital, The Ottawa International Animation Festival is still a few months away, but there’s an important date in June for their Pitch This! project, which is a highlight of The Animation Conference (TAC), the industry-focused forum that runs September 22 to October 3, 2021. During its 17 years as part of the OIAF, TAC has helped launch many projects and Pitch This! is an important career step for animators. Pitch This! 2021 (presented by Mercury Filmworks) is open to Canadian projects only, spanning all demographics from preschool to adult series. Inclusive projects and underrepresented creators are strongly encouraged to apply, in particular women, BIPOC, and 2SLGBTQIA+ members of the animation community. Proposals should include: project format and target demographic; a project synopsis, including logline and character descriptions; at least one episode synopsis; and the bios of key creators. Concept art is recommended but not required. There is more information online. 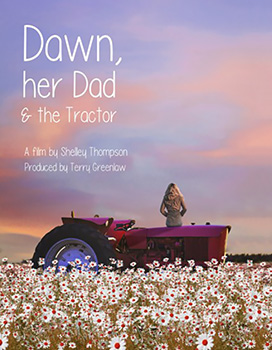 Canadian director Shelley Thompson’s debut feature film Dawn, Her Dad & the Tractor will make its world premiere at the Inside Out Film Festival in Toronto. Shot in Nova Scotia in the summer of 2020, Dawn, Her Dad & the Tractor was one of twelve projects invited to the NY Writers Lab (supported  by Meryl Streep/Nicole Kidman) and one of ten international scripts invited to Cannes for the Breaking Through The Lens initiative in 2019. Award-winning performer, veteran of The Trailer Park Boys, and champion of LGBTQ issues, Shelley Thompson trained at the UK’s Royal Academy of Dramatic Art, the Canadian Film Centre (2015), and was one of the eight Women In the Director’s Chair (WIDC 2016/17) where she was also recipient of the Feature Film Award for her screenplay for Dawn, Her Dad & the Tractor. Thompson’s short films have played festivals around the world. The Inside Out Film Festival starts tomorrow May 27 and runs until June 6, 2021. Click here for a link to the The Inside Out Film Festival and other film festivals running in May and June.

A little west of Toronto lies the city of Oakville, home to the Oakville Film Festival and 2021 is their biggest festival to date with 100 films on the 7 day schedule including 18 feature films and documentaries (9 are Canadian). There are 81 short films, the majority of them Canadian but also shorts from Turkey, USA, India, Germany, UK, France, Iran, Mexico, Finland, China, Brazil, Italy, Turkey, the Phillipines and others. The 2021 festival launches on Wednesday June 23 with a program of shorts and then the 86-minute Canadian feature Marlene directed by Wendy Hill-Tout. Inspired by the true story of Marlene Truscott, a housewife who fought to exonerate her husband from a crime he didn’t commit, Marlene became involved in the fight for justice at a young age, when Steven was arrested at 14 and sentenced to hang. When he was released from prison ten years later, she fell in love with him. Marlene’s story is a story of hiding, living under an assumed name and protecting her children. He was free, but now she was in prison. Through it all Marlene was determined that Steven would get justice, that they would find light in the darkness, a darkness that buried the truth. Surrounded by boxes of files Marlene found a world of lies, cover-ups, and secrets. It’s a story about an extraordinary woman, written and directed by women and costarring Kristin Booth in the title role. The Oakville Film Festival is streaming its schedule of thrillers, sci fi, supernatural, comedy, romance, and world class documentaries and there is more information about ticketing and passes online. Find a link to the Oakville Film Festival here.

Quick notes: The 2021 Festival de Cannes runs July 6 to 17, the 46th annual Toronto International Film Festival is scheduled to run September 9 to 18, 2021 and the 2022 Sundance Film will take place in-person and online January 20-30.

Submit your festival information to news@northernstars.ca