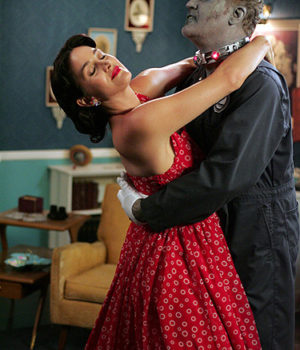 Fido – A Review
By Wyndham Wise

In Hollywood, they are called high-concept movies. Movies that can be pitched in a single sentence or less with an obvious hook aimed squarely at multiplex audiences. Ivan Reitman’ Twins is the perfect example of the type: “Danny DeVito and Arnold Schwarzenegger as twin brothers separated at birth.”

It’s perhaps a sign of maturity in the Canadian film industry that we are now making high-concept movies in addition to the usual diet of art-house fodder. Éric Canuel’s Bon Cop, Bad Cop was just such a film: “A bilingual buddy-cop movie.” Following in that film`s very successful footsteps we now have Andrew Currie`s Fido: “A domestic zombie comedy set in the 1950s.”

After a rocky start, it would seem like Telefilm Canada’s push to back Canadian films that the public actually wants to see is finally paying off. Although the recent snub of Bon Cop, Bad Cop at both the Genies and Le Prix Jutra, where it collectively won a total of two awards, demonstrates that industry insiders still have a preference for the smaller, personal films that the Canadian movie-going public would rather give a pass.

Fido is an $11-million piece of eye-candy from British Columbia featuring a first-class cast and some very fine art direction. In a nifty black-and-white set-up piece that opens the film, we learn that “space particles” descended to earth, re-animating the dead and leading to the zombie wars. Just in the nick of time, a scientist invents a device similar to a dog collar, which once placed on the zombies, makes them quiet and harmless. This leads to the growth of a worldwide corporation, named ZomCon, whose sole purpose is to control the growing zombie population and eliminate them when necessary.

Little Timmy (K’Sun Ray) is a well-behaved shy boy who is dissed by local bullies and lives in a small town right out of Blue Velvet. His mother (Carrie-Anne Moss) buys a zombie (Billy Connolly) to keep him company and serve as the household pet-come-servant. After initial hesitation, Timmy warms to his new friend, whom he names Fido, but things go horribly wrong when Fido’s collar goes on the fritz. Through a series of complications, this eventually leads to a localized outbreak of rampaging zombies.

Fido is a hybrid, part zombie horror film, part social satire, and a rather odd remake of Lassie Come Home. Its strengths are its overall look, a throw back to the striking Technicolor films of the 1950s; its design, with beautiful restored cars from the period; and the warmth that Moss brings to her role of a lonely housewife who finds herself attracted to Fido when her uptight husband (Dylan Baker) ignores her. And there is Tim Blake Nelson (from O Brother, Where Art Thou?) who brings enthusiasm to his role as the neighbourhood pervert whose sexy zombie provides more than just domestic service. As Fido, the great Scottish comedian Billy Connolly is almost lost in his makeup, and goes through the film speechless, but he does manage to express a great deal of humanity with his eyes.

Yet this genial comedy has too much on its mind to be either effective as a horror film or a biting satire. The script is the main culprit, and nothing really develops beyond a few unpleasant jolts or mild chuckles. Fido is an ambitious second film from the British-born Vancouver-based director Andrew Currie (his first film was 2002’s Mile Zero) that is pleasant to look at, mildly entertaining but, unfortunately, fails to bring its subject to life.

Wyndham Wise is the former publisher and editor-in-chief of Take One: Film in Canada. He was a contributing editor at Northernstars.ca