(February 3, 2021 – Toronto, ON) There are a number of film festivals, all with interesting news, so instead of running a bunch of short items we’ve decided to group them together in this single column.

First up, because this stuff happens this week, the National Film Board (NFB) has six films in the Victoria Film Festival, including 3 award-winning documentaries and three shorts. Feature docs include The Forbidden Rule by Afghan-Canadian director and Oscar-nominated producer Ariel Nasr; Stateless from Haitian-Canadian director Michèle Stephenson and Wintopia, which is very special because it’s from Montreal filmmaker Mira Burt-Wintonick and it’s a portrait of her late father, the renowned documentarian Peter Wintonick.

The 3 NFB shorts fall with the festival’s Animate Me program and include the BC premiere of Altötting by German animation filmmaker Andreas Hykade; The Great Malaise by Quebec animator and illustrator Catherine Lepage and, I, Barnabé, which is also a BC premiere and is from by Montreal-based but Capilano College grad Jean-François Lévesque.

The Victoria Film begins this Friday, February 5 and runs until the 14th with screenings online and available across British Columbia. They can be streamed at any time over the 10-day festival. You can find more information on the VFF website.

Staying with British Columbia and the NFB, look for Vancouver-based Jennifer Abbott’s The Magnitude Of All Things (an NFB co-production) which will be available for streaming to residents of British Columbia as part of the Powell River Film Festival as well as from the World Community Film Festival in Courtney. Both festivals run from February 5 to 16. 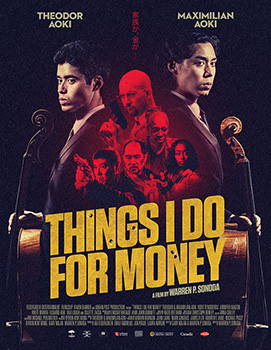 The smallish (compared to Toronto) city of Oakville, Ontario has its own festival, the Oakville Festivals of Film & Art. Because of the COVID pandemic, they’ve had to rethink what they’re doing and part of that is by offering films outside a traditional festival schedule. Luckily the 3 films they have on offer for their Winter Screening Series will be available across Canada. The films (all Canadian or Canadian co-pros) and their screening dates are Things I do for Money from director Warren Sonoda, who will also be taking part in an online Q&A. It screens tomorrow, Thursday February 4 at 7:30 pm.

Viggo Mortenson stars in and directs Falling, which will screen Thursday February 25 at 7:30 pm, and on Thursday April 22 at 7:30 pm, in honour of Earth Day 2021, there will be a screening of Clark Johnson’s most recent film Percy, starring Christopher Walken as a Canadian farmer who takes on a giant corporation after their GMOs interfere with his crops. Johnson is confirmed for a Q&A but others will be added as the late April date approaches. By clicking on the titles you’ll be able to watch trailers for these films and learn more about their casts and crews.

Looking forward, organizers have decided to expand the usual 3-day festival into a full week that will include both virtual and live screenings and events.  The 8th annual Oakville Film Festival will run from June 23 to 29. There’s more information online.

Finally, after the COVID pandemic caused the cancellation of last year’s International Film Festival of Ottawa (IFFO), it will return this March as an online festival with some of the best films from the festival circuit. These are the first programming announcements for 2021 and include three highly anticipated feature films that were originally slated to be part of the 2020 festival. They are, It Must Be Heaven, A State of Madness, and Andrey Tarkovsky: A Cinema Prayer.

“We are thrilled to be able to welcome back three films we selected for IFFO 2020 to the 2021 edition. These are three of my personal favourites and I’m excited that we are still able to give them their online Canadian premieres at our Festival,” said Tom McSorley, CFI Executive Director and IFFO Director of Programming.

It Must Be Heaven, by Palestinian director Elia Suleiman, is an internationally co-produced dark comedy film that garnered the FIPRESCI Prize for Best Film In Competition and a Jury Special Mention at the 2019 Cannes Film Festival. The film explores nationalism, normality, and identity through Suleiman’s trademark critical gaze, following the character he plays as he searches for somewhere to call home. With a screen presence that has been compared to Buster Keaton and a tendency to embellish small details that brings his style ever closer to the surreal, Elia Suleiman reveals the experience of a perpetual outsider in this highly acclaimed piece of work.

The stylish and evocative film A State of Madness is set in the Dominican Republic during the dictatorship of Leonidas Trujillo and was selected as the Dominican entry for the Best International Feature Film at the 93rd Academy Awards. Its director, Leticia Tonos, was awarded the Medal of Cinematographic Merit the same year the film was released, and was also the first woman to earn this distinction. A fascinating portrait of a particular era in the Dominican Republic’s history, this quietly intense drama is all about power: those who have it, those who don’t, and those caught in between.

Andrey Tarkovsky: A Cinema Prayer is a look into the famed director’s life and the masterpieces of cinema he brought into the world. This documentary allows the director to tell the story himself as he shares memories, art, inspirations, and even some contemplation on the meaning of human existence, made up of his works, rare contemporary photos and videos, and sections shot in the places where Tarkovsky lived and made his movies. About the film and his father, director Andrey A. Tarkovskiy says, “Would it be possible, more than thirty years after his death, to hear again the voice of the director as he talks about his life, his profession, his vocation? These were the goals that I set myself in the making of the film.”

The IFFO will take place March 11 to 21 in a completely online format. More programming announcements will roll out over the course of the month with passes going on sale February 23, 2021. There is more information online.