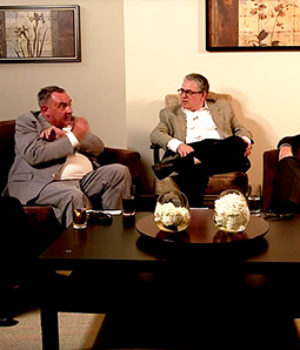 (September 11, 2015 – Toronto, ON) Using a series of interviews and roundtable discussions, the 2015 Toronto Eco Film Financing Conference and TV Show will explore the state of film finance and the related creative financiers, vehicles and the complex strategies that are supporting today’s film industry. The ECO conferences started when French Production companies Paramax Films and Monde Ouest created The Eco Series in 2012 and have gathered to each year since at Cannes and the Toronto International Film Festival (TIFF). The conferences are broadcasted on Bloomberg TV and BFM Business. The 2015 Edition takes place September 16th at “King’s Penthouse” located next to the TIFF Bell Lightbox and will be broadcasted live on Eyedo TV. Viewers will be able to ask questions live on the Internet to the speakers.

This year`s edition will be moderated by International Entertainment Lawyer Corky Kessler from DL&E who regularly speaks on the business and legal aspects of feature film development and tax incentives in connection with the entertainment industry. He has developed, packaged and executive produced feature films, theatre projects and television projects, including “The Sum of Us,” starring Russell Crowe, which won the Australian Academy Award for Best Film and most currently “Certifiably Jonathan” starring Jonathan Winters, Robin Williams, Howie Mandel, Rob Reiner, Jim Carrey, Sara Silverman, and others.

He is currently working with Rudy Langlais on the Miles Davis Movie based on the book “Miles & Me’ and the Bob Marley Film and a remake of the film Captain Blood. He has been a featured speaker during Sundance Film Festival, Cannes Film Festival, Toronto Film Festival and the American Film Market.

Following are the details of the Round Table Program:

Corky Kessler will make a special conference about art of pitching. Tori Avey and James Pasternak will be joining Corky to evaluate and comment on actual pitches.

International Co-Productions and other non-recoup able financing are essential to reduce the risk profile of a film investment. Films have to be created in a way that international co-productions can be applied efficiently. Discussions about constantly changing the landscape. INVITED SPEAKERS: , Michael Pellegrino – Daisy Hamilton— Tri Coast , anc Doris Long — John Marshall Law School.

Welcome to the world of fantasy at Cape Town Film Studios (CTFS), a four-year-old, R380m ($35m) state-of-the art complex that is part of South Africa’s own version of Hollywood as the country becomes a destination of choice for many of the world’s top filmmakers.
INVITED SPEAKERS: Pascal Schmitz, Mayenzeke Baza, Head of Acquisitions and EP at AAA Entertainment, Isaac Mogajane, Producer at Diprente

How to get money and the difficulty to get money for financing a movie. The Jump Start Act of 2012 helps and other advise from the panel experts. INVITED SPEAKERS: Daisy Hamilton – Tri Coast, Vivian Van Dijk – EYES IN Magazine, Mike Pellegrino—–Relentless Entertainment.

Click here and remember to bookmark this site to watch the livestream of the 2015 TorontoECO Conference.