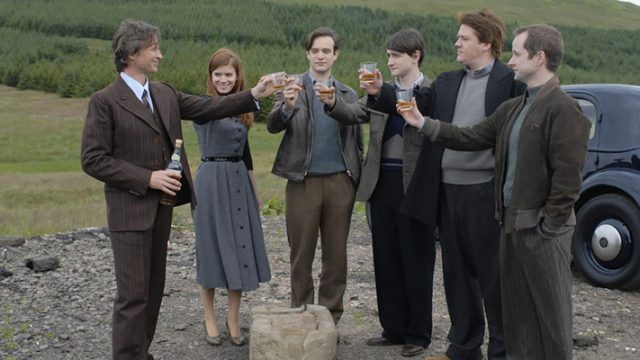 If you’re not familiar with the story, Stone of Destiny is set in Scotland in 1950, but the story of The Stone itself begins long before that. Better known as The Stone of Scone (pronounced skoon), it is believed to have first been used in the 9th century when the Scottish monarchy took their place on it during their coronation ceremony. But in 1296, Edward I, known as “Longshanks,” took the stone to Westminster Abbey to show the power England held over the Scots. It was incorporated into the throne used to coronate British royality and was last used by Queen Elizabeth II in 1953. Some seven centuries after The Stone was taken from Scotland, Ian Hamilton, a young political activist from Glasgow, persuades three friends to help him liberate The Stone. They break into Westminster Abbey in the heart of London in the early hours of Christmas morning and remove a powerful symbol of Scotland’s nationhood. 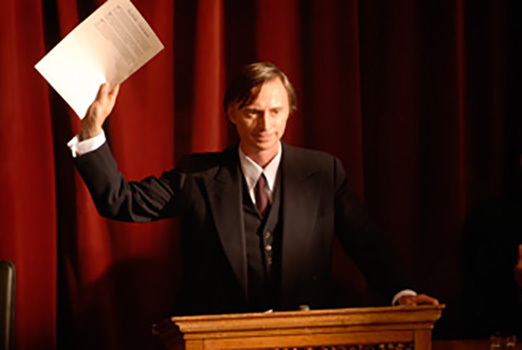 The movie itself is a classic “caper film.” At another time the perfect cast would have been Alec Guinness, Peter Sellers and all the rest from the 1955 movie The Ladykillers. Working from his own script Charles Martin Smith has made a delightfully light comedy with some high drama moments that shows success can be had despite all the odds, all the mistakes, all the bad luck that can stand in the way. The characters are fresh and easy to watch as they bumble along on a hair-brained prank any serious revolutionary would have walked away from. Of particular note are the veteran actor Robert Carlyle who plays an understated but important role in the movie – his real life character played an important role in the rebirth of Scottish nationalism – and Kate Mara whose natural beauty shines in this film. A beauty that is matched by the strength of her character who pushes her male cohorts onto success when they are ready to give up. 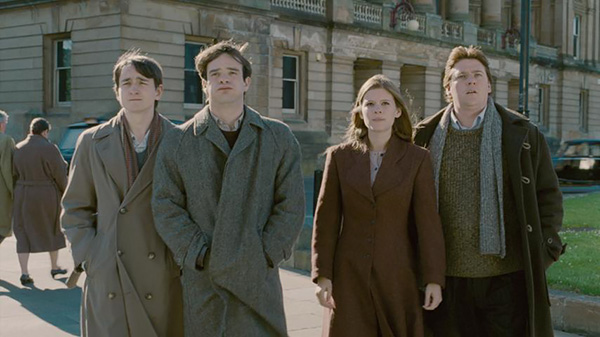 Stone of Destiny, filmed in Scotland and England, also captures the era with precision. It helps when some of the locations haven’t changed much in the past few hundred years, but it is the way Smith has drawn the rebellious teenagers that is most important. They rely on each other. There are no guns, no violent explosions, no deep plots of mayhem and destruction. They are on a noble quest on behalf of their “nation” and also of their generation. 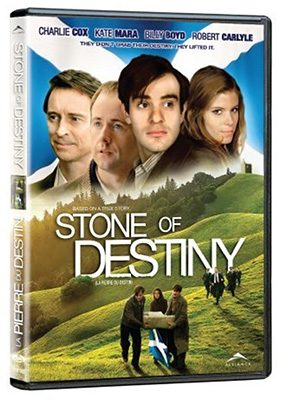 The best DVDs have lots of extra tracks and the Stone of Destiny DVD contains two important features. Important for film buffs, historians, and aspiring filmmakers. The first is the documentary Taking and Making Stone of Destiny. Using old newsreel footage intercut with scenes from the movie along with outtakes, behind-the-scenes shots and interview footage, the true story of the plot unfolds, as we see the amount of work that went into making the movie. We get to meet the cast, and the director, and the real life Ian Hamilton, who hatched the plot and is played in the film by Charlie Cox.

The second feature is a version of the movie itself but with a slightly muted soundtrack that allows Charles Martin Smith to tell the story of the film. If you’ve ever wondered how films get made this is a fascinating insight. From the opening scenes where we learn from the director that the original plan was for something very different that was actually shot and edited and ultimately discarded for the version that was finally released. We also learn that the scenes shot inside Westminster Abby were in fact shot in the that location and elsewhere.

The story itself is well worth seeing if you missed the theatrical release, but when you add in the bonus tracks, the Stone of Destiny DVD is worth the price of admission.

Also see: The cast and crew of The Stone of Destiny.

The Magic of Scarborough