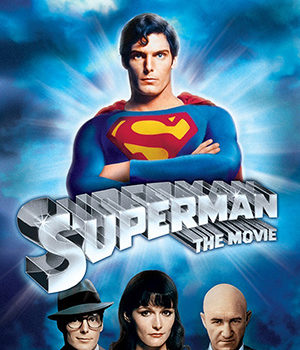 There is a considerable Canadian connection to Superman. It begins with his creation by comic book artist Joe Shuster who was born in Toronto, Ontario on July 10, 1914.One of Joe Shuster’s cousins was the comedian Frank Shuster. Shuster and American writer Jerry Siegel’s creation appeared in Action Comics #1 in June of 1938.

Glenn Ford is pictured below as Johnathan Kent or “Pa” Kent as he was usually referred to, the earthly father to Clark Kent, the boy from another world who would grow up to be Superman in the 1978 film that starred the late Christopher Reeve as the man of steel.

In the series of four movies starring Christopher Reeve, the adult Clark Kent fell for co-worker Lois Lane, played by Margot Kidder. Canadian actors appearing in the 2013 Warner Bros. movie, Man of Steel, include Julian Richings, Tahmoh Penikett, David Paetkau, Ian Tracey and Mike Dopud. In addition to many US locations, parts of the movie were shot in Vancouver, Nanaimo and Uclelet, British Columbia.