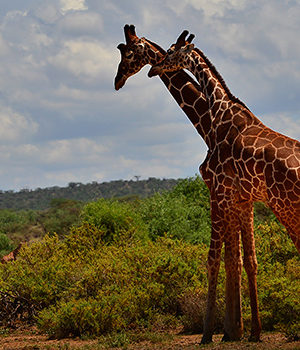 (October 27, 2015 – Toronto, ON) – Nomad Films has announced the world broadcast premiere of its new documentary, Giraffes: The Forgotten Giants, co-written and directed by award winning Mark Johnston (To Bee or Not to Bee; The Climb; The Al Qaeda Code and Empire of the Word).

Everyone on the planet knows what a giraffe is. “G” is for Giraffe in the alphabet and “Sophie” the Giraffe teething toys can be found in the hands of practically every newborn baby. But, most people don’t know much about giraffes, or that these iconic creatures of wild Africa, with their long necks, cinnamon spotted coats, flirty lashes and loping gait are disappearing at an alarming rate. Two hundred years ago there were a million giraffes, in 2000 there were 140,000 roaming Africa’s plains and forests. Now, fifteen years later, their numbers have plummeted to less than 80,000.

And, yet there has been a bewildering lack of awareness and recognition of the threat to the survival of these gentle giants, especially compared to the other large mammals of Africa. Giraffes: The Forgotten Giants delves into the reasons behind this “silent extinction” and introduces us to the scientists, and biologists who are making remarkable headway gathering new information in labs, universities and in the field, that may stave off their impending demise.

Until the ground breaking work carried out by University of Waterloo’s Dr. Anne Innis Dagg, nothing was known about giraffes. After earning her Master’s Degree at the University of Toronto, she went alone to Africa in 1956–57 to study the behavior of giraffes in the wild – a study which was the first of its kind for any animal in Africa. Her 1976 book, The Giraffe: its Biology, Behavior and Ecology.’ is the bible in the field.

“Anne is the Jane Goodall of giraffe research” said Anne’s friend, co-worker and contemporary, John Doherty who is the Coordinator of the Reticulated Giraffe Project in Samburu, Africa where much of Giraffes: The Forgotten Giants was filmed this past spring.

Doherty, along with other scientists, including wildlife biologist Dr. Zoe Muller, is carrying out ground breaking studies in the areas of infrasound (low frequency sound humans can’t hear), and biometrics, using the most current research and state of the art technology. Because they have very little experience of the technical work of recording this low frequency soundscape in the field, Forgotten Giants’ sound recordist Jason Milligan spent months putting together the necessary equipment to do the delicate recording featured in the film. At Samburu, they made recordings that may prove giraffes use infrasound to communicate. It is potentially a world first that could give a voice to these seemingly silent creatures. 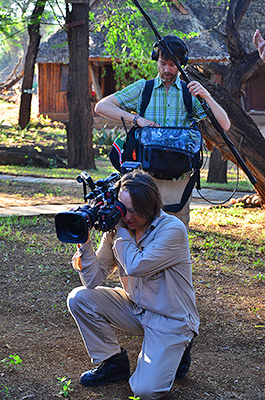 Also using cutting edge FLIR THERMAL CAMERA TECHNOLOGY, Doherty and Muller are able to observe giraffes at night, in a natural, relaxed manner, without scaring them away. Giraffes are shy, skittish creatures, and DOP Russell Gienapp built platforms on Toyota Land Cruisers, filming behind blinds built by locals in the style of a Samburu home, to keep them from running away from his cameras.

Giraffes: The Forgotten Giants also introduces us to a number of individual giraffes – both in the wild in Africa and in captivity in Canada.

We learn from Dr. Zoe Muller that giraffes who were previously thought to be bad mothers, in fact have a very strong social bond with their young. They not only take care of their own infants, but also those of other mothers – displaying babysitting behaviors, shared nursing, grieving, and dedicated guarding of their young at night.

Jason Pootoolal, a young zookeeper at African Lion Safari in Hamilton, Ontario introduces us to the first giraffe born by artificial insemination. He and his team are developing assisted reproductive techniques for a highly endangered subspecies of giraffe. Their research has garnered them the award for Outstanding Achievement from the Canadian Association of Zoos and Aquariums and holds great promise towards bolstering the giraffe population.

At African Lion Safari, the crew were able to film with no problem, since the giraffes are used to interacting with Jason and his team, especially during their regular ultrasounds to monitor the pregnancies of the females they have artificially inseminated in their world leading program.
The more that is revealed about their biology and behaviors, the more we can do to help giraffes. We know they are killed for their meat, and are threatened by environment encroachment by the locals. We know they are at risk from the large predators they live amongst. But is there more to the story?

Right now, more than any time in their history, we need to listen to these seemingly silent giants. Through the work of the scientists in Giraffes: The Forgotten Giants, that might soon be possible

Mark Johnston: Director, Co-Writer, Executive Producer is the founder of Nomad Films, which develops and produces factual programming for film and television.
Giraffes: The Forgotten Giants was made in association with the Canadian Broadcasting Corporation with the participation of the Canadian Media Fund, Rogers Documentary Fund, Rogers Telefund and with the assistance of The Canadian Film or Video Production Tax Credit, The Ontario Film and Video Tax Credit and the cooperation of the Canadian Federation of Musicians.

The World Broadcast Premiere of Giraffes: The Forgotten Giants will be on CBC-TV’s The Nature of Things, Thursday, November 5, 2015 – 8 PM (8:30PM NT)