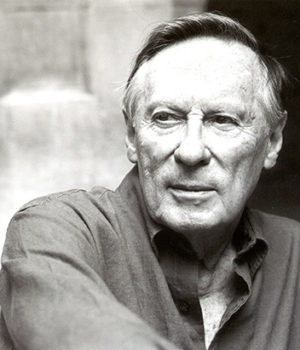 When David Gardner dropped by the office in early August 2004, I greeted him by saying, “There’s a familiar face.” He seemed genuinely pleased to be recognized. I felt honoured that in a still active and busy life he had a few minutes to sit and chat about his work in front of the cameras and on stage. It would be unfair to use the term “fixture” when describing his long and successful life as an actor because he was so much more than that. It is just that we all too often applaud longevity alone and forget the vast stretch of quality work that runs through those years.

Gardner had been performing, in one way or another, since his days at Lawrence Park Collegiate, where his interests included track and field and where he was the sports editor for the school magazine, a cheerleader and actor. He was just 18 years old when he made his professional debut on CBC Radio. A year later he won the Ontario Verse-Speaking Competition. The thought that there ever was such a competition indicates how very different a world we live in today.

From high school, Gardner entered the University of Toronto, which was a magnet for actors in those days, thanks to the Hart House Theatre, often considered the cradle of Canadian theatre. The Hart House Theatre started in 1919, and in the 1920s it was common to see stage and screen actors like Raymond Massey or David Manners on its stage. In the 1930s, a very young Lloyd Bochner appeared in The Snow Queen and Johnny Wayne and Frank Schuster were regulars in the annual follies. But starting in the 1940s, and particularly after the Second World War, theatre in Canada began to grow. Over the next 20 or 25 years the Hart House would be home to actors like William Hutt, Charmion King, Don Harron, Kate Reid, Donald Sutherland and Ted Follows. Later they would become film directors, but Norman Jewison and Arthur Hiller spent their earlier years at Hart House as well, as did producer Lorne Michaels. And so it was into this world that Gardner began to learn his craft. Under the direction of the legendary Robert Gill, he played Othello, Macbeth and Marc Anthony. He played Constantine opposite Kate Reid in the Chekhov play The Seagull. In 1949 he joined the Straw Hat Players, a company of students that toured the Muskoka area in the summer months and returned for three more seasons. It was now the early 1950s, and Gardner was well on his way along his chosen path.

Highlights of those early years include an appearance with the New Play Society in Spring Thaw playing Littlejohn opposite Giselle Mackenzie at Toronto’s Royal Alexandra Theatre; appearances at the Crest and Jupiter theatres in Toronto; playing with the Canadian Repertory Theatre in Ottawa and the Brae Manor Theatre in Quebec; and a year on the road with the Canadian Players touring across Canada and the United States. By then the Stratford Festival had started up and Gardner spent three years with the company, including productions launched in New York and at the Edinburgh Festival. In 1957 he was honoured with a Tyrone Guthrie Award, which allowed him to begin a theatre research tour taking him to 13 countries in Europe. At the end of that time, he decided to stay in London where he starred in the West End production of Marc Connelly’s Hunter’s Moon. He also worked in a number of television productions for BBC and ITV. He joined the Old Vic Company just in time to return to Canada as part of their 1958-59 tour of North America.

By then Gardner had been a working professional actor for almost a decade. It was time to give back to the life he loved so much. In 1960 he chaired the committee that founded the National Theatre School in Montreal. It was also in 1960 that he thought he would combine his television and stage experience by trying his hand at directing television drama for CBC. It seemed like a perfect combination, and Gardner would direct some 75 productions over the next nine years. To name just a few, he produced and directed Uncle Vanya, as well as the George Bernard Shaw play The Applecart. Taking a turn at series television, he directed episodes of Jake and the Kid and Quentin Durgins MP starring Gordon Pinsent. He also directed Timothy Findley’s The Paper People, for which he won the Wilderness Award for Directing.

All of this time in television didn’t mean that Gardner had turned his back on theatre. Just one example is his famous production of an Inuit version of Shakespeare’s King Lear, one of three plays he was involved in for the Canadian Players’ tour of North America from 1961 to 1963. But by 1969 his own tour of duty in television was coming to an end and he became Artistic Director of the Vancouver Playhouse, a position he held until 1971. He later served as the Theatre Officer of the Canada Council, where his influence led to one of the most important events in Canadian theatre history. He convened a conference titled The Delemma of Playwrighting in Canada. The timing was perfect. Following Expo ’67 there seemed to be a surge of interest in all things Canadian. It was in 1971, for example, that the government finally caught up with public and industry demand and the CRTC enacted legislation making it mandatory for radio stations to play 30% Canadian content. Although to this day the Stratford and Shaw festivals dominate central Canadian theatre, there is a thriving Canadian theatre scene from coast to coast thanks in no small way to decisions and actions coming out of Gardner’s Ottawa conference. For example he was instrumental in launching a new era of Alternate and Indigenous theatre, introducing and subsidizing 25 new Alternate Theatre companies across Canada.

Some men when they turn 50 buy red sportscars or have affairs or run off to Spain to write poetry. A few manage to do all three. As Gardner approached mid-life he returned to his first love, acting, and he went back to school. At the University of Toronto he obtained a Masters degree and then a Ph.D. in Canadian Theatre History. He would return to teach there a few years later. He has also lectured at York University and for 20 years gave an annual Acting for the Camera course at Toronto’s George Brown College. But it was acting that took more and more of his time. A quick check of his credits reveals a film and television career in front of the camera that didn’t start until Gardner was “pushing 50” as the expression goes. But once started, it has kept going with steady success right up until today.

By his own count he had acted in some 850 roles on stage, radio, film or television. But like simple longevity, it isn’t the quantity that matters, it’s the quality that is important. Gardner continued to work precisely because of the quality of performance he brought to each role. Just one example was his work in the series, Traders, where he played father to Sonja Smits and was given a Gemini Award for that work in 1997. He had previously been given a Genie for The Insurance Man from Ingersoll in 1976. And if it wasn’t television, or film, the stage continued to be a large part of his life. He appeared at The Neptune Theatre in Halifax, the Manitoba Theatre Centre in Winnipeg, Theatre Aquarius in Hamilton and, at home in Toronto, at the Tarragon, Canstage, Necessary Angel and Factory Theatre. And he continued to direct. When the Hart House Theatre kicked off its 2003-2004 season, its opening performance was Gardner’s production of As You Like It.

You might think that travel and rehearsals and performing didn’t leave much time for anything else, but then you probably didn’t know David Gardner. He wrote extensively about theatre in Canada for the Oxford Companion, the Canadian Encyclopedia, The Dictionary of Canadian Biography, Theatre Research in Canada as well as the online Literary Encyclopedia. He was a founding member of the Association for Canadian Theatre Research in 1976 and was awarded an Honorary Membership for his “distinguished service to theatre in Canada.” In 1999 he donated his 25-year Canadian Theatre History Collection to the Thomas Fisher Library at the University of Toronto. In 2004 he was given the Herbert Whittaker/Drama Bench Award for “Outstanding Contribution to Canadian Theatre”, as chosen by members of the Canadian Theatre Critics Association.

Dr. David Emmett Gardner was 91 when he died in Toronto following a long decline in his health, spending his last 8 years at an assisted-living facility.

This biography, originally published in 2004, was updated and is Copyright © 2021 by Ralph Lucas and may not be reproduced without prior written permission. For more information about copyright, click here.