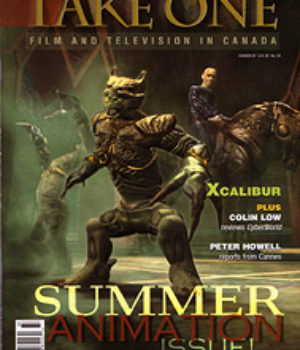 The movie opens on a suburban neighbourhood. It looks cold and vacant; pets are getting torn to pieces by a vicious wild animal. Brigitte and her older sister, Ginger, hate this place full of dead ends. To cope with it, the burgeoning hipsters stage and photograph gruesome suicide scenes for a school project that celebrates killing yourself as the ultimate “fuck off.”

Like Joan of Arc, Brigitte and Ginger are smart teenage girls who have somehow avoided the onset of menstruation. The autumn night that 16–year–old Ginger finally gets her period, she ends up doubly cursed by being attacked and mauled by a werewolf. Soon Ginger finds disturbingly coarse hairs sprouting on her body, has trouble stuffing her emerging tail into her underwear, and develops a sexual energy that gives every misogynist big man on campus a hard–on.

Meanwhile, slouchy, insecure Brigitte starts feeling complex emotions. Jealous, abandoned, worried about the only person in the world she cares about, she warns Ginger: “Something is wrong, like more than you being just female.” Pressured into becoming stronger and more 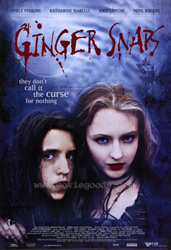 assured, Brigitte gets protective, then tries to save her sister from destroying herself without help from their ineffectual baby boomer parents.

A sophisticated attempt at grafting teen angst onto awerewolf tale, Ginger Snaps shows off plenty of mood, spirit and shrewd intelligence. Among other themes, the movie covers female puberty, male tyranny, sibling rivalry and lousy parenting. As confused, angry, self-destructive teens, Brigitte and Ginger (vividly incarnated by Emily Perkins and Katharine Isabelle), join a long line of fictional misfits extending back to Holden Caulfield and the protagonists of Rebel without a Cause.

The tightly bonded sisters suffer terminal alienation because they see things for what they are: the high school they attend is a “total hormonal toilet”; most of the adults around them are hypocrites and fools. Their own mother (Mimi Rogers in a startling performance) is a clueless flake who masks her irresponsibility behind parenting–for–dummies clichés, gleefully inflicting her well–meaning crap at the drop of a hat.

Informed by ageless archetypes, director John Fawcett’s and screenwriter Karen Walton’s take on youth revolt also reflects our current vantage point. In 1989’s Heathers, Christian Slater and Winona Ryder seemed cool and sexy as they murdered the soulless bitches who ruled over their hideously conformist high school. Times have changed. During an era of real–life teens who mow down classmates with assault rifles, violent revenge fantasies can seem more sinister than liberating.

Ginger Snaps offers bursts of graveyard humour and revenge–of–the–repressed thrills. Ginger herself enjoys a few moments of heightened sexual pleasure, and she enthusiastically mauls a couple of obnoxious idiots. In the end, however, the film’s treatment of rampaging hormones and unleashed bloodlust veers toward a bleak cautionary tale. Ginger endures so much pain, even Jeff Goldblum in David Cronenberg’s The Fly (an obvious influence) gets more kicks out of being a monster. The movie has a gravity that’s the polar opposite of similarly themed Carrie’s voluptuous lyricism.

Ginger Snaps does not push the tired diatribe that pop culture – Eminem, Buffy the Vampire Slayer, whatever – should be held responsible for weird and terrifying explosions of teen violence. However, the picture implies that fantasies of death and destruction sometimes lurch out of control. Brigitte discovers she has the moral fibre and detached cool to keep her violent ideas in the realm of fantasy. More narcissistic and emotional, Ginger ends up consumed by the horror she used to toy with in her school project.

In his handling of the story, Fawcett prefers suggestive sounds and images, not to mention clever sight gags, over an excess of noise and gross–out effects. (Val Lewton’s and Jacques Tourneur’s Cat People might be another inspiration.) As for Walton s script, it’s tight and convention busting for an era when horror is defined by self–referential slasher flicks like Scream. Rather than being chased by a wisecracking lunatic, the girl is the monster. And Walton’s dialogue deploys a stylized language: part contemporary teen talk, part secret code.

At the film’s heart lies Brigitte’s determination to transcend her ambivalent feelings about her sister and come to Ginger’s rescue. Like The Fly, Ginger Snaps hones in on the anguish of losing somebody you love to a monstrous transformation. As a genre picture, it tried but failed to draw major box office during its theatrical release. Maybe it has so much on its mind, it sometimes forgets to be suspenseful and scary enough to give good, basic horror thrills.

This review was originally published in Issue 33 (July 2001) of Take One magazine. Northernstars.ca acquired the archives of Take One in 2007.

Back to the Cast & Crew of Ginger Snaps.

Denis Villeneuve’s Maelström: Much Ado About A Fish

The Law of Enclosures

The Subversive Charm of Gary Burns