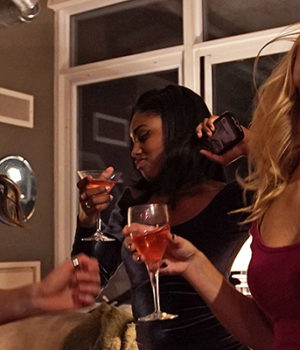 (February 17, 2016 – Toronto, ON) Binge drinking among young women has reached epidemic proportions. According to the U.S. Center for Disease Control and Prevention, alcohol is the leading cause of death for women age 18-24 in the Americas. It is involved in 9 out of 10 campus rapes. Nearly 14 million US women binge drink 3 times a month. Chances are you know a woman who is a binge drinker. Chances are you have taken her car keys away from her on more than one occasion. On Thursday, February 25th, CBC’s Firsthand will present an intimate, all-access journey into the lives of young women and binge drinking. Titled Girls’ Night Out, this made-for-television documentary is a deeply personal point of view directed by Donald Brittain Award-winner Phyllis Ellis.

In Girls’ Night Out young women reveal not only how they binge, but why. The film explores the glamorization of drinking through celebrity pop culture, target marketing by alcohol companies and how excessive drinking has become the go-to solution in this self-medicating, low self-esteem, anxiety-driven culture. With unprecedented access inside binge drinking culture, Ellis follows four university students engaged in binging, as well as women now in recovery. She examines this prevalent and dangerous culture with the eye of a reporter, the curiosity of an anthropologist, and the sometimes-wounded heart of a teenage girl.

Produced by Emmy-Award-winning filmmaker Peter Raymont, with Andrew Munger and Barri Cohen, Girls’ Night Out was inspired and informed by Canadian journalist and author Ann Dowsett Johnston’s best-selling “Drink, The Intimate Relationship Between Women and Alcohol.”

Immediately following the broadcast, filmmaker Ellis, author Ann Dowsett Johnston, and women from the film will engage online with the audience through a livestream (periscope and/or Facebook Live). The broadcast premiere also marks the launch of a wider campaign, #RethinkTheDrink, which hopes to ignite conversation among university and high school students across Canada.

Other elements of the #RethinkTheDrink Campaign will include:

Talkback Tour ~ March – May 2016 & Fall / Winter 2016
Starting with the broadcast premier the Talkback Tour will roll out across the country visiting 5-6 Canadian universities in March and May, 2016, then again in the Fall/Winter of 2016. The tour will include the Girls’ Night Out advisory panel and Q&A, opening the floor to university students to voice their concerns and share solutions about binge drinking in a safe environment. During the tour we will be documenting participant responses and inviting them to take part in a take-home digital survey. The talkback tour will be developed in consultation with the Canadian Centre for Substance Abuse (CCSA), and the information gleaned will be part of a report that will be presented at the annual meeting of the Campus Collaborative Caucus (CCCA) in June 2016.

“Dear 18-Year-Old Me” Letter Writing Mini-Campaign
This mini-campaign will drive the university-aged women we reach during the tour to ask themselves “What advice would you give your younger self?”. Compelling letters submitted by real women will offer expanded content for Canadians following the campaign in the social space. The letters will feature personal stories, anecdotes, advice and thoughts about binge drinking culture, the pressures of being a woman and how to forge your own path in ways that are funny, clever, serious and sad. This campaign will drive young women to submit compelling letters via the GNO Tumblr page. A selection of these letters will be featured on the online micro site and may be dramatized as social videos.

“Take-Home” Content for Parents
Take-home content will be a stand-alone and sharable guide, providing the secondary target audience – parents, with insights into talking to their daughters about navigating binge-drinking culture and the pressure they feel to participate. This will be housed on the CBC micro site and feature ways for parents to talk to their daughters about binge culture. This content will encourage moms and dads to become an active part of the conversation. Experts will be consulted in the writing of this content to ensure that it is current, appropriate and relevant.

The Making of nîpawistamâsowin: We Will Stand Up