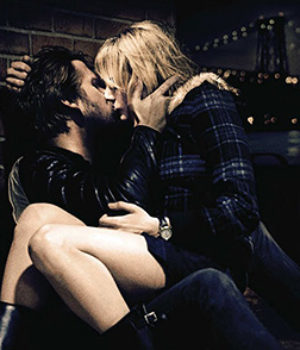 Considering his star-making turn as a neo-Nazi skinhead in 2001’s controversial film The Believer, it is hard to believe that Ryan Gosling began his career as a member of The Mickey Mouse Club, and the star of such weightless kiddie programming as Breaker High and Young Hercules.

Born November 12, 1980, in London, Ontario, and raised in a Mormon household, young Ryan Thomas Gosling was always encouraged to pursue creative outlets. He learned how to play the guitar, took singing and dancing lessons, and at the age of 13 years old beat out 17,000 applicants to join the cast of The Mickey Mouse Club alongside future singing superstars Britney Spears, Christina Aguilera and Justin Timberlake.

When The Mickey Mouse Club was cancelled in 1994, Gosling appeared in television series such as Are You Afraid of the Dark?, Ready or Not, Goosebumps and Road to Avonlea, for which he was nominated for a Gemini Award. He also won starring roles on Breaker High (1997), a series about a high school on a cruise ship, and Young Hercules (1998), in which he played the muscle-bound title character. But he repeatedly resisted offers of teen flicks and WB-friendly pilots, and even turned down an invitation from future Backstreet Boy A.J. McLean to audition for the boy band.

In 2000, Gosling appeared in his first feature, in a small role as a high-school football player. That film was Remember the Titans, starring Denzel Washington as the football coach of a newly racially integrated high school.

The following year, Gosling was singled out from among 150 other actors for what would become his breakthrough role in Henry Bean`s The Believer. He played Danny Balint, a young Jew who becomes a neo-Nazi skinhead. The film premiered at the 2001 Sundance Film Festival, where it won the Special Grand Jury prize. But its next high-profile 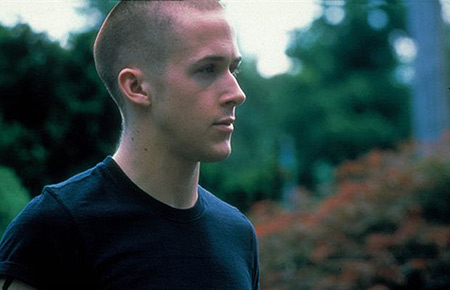 screening was scheduled for September 11, 2001, at the Toronto International Film Festival. All screenings that day were cancelled and The Believer was pulled from the rest of the festival schedule because of its violent scenes. The film`s unlucky timing and incendiary subject matter caused potential distributors to shy away. The Believer eventually aired on Showtime in late 2001, and Fireworks Pictures gave it limited US release in May, 2002.

Despite never having been allowed a large audience, The Believer was hailed for its directness and the impossible contradiction at its core. It was Gosling`s performance, however, which propelled the film. Portraying a character most people would consider inhuman and completely unsympathetic can make or break the career of a struggling young actor. His performance was described as “riveting,” “feral,” “impressive and terrifying,” “enigmatic,” “scarily convincing,” “passionate” and “fierce.” In 2002, he was nominated for Best Male Lead at the Independant Spirit Awards.

Playing Danny Balint was a startling contrast from the roles Gosling had played as a teenager, and the pressure was to follow up with another performance in another film of equal magnitude and depth. He was able to satisfy both his own standards and those of his critics by following up with a trio of high-profile dramatic roles. The strength of these performances – always strangely graceful, charismatic and subtle – added to his reputation as a powerful young actor.

In the acclaimed drama The Slaughter Rule (2002), he played yet another high school football player for whom everything suddenly seems to go wrong. He drowns his sorrows in a combination of self-pity, tequila and violence until he meets Gideon Ferguson (David Morse), who helps get him back on track.

In Barbet Schroeder`s Murder by Numbers (2002), Gosling played a bored rich high school student who teams up with a serial killer obsessed classmate (Michael Pitt), to plan and carry out the perfect murder. Sandra Bullock was the detective assigned to the case. Gosling`s performance as a cold, charismatic teen murderer was again lauded by critics, and the Chicago Film Critics Association nominated him for Most Promising Performer for both The Believer and Murder by Numbers.

After Murder by Numbers was released, Gosling became a popular subject with the Hollywood rumour mill. He and his co-star, Sandra Bullock, dated for over a year, raising eyebrows with their 16-year-age difference. 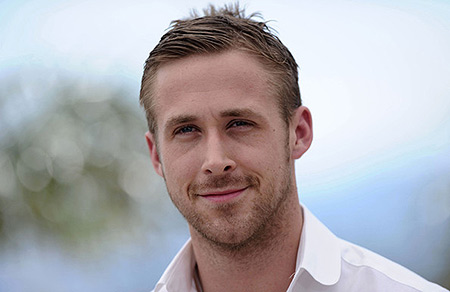 Fitzgerald, an intelligent but impassive young man who commits the murder and is sent to a juvenile detention center, where an aspiring writer and prison teacher tries to discover the reasoning behind the crime.

By 2004, he was already being touted as one of the best young actors of his generation when he took on a role very unlike those that he had played up until then. Directed by Nick Cassevetes, The Notebook tells the story of two young lovers who are separated by the Second World War, then reunited seven years later. The Notebook thrust Gosling firmly into the Hollywood spotlight and won him a legion of new (namely female) fans, and evidently the heart of his co-star, fellow Canadian Rachel McAdams, who he is currently dating. (The pair won the MTV Movie Award for Best Kiss in 2005). That same year, People magazine named Gosling one of its 50 Hottest Bachelors and the Show West Motion Picture Industry Convention named him its “male star of tomorrow.”

The following year saw the release of the ambitious indie Stay (2005), a thriller in which he plays a troubled art student alongside Ewan McGregor and Naomi Watts. And 2006 brought the release of Half Nelson, and the completion of two additional films, with all three following the steadily independent pattern of Gosling`s career.

Half Nelson premiered at the Sundance Film Festival, where it received a healthy amount of buzz and a Grand Jury Prize nomination for Best Picture. The dark independent drama is set in a Brooklyn middle school with Gosling playing another impossibly conflicted character, this time a well-intentioned teacher with an out-of-control drug problem.

In 2007 his fans were looking forward to the release of Fracture, directed by acclaimed television writer, producer and director Gregory Hoblit, who previously directed the thriller Primal Fear in 1996. Fracture told the story of an assistant district attorney caught in a cat-and-mouse game with a manipulative and dangerous man accused of trying to kill his wife. Gosling, who plays the ADA, shared the screen with Anthony Hopkins as the accused attempted murderer, Embeth Davidtz as his wife and David Strathairn as the DA.

In addition to his acting, Gosling is also an accomplished jazz guitarist and has appeared at Los Angeles’ Cat Club, performing his own songs. He has also contributed back up vocals on Canadian band Soul Decision`s 2000 CD, No One Does It Better.

Ryan Gosling appears to be on the fast track to stardom, but it`s a different path than the ones chosen by his one-time co-stars on The Mickey Mouse Club. Deliberately choosing independent features and trusting his instincts has appeared to pay off so far, as he continues to build his reputation as one the most intelligent and compelling actors of his generation. As if confirming his choices, in 2007 Gosling received an Academy Award Nomination for ‘Best Actor’ for his role in Half Nelson as Dan, a drug-addicted inner city junior high school teacher. He also garnered ‘Best Actor’ nominations from the Screen Actors Guild, the Broadcast Film Critics Association, the Film Independent Spirit Awards, the Chicago Film 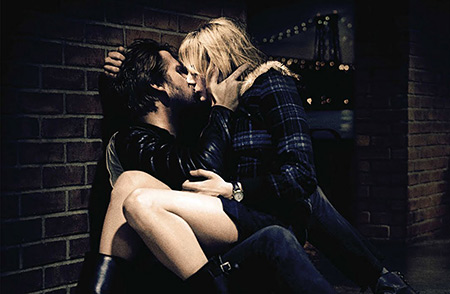 The following year Gosling was honored again with both a Golden Globe and SAG Actor nomination for his work in Lars and The Real Girl and once more by the Hollywood Foreign Press Association in 2011 for the drama Blue Valentine, opposite Michelle Williams, and written and directed by Derek Cianfranco.

In 2011, Gosling starred alongside Steve Carell and Julianne Moore in the marital crisis comedy Crazy, Stupid, Love; Drive, an action film directed by Nicolas Winding Refn; and George Clooney’s The Ides of March. The following year he started work on Warner Bros’ Gangster Squad. Directed by Ruben Fleischer, the film was released in early 2013. His fans are, as of March of 2013, still awaiting release of writer-director Terrence Malick’s latest project, which costars Gosling, Christian Bale, Michael Fassbender, Natalie Portman and Cate Blanchett, to list just some of the stellar cast.

Following Blue Valentine, Gosling worked again with Derek Gianfranco on the 2013 release, The Place Beyond the Pines, a movie that required its star to do some fairly risky stuff. As Gianfranco explained, “One thing Blue Valentine was noted for was its frank sexuality. Well, on Pines I wanted to approach the action scenes in the same way. That meant that Ryan had to learn how to ride a motorcycle. There is one scene in the film where Ryan has to go into a bank, rob it, leave the bank, get on his motorcycle, and drive at tremendously fast speeds through a busy intersection while he is pursued by a cop. All of this happens in a single take. No cuts. No place to do a “Texas switch.” So Ryan had to become very proficient on his bike. He trained with Rick Miller, one of the great Hollywood stunt men. And he just took our breath away. In order to get the scene completed, Ryan had to do 18 takes. It was a little crazy.”

Like many before him, Gosling has been tempted to step behind the camera. His first feature-length film, originally titled How To Catch a Monster but retitled Lost River was selected to screen at the 2014 Un Certain Regard section of the Cannes Film Festival. Shot in Detroit, the 105 minute film was also written by Gosling and stars Christina Hendricks of Mad Men fame.

Looking back over a little more than 20 years of credits, Gosling’s career was best summed up by New York Times critic, Manohla Dargis, who said the young Canadian actor continues to be noticed as “one of the most exciting actors of his generation.” His ever-growing legion of fans would definitely agree.

This biography is Copyright © 2014 by Catherine Solmes and may not be reproduced without prior written permission. For more information about copyright, click here.