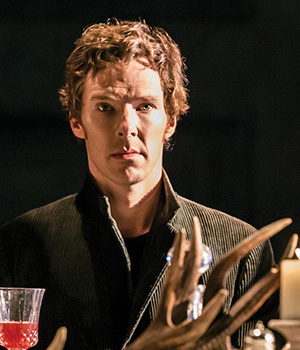 (October 2, 2015 – Toronto, ON) If a contest were held today to decide who was the most popular between William Shakespeare and Benedict Cumberbatch, chances are the Bard of Avon would not come out on top. But put the two of them together and you’d have a winning combination and that’s just what London’s National Theatre has done. The great news is, you won’t have to travel to London to see Cumberbatch live on stage in a production of Hamlet because Cineplex Entertainment has announced that their Front Row Centre Events will present a live broadcast of the most buzzed about theatrical show in London’s theatre history.

The production will be broadcast live via satellite on October 15 through National Theatre Live, an initiative operated by the Royal National Theatre in London. Tickets to see Cumberbatch’s take on Shakespeare’s tragic hero are available now for screenings at select Cineplex theatres across the country. Encore performances will be shown on November 7, 8, 9 and 11.

“This production shattered records with reports that tickets for the show’s 12-week run sold out in mere minutes with an online queue that exceeded 30,000 people,” said Brad LaDouceur, Vice President, Event Cinema, Cineplex Entertainment. “We’re excited to bring the best of British theatre and Benedict Cumberbatch live from the London stage to cinemas here at home in Canada.”