It’s always a bad sign when Canadian films are released at the end of the year. It means that the distributor is in effect “dumping” them to compete with the American blockbusters released in time for the holiday season or Oscar consideration. Two such films open in Toronto this weekend, Larry Kent’s Hamster Cage and Carl Bessai’s Unnatural and Accidental. Apart from the lack of faith shown by their respective distributors, the two have other traits in common. Both are from the West Coast and both are low-budget art-house style films striving to say something “important” about the state of the human condition with big ideas, which sadly fall short of the mark.

First up, Hamster Cage. Larry Kent is the aging critical darling from the distance past. His first spat of films – including The Bitter Ash (1963), Sweet Substitute (1964) and High (1968) – were antiauthoritarian, stylistically brash and sexually frank dramas of post-adolescent angst that pushed boundaries, upsetting both critics and censors. High was banned in Ontario and British Columbia for its depiction of drug use. Following a move to Montreal for a brief stint at the National Film Board of Canada, his work – often skeptical assessments of 1960s idealism and 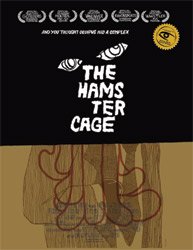 groundbreaking examinations of feminist themes – led him into the margins and he almost disappeared from view. Recently, he is experiencing a resurgence of sorts. His earlier films are showing up regularly on cable television and were the subject of a recent retrospective that travelled the country. So at the age when most people have retired and are putting their feet up (he will be 70 in 2007), Kent stepped behind the camera once again to direct Hamster Cage.

Unfortunately, the film will do nothing to enhance his reputation. It’s a pared down six-hander about Phil, an overbearing, egotistical physics professor and recent Noble Prize winner, who oversees a family of childish perverts, with many skeletons in their closets. To celebrate his win, the family gathers at the Vancouver homestead. There are Paul and Lucy, his estranged son and daughter respectively, his long-suffering wife Jenn, his brother Stanley, and Stanley’s nubile young conquest, the aptly named Candy. To set things in motion, Stanley brings gifts for all, each revealing something about the past of the recipient. It’s a hoary theatrical device, which doesn’t improve with age. In fact, much of this black comedy is stagy and lacks dramatic drive.

It’s revealed that their father raped Stan as a boy while Phil watched, and consequently Phil thought father loved him best. Phil in turn deliberate drove into Jenn, breaking both her legs. She was an accomplished ballerina, and he was jealous of her success. Stan messed with Lucy when she was a child, and Phil, who knew this was happening, did nothing about it, while Jenn has a thing for son Paul, who reciprocates. The amoral fun-loving Candy just wants to blow every man in sight.

Ninety minutes with this messed-up version of The Brady Bunch is 90 minutes too much. Kent livens the proceedings with dark humour – Lucy repeatedly and unsuccessful tries to kill Stanley, first with a toilet plunger, then with a shovel. She and Paul even bury him at one point, although apparently you can’t keep a good pedophile down. What on earth Kent was thinking is anyone’s guess. However, what’s on screen in Hamster Cage is one sick view of humanity that deserves, like Stanley, to be buried alive.

Unnatural and Accidental is marginally more accomplished cinematically, although just as unpleasant. Director Carl Bessai is the Young Turk of the West Coast scene, with a growing reputation for provocative art-house dramas. His previous features include Johnny (1999), Lola (2001) and Emile (2003), were he flirted with Dogme 95-style filmmaking. None of the three created a ripple at the box office, but that hasn’t slowed him down or prevented him from receiving funding for his next project from various government agencies. Unnatural and Accidental is his latest effort to impress festival audiences and cultural bureaucrats, if not the movie-going public at large.

It’s based on Marie Clements’ The Unnatural and Accidental Women, and she wrote the screenplay. Clements is a Métis playwright whose concern is with the abandoned First Nations women of Vancouver’s notorious Lower East Side, a hellish place infected by cheap drugs and prostitution, and the title refers the fate of those women who die under mysterious circumstances, suggesting foul play while avoiding any sense of responsibility.

The film version concentrates on Rebecca (Carmen Moore) who comes to this hellhole in search of her mother (Tantoo Cardinal), and a charming psychopath (Callum Keith Rennie) who literally kills his victims with drink. He pays these pathetic women to “play” a drinking game, whereby he offers them money to share a drink with him, then when they are sufficiently intoxicated, he forces whiskey down their throats until they pass out and then he rapes them, or they die of alcoholic poisoning, leading the authorities to claim their deaths were accidental or unexplained.

The film comes with the claim that the events portrayed are based on real-life case studies, and has echoes of the Vancouver area pig farmer currently facing 22 murder charges of prostitutes and street women, many of them Aboriginals. However, Bessai has chosen to sensationalize the material with distracting a hallucinogenic style, where fantasy merges with reality and characters assume iconographic status. A naked women placed dead on a morgue slab awakens to complain of the cold; photographs come to life and speak; and ghosts of dead Native women come back to hunt the killer.

Unnatural & Accidental provides no substantive background to these women, no sense of where they came from and how they got to such a dreadful place. They are victims, ready for the plucking, and killer’s character is equally shallowly drawn. He`s simply a vengeful racist with no history or motivation other than pathological hate. The social concerns expressed in the film are too important to be treated so lightly and in such an exploitive fashion. What may have worked as a tense ensemble drama on the stage comes across as a Canadian version of Death Wish, with very little to recommend it.

These reviews were written for Northernstars.ca by Wyndham Wise, the former publisher and editor-in-chief of Take One: Film in Canada. It is Copyright © 2006 and may not be reproduced without prior written approval. Click here for more information about copyright.