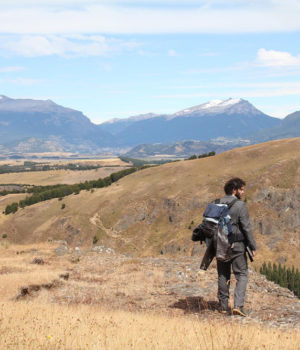 (June 10, 2016 – Toronto, Ontario) It could just be me but I have always found a delightful quirkiness about the films of Ingrid Veninger. Could be because the first film I saw her in was the decidedly odd The Limb Salesman. She was one of the producers of Anais Granofsky’s film, co-writer with Granofsky and one the actors in the 2004 drama. Her film, The Animal Project was wonderfully different. So, when I sat down to watch her 2015 film, He Hated Pigeons, I figured, by the title alone, that I knew what I was in for. Was I ever surprised. If you’re not supposed to judge a book by its cover, never judge a film by its title.

He Hated Pigeons is, in a way, the most accomplished film Veninger has produced, written and directed. I don’t mean “accomplished” to mean “professional,” as all of her films have been wonderfully executed despite sometimes working with minuscule budgets. This film is different.

It’s a love story wrapped in loss but framed in discovery. Set in Chile, the short strokes are a young man (Elias) has lost a friend and lover and as we get quick glimpses of their life together in flashbacks we share a journey the survivor is making largely to fulfill a promise and to find some form of freedom. That’s the story. How it is told is all important.

It would seem as if Veninger’s vision for this film was to underscore loneliness. The choice of locations from the seemingly lifeless Atacama Desert west of the Andes to the final scenes of lush and living forest, finds our solo traveller placed in a series of spectacular and beautiful landscapes worthy of a National Geographic documentary, yet he is fully alone. His few encounters with fellow travellers are brief — one of them Veninger herself playing a hitchhiker — and when Elias does establish a relationship it is with a stray dog.

The device of man set against the enormous emptiness of broad landscapes has been done before but never more effectively than in this film. There is no sense of danger, no threat from the towering peaks, no potential evil lurking in the shadows just beyond a tent brilliantly lit from its interior but surrounded by what must have been a starless, moonless night. There is, however, the almost overwhelming idea that

in all this wonderful world nothing exists if there is no one to share it with.

He Hated Pigeons is a sparse film. The 80-minute production contains perhaps only 10-minutes of dialogue. This too reinforces the sense of being alone. The camera lingers on the landscapes, and there is much to see, much to love about this film. By time it ends I doubt the audience will have bonded with Elias, despite a wonderful portrayal by first time actor Pedro Fontaine. But I don’t think that was the objective. Where this film should leave you is with the knowledge that all we have should be shared with others despite the vast and often empty distances that may lie between us.

Always inventive, always looking for new ways to tell stories, the music, or absence of it, in this film is, perhaps, that nod to Veninger’s quirkiness. As I have written here before, and others have written elsewhere, music in film is usually there to tell you how to feel. Veninger’s idea was to use live music. There is a mix that has been scored and recorded but the plan was always to bring something new to each new screening. Writing on the film’s Indigogo fundraising page, Veninger stated “we want to invite local musicians in each city to improvise their own version of the score – live – in front of the audience. Anything could happen! On the big screen, this film will never be experienced the same way twice.”

When He Hated Pigeons opens the 14th annual Female Eye Film Festival on Tuesday, June 14th the music will be performed by the remarkable, inventive Jane Siberry. An experience not to be missed.

Ralph Lucas is the founder and publisher of Northernstars.ca. He began reviewing movies while in radio in Montreal in the mid-1970s. This review is copyright © 2016 and may not be used with written permission. Click here for more about copyright.