Home News Archive Heart of the Sea in Montréal 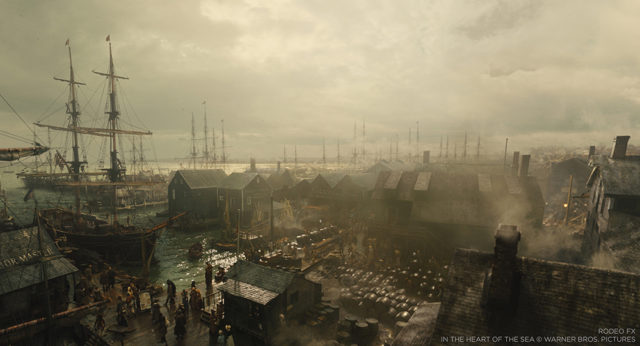 (January 28, 2016 – Montréal, Québec) It’s Ron Howard’s latest blockbuster. Set in the early 1800s. In The Heart of The Sea follows one Own Chase who is offered a spot as First Mate on the New England whaling ship Essex. The problem is, Chase, wonderfully portrayed by Chris Hemsworth, was promised a position as Captain on the voyage, but George Pollard (Benjamin Walker), the less-experienced son of a wealthy sailing family, has been given that post instead. Chase almost turns it down, but when he gets a promise in writing that he won’t be overlooked next time, he agrees to sign on. Under Pollard’s inexperienced direction, the sailors endure hardship and although they harpoon and kill one whale for its oil, they don’t want to go back home until they’ve found more. They sail south where they hear there have been whale sightings. As they’re about to harpoon more whales, the vessel is attacked by a whale of mammoth size and will. The real-life maritime disaster went on to inspire Herman Melville’s classic novel, Moby-Dick.

The first thing that should be obvious is this isn’t the early 1800s, and to bring this film to life with all the realism the story requires is going to take some highly talented visual effects artists. Enter this city’s Rodeo FX and visual effects supervisor François Dumoilin. Charged with creating a 19th-century Nantucket whaling village, the work would require concept art, seamlessly interwoven set extensions, and evocative matte

painting for a total of over 260 visual effects shots. Rodeo’s work demonstrates the power and impact of visual effects, not only for bringing period films to life, but also expanding the storytelling pallet by conveying drama and atmosphere in support of the unfolding narrative. In the Heart of the Sea has been nominated for a VES Award in the Outstanding Supporting Visual Effects category.

“It was a detailed set and provided an excellent starting point for constructing the rest of the town,” said Dumoulin. “Our task was to expand the physical set, filling the space with hundreds of realistic houses and industrial buildings that lead down to the ships on the wharves, with all the pollution of the whaling industry, and finally out to sea. It’s a visual journey that gives the audience a sense of time and place.” 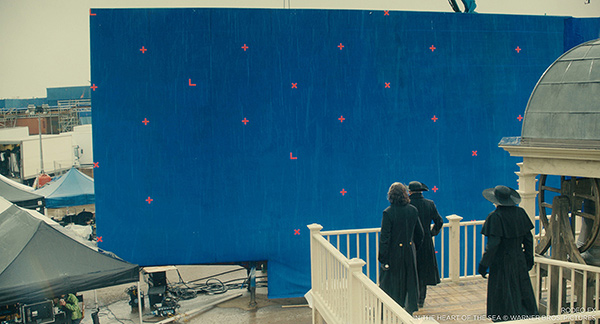 Rodeo FX modeled about 20 different buildings, basing their construction on common 19th-century architecture, including period windows, doors, roofs, and chimneys, and refining these based on feedback from Mark Tildesley, the production designer on the film.

“We ensured realism by referencing old maps and pictures of Nantucket as well as photos from the Leavesden set,” said Dumoulin. “Then we worked Ron’s feedback into our concepts to accent and augment the historical representation of the town to support his vision for the storytelling. An entity, such as a town, is like a character in a story so the qualitative details, such as scale, perspective, mood, all contribute to that character, and thus the story itself.” 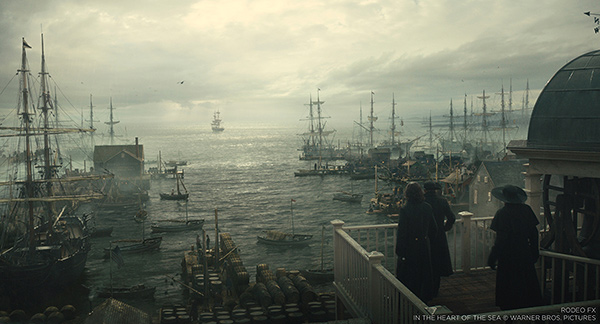 Adding to the complexity of the task, Rodeo FX arrayed their virtual Nantucket over a rolling landscape taken from images of an unpopulated island in the Canary Islands. To accomplish this, the team combined plates of the practical set with its CG set extensions, then crafted matte paintings to recreate the feel of a village bustling with the industry of whale oil production.

In the Heart of the Sea covers three distinct periods from 1819 to 1850, during which Nantucket grew rapidly. For each era, Rodeo FX had to adjust the look of the city by altering its CG asset and digital matte paintings.

“We reused most of the model for each iteration as Nantucket went from being a village to a city,” said Olivier Martin, VFX art director and concept artist at Rodeo FX. “For the city of 1850, we redid neighborhoods, replacing houses with industrial buildings in some areas, adding more ships, piers, and whaling boats.

“Ron and Mark [Tildesley] wanted to show the contrast between the beautiful untouched coast of Maine and the pollution created by the whaling industry in the city itself,” Martin explained. “To support this theme in the film’s narrative, we designed our Nantucket to be dirty, from the chimney smoke and the extraction of whale oil on the beaches.”

To create concept art for Nantucket, Martin looked at 19th-century artists such as Turner, Sargent, and John Atkinson Grimshaw for inspiration. “Studying these painters gave us ideas of how to depict the era,” he said. “The mood, the light, and the composition of their paintings helped bringing new visual ideas to our work.”

The art department built a full-scale replica of the actual Essex, floating it within the tank at Leavesden. The ship rested on a gimbal rig that allowed it to be moved to mimic a ship’s rolling on the waves. Scenes of the Essex sailing on open water were shot in the tank as well as at sea. Rodeo FX had to ensure continuity between the two types of shots, for which they used a combination of practical footage from the production, together with their CG water assets, creating waves and the look of wind on water.

“We had to extend the water all the way to the horizon,” said Mikaël Damant-Sirois, CG Supervisor at Rodeo FX. “We made lots of CG water so we could match the different types of water. We made the tank water darker and more dramatic to simulate the roiling sea.” 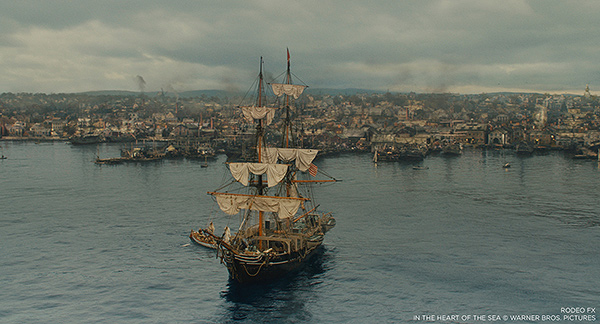 One shot that highlights the combination of practical assets with CG set extensions and matte painting occurs as the Essex leaves port for the open sea. The camera hovers above the ship and swoops around, doing a 360-degree reveal of the sea and the bay of Nantucket. Rodeo FX replicated this intricate camera move in CG, then extended the sequence to reveal more of the city. Once the client was happy with the shot composition, Rodeo FX added lighting to the 3D model, adjusted details such as matching the sky to that on the plates, and then completed a CG render.

“With huge camera movement like this, we have to keep the parallax to maintain the depth of the image,” said Damant-Sirois. “We divided the render into multiple layers, created a matte painting on each layer, and then re-projected the layers and handed them off to our compositing team.”

Chimney smoke, mist, seagulls, and city movement including sailors walking on the streets were added as practical or CG elements.

“We enjoyed bringing to life Ron Howard’s vision of this amazing and touching true story,” said Sébastien Moreau, president of Rodeo FX. “We take great pride in supporting powerful stories by recreating past eras and real environments with invisible visual effects. It is very gratifying when beautiful imagery marries itself seamlessly to a great film.”

Distributed by Warner Bros. Pictures, In the Heart of the Sea was directed by Ron Howard and stars Chris Hemsworth, Ben Whishaw, and Cillian Murphy. The film had its theatrical release on Dec. 11 and is still playing in Canada and elsewhere.

Founded in 2006 by Sébastien Moreau, Rodeo FX has grown to over 320 accomplished artists and professionals with studios in Montreal, Los Angeles, and Quebec City.