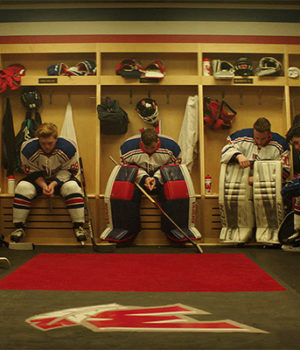 (June 5, 2017 – Vancouver, BC) Yesterday was the final round for the 2017 Leo Awards, which honour the work of British Columbia filmmakers. Similar to the Canadian Screen Awards, there are so many categories the Leos span three different ceremonies. Yesterday was the final Gala where the stars came out to join in the celebrations.

There always seems to be a big winner at these affairs and this year it was Kevan Funk’s night when his debut feature, Hello Destroyer, picked up four of the top awards including Best Motion Picture, Best Direction, Best Screenwriting, and Best Lead Performance by a Male for Jared Abrahamson. The film had also won a Best Cinematography Leo on Saturday night making it a total of five for Funk’s feature. Abrahamson had previously been recognized for this work in this film with an award for Best Actor in a Canadian Film at the 2016 Vancouver Film Critics Circle Awards. He was also recognized as a “TIFF Rising Star” in 2016.

Funk first visited the theme in this film with his 2014 short, Destroyer. It’s the story of how a young athlete’s world is turned upside-down after he witnesses a disturbing crime. The award-winning 2016 Hello Destroyer centres on a minor league hockey enforcer who gets ejected from a game after a violent, dirty hit.

In a statement about Hello Destroyer, Funk said, “Like the vast majority of my short film work that i have made leading up to this, the film is intended to be engaged in social and cultural criticism.”

Other Leo Awards handed out yesterday include best Supporting Performance by a Male, which went to Eli Goree, for his role in the Jesse Owens bio-pic Race.

Rogue, a police drama set in California but shot in Vancouver was given the Best Dramatic Series award. Last year’s winner was Motive, and this year star Kristin Lehman was recognized with a Lead Performance – Female for her work in that series. Jonathan Scarfe won Lead Performance – Male for his work in the series, Van Helsing.

Winners from all three Leo Award nights are listed online at the Leo Awards website.