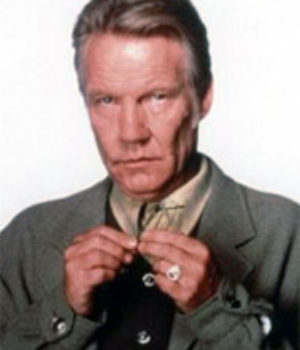 There is much written and said about the number of Canadians who seek their fame and fortune on foreign shores. David Hemblen helps to provide the balance as he, and so many others, who were born elsewhere have decided to come to Canada, or stay in Canada after being brought here when they were young.

Hemblen grew up in Toronto, Ontario, and like many talented young people, he sought to complete his education at the University of Toronto. In fact, he had already received an M.A. in English and was working towards a PhD in medieval studies when he was spotted during a rehearsal of a university theatre production. The man who spotted him was Clifford Williams of the Royal Shakespeare Company. Hemblen was offered a season at Toronto’s Royal Alexandra Theatre, and never finished his studies. Not that he needed to. He’s had a healthy career in theatre, film and television as both an actor and director. He has appeared in more than 20 series and 30 films, and his stage career includes more than 70 productions as actor/director at major Canadian theatres. He has appeared at the Stratford Festival and he spent four seasons at the renowned Shaw Festival in Niagara-on-the-Lake. For his portrayal of Dr. Astrov in Toronto’s Tarragon Theatre production of Uncle Vanya, Hemblen received a Dora Award nomination for Best Actor. He received a Genie Award nomination as Best Actor in Family Viewing.

This mini-biography is Copyright © 2002 by Ralph Lucas and may not be used without prior written permission. Click here for more information about copyright.