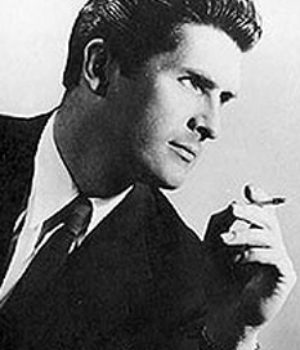 With the outbreak of World War Two, Hockridge inlisted with the Royal Canadian Air Force in 1940 and found himself in England in 1941. Trained in aircraft maintenance, he arrived in Britain the following winter where he helped to establish the Allied Expeditionary Forces Network, which broadcast entertainment and news to the troops in Europe. He often worked with the legendary Glenn Miller Band as well as the Canadian band of the Allied Expeditionary Forces led by Robert Farnon. It is thought that he sang and produced more than 400 shows with the BBC Forces Network. As the war ended he sang with some of the popular British big bands of the day, such as Geraldo’s.

After the war and back in Canada in 1946, Edmund Hockridge played leading roles in operas such as Don Giovanni, La bohème, Peter Grimes as well as appearing in Gilbert and Sullivan operettas. He also hosted his own musical show heard across the country on CBC. Returning to England, he got an unexpected break when, shortly before Christmas 1950, he was invited to take over from the American Stephen Douglass (whose work permit had expired) as Billy Bigelow Rodgers and Hammerstein`s Carousel at the Theatre Royal, Drury Lane. He appeared in some 1,300 performances, both in London and when the musical made a provincial tour. When that end in 1953 he went on to play Sky Masterson in Frank Loesser`s Guys and Dolls at the London Coliseum, one of only two non-Americans in the cast.

Other musicals included Can Can and The Pajama Game, which lead to him becoming a major recording artist, with hit songs such as “Young and Foolish”, ”No Other Love”, ”The Fountains of Rome” and ”More than Ever”. A song from The Pajama Game, ”Hey There”, gave 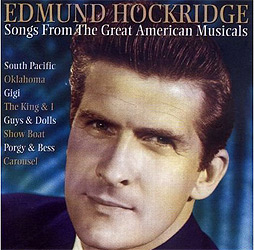 Hockridge his biggest hit and his signature tune. During the 1950s Hockridge recorded a series of 11 albums of show tunes and made frequent guest star appearances on television.

He appeared in early editions of The Benny Hill Show, Sunday Night at the London Palladium and he starred in a six-month, sell-out variety season at the Palladium. In 1953 he was in the Royal Variety Show and the same year he was Canada’s representative in the Westminster Abbey choir at the Coronation. He headlined in cabaret on the QE2’s maiden voyage and he toured Europe in revivals of musicals. He also turned to British summer seasons and Sunday concerts, becoming one of Blackpool’s most popular stars. He topped the bill on Blackpool’s North Pier for seven years and appeared in several of Harold Fielding’s Opera House concerts in the 1960s.

In 1984 and at an age when many people start to think about retirement, Hockridge appeared in a revival of The Sound of Music with Isla St Clair at Chichester, and in 1986 played the elderly Buffalo Bill in a revival of Annie Get Your Gun, with the rock star Suzi Quatro in the role of Annie. In the 1990s he went back on the road with The Edmund Hockridge Family, a show in which he was joined on stage by his second wife, Jackie, and two of their sons, Murray and Stephen.

During his 50-year career Hockridge worked with an array of old-style stars, including Tommy Cooper, Eartha Kitt, Max Wall, Roy Hudd, Cliff Richard, Billy Dainty, Morecambe and Wise, and Petula Clark.He never properly retired and even in his eighties he was still making public appearances and giving talks about his long career. Edmund Hockridge was 89 at the time of his death.