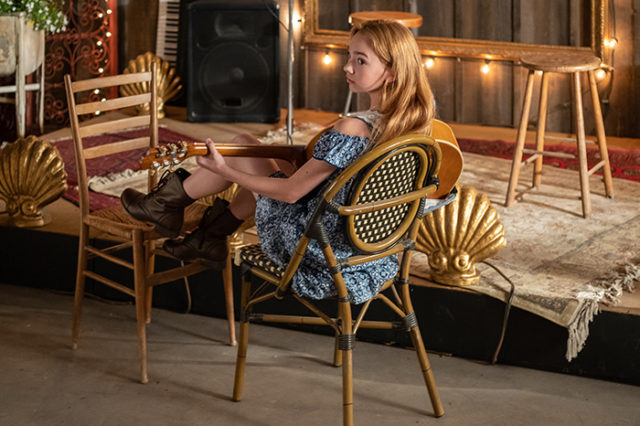 (May 17, 2018 – Toronto, ON) The idea of bringing cartoon characters to life is nothing new. In 1967, decades before Spongebob Squarepants made it to Broadway, Your a Good Man Charlie Brown wowed them on the Great White Way. The comic strip Blondie was made into a TV series in 1957. Now in a case that could be art imitating life imitating art, Holly Hobbie, a new live action TV series has begun production in Toronto.

Let’s begin at the beginning. The real life Holly Hobbie was born in 1944. She grew up to become a writer and illustrator. In the late ’60s she created a cat-loving, rag dress-wearing little girl in a giant bonnet. She eventually sold the character to the greeting card company American Greetings and the then nameless character identified only as “blue girl” became a hit.

Renamed after its creator, Holly Hobbie the greeting card character was turned into a doll in the mid-1970s. The doll became an animated character on TV and in a series of movies usually released on DVD. Now a cast of real people has been assembled and the 10-episode series, described as a “contemporary new tween drama,” is being shot in Toronto and Hamilton. It is scheduled to make its debut this fall in the US exclusively on Hulu, followed by its Canadian debut on Family Channel.

This version of Holly Hobbie remains a dreamer and a doer. She’s now a 13-year-old singer-songwriter who’s got her best friends and close-knit family by her side, but she’s dreaming of ways to save the world – even if it’s starting in her own backyard.

The American actor Ruby Jay (pictured above), who has a slim list of appearances on shows like Modern Family and Grey’s Anatomy has been cast as Holly Hobbie. The main cast is made up of both relative newcomers and some notable Canadian stars. Here’s a list of who’s who in Holly Hobbie:

As the series has just begun production, no firm first broadcast date has been announced.