(September 29, 2017 – Toronto, ON) A year ago, at the tail end of TIFF, I accepted an invitation from the Ontario Media Development Corporation to join the Festival’s Producers Lab on a tour of Toronto film locations, among them: the Distillery District (a stand-in for, among other things, a Nazi concentration camp in X-Men), the Macdonald Block in Queen’s Park (which frequently portrays the CIA headquarters in Langley, Va.), and the Flatiron Building on Front St., which is often what you’re seeing when you “see” New York’s Flatiron building onscreen.

My biggest disappointment that day, a visit to Pinewood Studios, where I was halted at the door to the bridge set of Star Trek: Discovery. Press weren’t yet allowed to visit (and through a crack in the door, I could tell the “set” mostly amounted, at that point, to piles of lumber). I consoled myself with a visit one studio over where they were shooting the movie of Stephen King’s It. There I was allowed to examine the “sewer” through which “The Losers Club” chased down Pennywise The Clown. But as both Star Trek: Discovery and It continue to make a post-release impact, and the fall/winter film and TV production season cranks up, Hollywood North may once again be sitting precariously atop a roller coaster.
Last year, a record $1.7 billion worth of production went on in Ontario, supporting an estimated 35,000 jobs – powered by a 76¢ dollar. It broke the previous year’s record of $1.5 billion, when the dollar bottomed out at 75¢.

And before that? Hollywood North was almost wiped out when the Canadian dollar reached heights of a few cents above par with the U.S. following the 2008 financial meltdown. Friends and neighbours who’d worked in the film business for decades – as grips, sound engineers, prop managers, etc., – quit for good. Or at least it seemed that way, until they started getting frantic phone-calls a few years ago, begging for them to return.

And now Netflix is wrapping itself in the Canadian flag, promising $100 million a year in production for five years. Of course, the company is already spending hundreds of millions here (including co-productions of shows like CBC’s Anne and Alias Grace), because it’s cheap to do so. A year or two down the road though, who knows? We could be holding them to a deal that’s no longer profitable for them.

I say all this now that the dollar is back above the 80¢ mark, with interest rates going up and business analysts bullish on the Canadian economy. (And next to financial analysts, no one watches the loonie more closely than film people.)

And I remember the ‘90s and early ‘00s, when we had a 63¢ dollar and people were practically being dragged off the street to work as production crew.

So, on behalf of my friends in “the business,” here’s hoping the Loonie cools off and their jobs stay safe.
And here’s a handful of experiences you could only have in Hollywood North.

– The Batmobile chasing The Joker down Yonge Street for Suicide Squad (Warners, breaking with tradition, actually encouraged the public to shoot video and post it online).
– Getting stuck in traffic behind a flat-bed truck, upon which was a convertible being “driven” by Eugene Levy, with Samuel L. Jackson riding shotgun. The movie, a comedy called The Man, wasn’t very good, but we kept pace behind its stars for a mile or so as they pretended to drive.
– Not my last contact with The Man. While negotiating a union contract with the Toronto Sun at the Grand Hotel, we decided to kill a lull between offers in the gym. I wound up on a treadmill next to Jackson on an elliptical. We acknowledged each other with a nod and I gave him his space.
– Spending a night as a zombie on Dawn Of The Dead (a job as an extra I took for a story), getting up over and over again, surrounded by pyro and hungrily chasing comedian/actor Boyd Banks all night.
– There is a limit to what we’ll do for Hollywood. Erstwhile action filmmaker Renny Harlin was outraged after his request was turned down to close the Peace Bridge for a scene in his flop The Long Kiss Goodnight. Gosh, close the second-busiest crossing between Canada and the U.S.? That wouldn’t 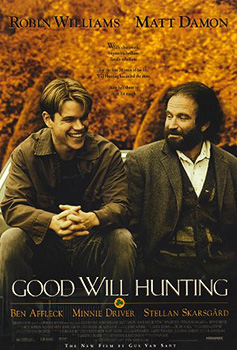 inconvenience anybody. Harlin ended up using the toll highway 407, then still under-construction.
– Seriously no longer welcome in Ontario, Harlin then went on to shoot scenes at historic Windermere House in Muskoka. The place, which also hosted scenes from Anne Of Green Gables, was
totally destroyed by a fire, reputedly caused by the production lights.
– That time Good Will Hunting shot on the next street over from my house. Robin Williams spent his time between shoots signing kids’ hats and t-shirts.
– That time the production manager of a Canadian TV series shoot went door-to-door on our street handing us $50 bills as recompense for their Winnebagos taking up every parking spot.
– An artist friend with no particular interest in celebrities found himself sharing Monday night beers and talking about art in his local pub with a friendly Scandinavian. A few weeks in, somebody told him his weekly beer buddy was named Mads Mikkelsen, and was starring in a TV series called Hannibal.
– The wardrobe and prop sale they held in a giant warehouse in Mississauga when Queer As Folk was cancelled after shooting in Toronto for five seasons. Much of the clothing was Italian designer, most available for a few bucks. And if you were REALLY a fan of the show, they had the clothes separated by character. Many customers came from Pittsburgh, where the show was located but not shot.
– Degrassi Street. It’s only a few blocks long, but thanks to the globally-popular TV series, it’s one of the world’s most stolen street signs – at a rate of about 12 a year.