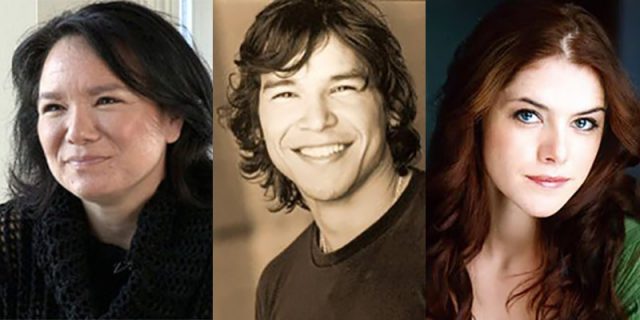 Jennifer Podemski (First Nations Saulteaux) has enjoyed a multi-faceted career as an actor, producer and facilitator running production workshops for Native youth throughout Canada. For the series The Rez, she won Best Actress at the Dreamspeakers Aboriginal Film Festival and the American Indian Film Festival as well as winning the 1996 James Buller Award for Female Performer of the Year.

Nathaniel Arcand is a Plains Cree (Nehiyaw) from the Alexander First Nation Reserve. His first small break came when he was cast in the role of Tree-Climber in 1994’s Savage Land but it wasn’t until he landed a role in the television series North of 60, playing William MacNeil, that his career really took off. Best known now for playing the role of Scott Cardinal in 85 episodes of Heartland between 2007 and 2018, look for him in the role of Clinton Skye in the 2020 series FBI: Most Wanted.

Kaniehtiio Horn was born in Ottawa and raised in Kahnawake, a Mohawk reserve just outside of Montréal, Québec. A graduate of Dawson College’s DOME Theatre Program in 2005, she has worked consistently over the last 15 years. She was nominated for a Gemini Award for her role in the made-for-television film Moccasin Flats: Redemption. Her mother is the well known Kahn-Tineta Horn, a Mohawk former model and a political activist for the Kahnawake First Nation.

The foundation of Northernstars is the desire to create a true star system so that our filmmakers become household names, known far and wide for their work. Today’s instalment of our 2020 series on Indigenous Canadian Filmmakers is part of that work.