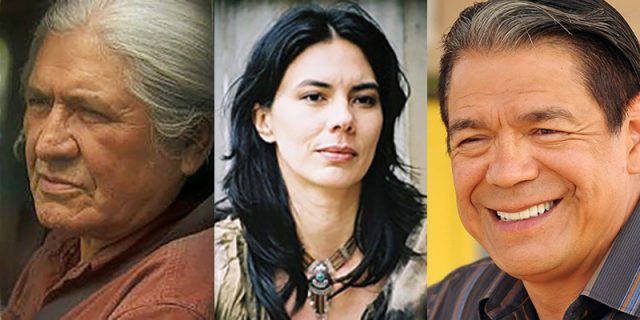 (June 17, 2020 – Toronto, ON) Our tribute today is focused west. Two of the three people we are featuring were born in Saskatchewan and one in Alberta. All three are actors and one is also known for her work as a director. Pictured above from left to right are Gordon Tootoosis, Gail Maurice and Lorne Cardinal, probably the best known of today’s Indigenous filmmakers. Together they have 201 credits in film and television.

Gordon Tootoosis, who passed away in 2011, was a descendent of the legendary Plains Cree leader Poundmaker. He was a survivor from one of the infamous Catholic residential schools. His interest in cultural traditions led him to become an accomplished native dancer and he broke into film in 1972 appearing in Alien Thunder, which starred Donald Sutherland and Chief Dan George.

Gail Maurice is a Metis actor, director and writer. As an actor a recent credit includes 2019’s The Incredible 25th Year of Mitzi Bearclaw. She has five credits as a Director and her first film, a documentary titled Smudge screened at the 2006 Sundance Festival. She wrote the screenplay and costars in a film that seems to have taken its inspiration from Brexit. Titled Québexit the story is set on the Québec-New Brunswick border where a conflict erupts between the new Québec military, the Canadian Armed Forces and two indigenous women who traverse the border frequently. It should be ready for release this year, but this year is anything but normal due to the Covid-19 pandemic.

Lorne Cardinal is best known for playing Sgt. Davis Quinton in five seasons of the series, Corner Gas. He studied at the University of Alberta’s Acting Program and graduated in 1993 with a Bachelor of Fine Arts. His first professional acting gig came a year later when he had landed a role in the series Hawkeye. He appeared in five made-to-television movies and made his big screen debut in 1999 in The Strange Case of Bunny Weequod.