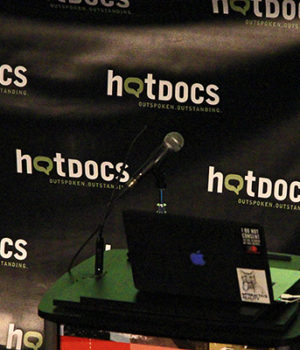 (February 10, 2016 – Toronto, ON) Hot Docs Canadian International Documentary Festival and the R & M Lang Foundation have announced that When the Dust Settles, a new film to be directed by Elle-Máijá Tailfeathers, has been chosen to receive a $10,000 production grant from the CrossCurrents Doc Fund in its third round of disbursements. Established in November of 2013, this international production fund aims to support short and mid-length documentaries from emerging filmmakers working within communities whose perspectives have been historically underrepresented or marginalized.

“We’re delighted to support Elle-Máijá Tailfeathers’ film When the Dust Settles,” said Robert Lang, Toronto-based documentary filmmaker and chair of the R & M Lang Foundation. “The film’s inside perspective, exploring how a First Nations community tries to move on from trauma and

addiction through traditional healing will, we hope, be inspiring and enlightening.”

The film is about something that’s been in the news far too often lately, particularly the death count. It’s about Fentanyl, an opiate fifty times stronger than heroin, claimed 20 lives on the Blood Reserve in 2014, leading tribal authorities to declare a state of emergency. When the Dust Settles is the story of one community’s response to crisis and the long road forward.

The CrossCurrents Doc Fund was generously established by the R & M Lang Foundation and is administered by Hot Docs. Each year, the Fund provides one successful applicant with a grant of $10,000. In addition to the production grant, When the Dust Settles director Elle-Máijá Tailfeathers will receive a Hot Docs Fellowship, which includes travel, accommodation, and accreditation to the annual Hot Docs Festival and enrollment in the Doc Accelerator program and mentorship initiatives.

Hot Docs is North America’s largest documentary festival, conference and market. It will present its 23rd annual edition from April 28 – May 8, 2016.