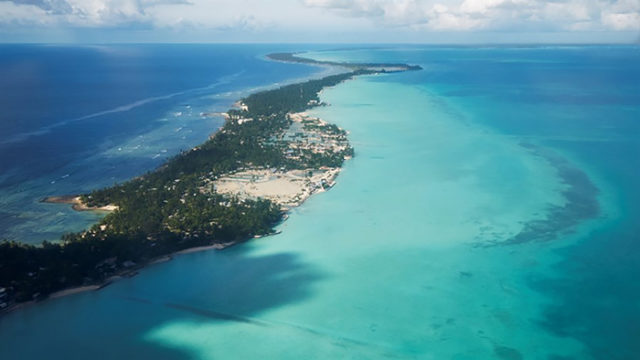 (May 2, 2018 -Toronto, ON) Something old, something new at Hot Docs today. Some films will have their first screening, some their second and in one case it’s only screening and in another its last.

Things kick off early at 10:15 with Anote’s Ark. It isn’t a real ark, but it is surrounded by water and water levels are rising. The 75-minute doc from Matthieu Rytz tells the story of the Pacific Island nation of Kiribati (population: 100,000), pictured above. It is one of the most remote places on Earth, yet it is one of the first countries that must confront the main existential dilemma of our time: imminent annihilation from sea-level rise. While Kiribati’s President Anote Tong races to find a way to protect his nation’s people and maintain their dignity, many Kiribati are already seeking safe harbour overseas. Set against the backdrop of international climate and human rights negotiations, Anote’s struggle to save his nation is intertwined with the extraordinary fate of Tiemeri, a young mother of six, who fights to move her family to New Zealand. At stake is the survival of Tiemeri’s family, the Kiribati people, and 4,000 years of Kiribati culture. Anote’s Ark screens at the Hot Docs Cinema at 10:15. It’s 2nd screening is tomorrrow and it’s last on Friday.


OMNI: An Act Against Gravity had its World Premiere last night. Directed by Bogdan Stoica, it’s a quirky delight. The 80-minute doc looks at the efforts of a young Montreal engineer and inventor, Alexandru Duru, to create a fully operational hoverboard. The expression “nothing is easy” comes to mind and this film proves that. It also proves that patience and perseverance pay off. Following today’s screening of OMNI: An Act Against Gravity at 12:15 at the TIFF Bell Lightbox 4, there’s a 6-minute Canadian short, Tibor from Petra O’Toole OMNI: An Act Against Gravity has it’s final screening on May 4th.
The Oslo Diaries is directed by Mor Loushy and Daniel Sivan. It’s an Israel-Canada coproduction and was shot in English, Hebrew and Arabic. It is set 26 years ago when, just as it seems today, the idea of peace in the Middle East was just a distant dream. The year is 1992 and
Israeli-Palestinian relations are at all time low. In an attempt to stop the bloodshed, a small group of Israelis & Palestinians meet in Oslo – secretly and against the law. The meetings that changed the Middle East forever were never officially sanctioned and were chronicled only by the negotiators’ diaries. The Oslo Diaries has its 2nd and last screening today 12:30 at the Elizabeth Bader Theatre on the University of Toronto Campus.

The all-Canadian shorts program, Below The Surface, contains four shorts that look a little deeper than normal into the lives lived in unique ways. One of the more intriguing titles is Jackie Torrens’ 17-minute film Bernie Langille Wants to Know Who Killed Bernie Langille, There’s a 21-minute short titled Carousel, another, the longest at 23 minutes, titled The Head & The Hand, and the last is Turning Tables, which runs 16 minutes. All together it’s a 77 minute program and as we have said before, the nice thing about shorts is if you’re watching something you don’t like, wait a few minutes because something else will be right along. This program runs today at 3:00pm at the Scotiabank 7.


There are two Canadian films at 3:30. This Mountain Life is set in British Columbia, a province that is 75% mountains. Anyone familiar with the various ranges that are grouped under the name The Rockies has wondered about how the earliest explorers or Indigenous peoples made their way through this impossibly beautiful and impossibly passable terrain. This Mountain Life centres on a daughter and her 60-year-old mother as they make what you would immediately think is an impossible trek of some 2300 kilometres north into Alaska. This Mountain Life runs 77-minutes and is on at the Elizabeth Bader Theatre on the University of Toronto Campus.

Also at 3:30 is another of the John Walker documentaries in the special Focus feature that honours this Canadian documentarian’s work. Titled A Drummer’s Dream, this multi-award-winning film profiles some of the greatest drummers in the world including Nasyr Abdul Al-Khabyyr, Dennis Chambers, Kenwood Dennard, Horacio “El-Negro” Hernadez, Giovanni Hidalgo, Mike Mangini and Raul Rekow, A rare and unique assembly of explosive talent, passion, humour and irresistible personality come together in a magical setting. Produced by John Walker Productions Ltd. in co-production with The National Film Board of Canada, writing in MacLeans Magazine, Brian Johnson wrote ”This film is not to be missed.” This is the film’s only screening at Hot Docs and it’s at the Scotiabank 4.


One of the films within The Canadian Spectrum is the truly frightening documentary titled The Guardians. Set in the US city of Las Vegas, Toronto filmmaker Billie Mintz delves into the legalized seizure of property, money, bank accounts, wills, in fact the very lives of older people who are hospitalized against their wishes or need in a scheme that is in every way a scam. As one participant in the film states, “If you’re going to retire, do not move to Las Vegas.” At 104 minutes it’s a long film but compelling filmmaking and well worth the time. The Guardians has its World Premiere at 6:00PM at the Elizabeth Bader Theatre.
If you grew up at a certain point in Canadian rock ’n’ roll history one of the names you would have heard almost constantly was Randy Bachman. In 1974, Bachman Turner Overdrive was one of the biggest bands in the world with classics like Takin’ Care of Business and You Ain’t Seen Nothing Yet. This is the story of its founder Randy Bachman, from his early days with The Guess Who and hits like American Woman to today. As one of the few legendary artists to reach #1 in two separate bands, Bachman’s singularly focused goal of music has taken him from spectacular highs to crushing lows and back again, where today he reigns as one of the most prolific and legendary artists in the history of Canadian music. Simply titled Bachman, the 80-minute doc from director John Barnard features interviews with msny of Bachman’s friends, family and fans including Neil Young, Alex Lifeson (Rush), Peter Frampton, Buffy Saint-Marie, Paul Shaffer and Chris Jericho. Bachman has its World Premiere tonight at 9:30 at the TIFF Bell Lightbox.

The NFB at Sundance