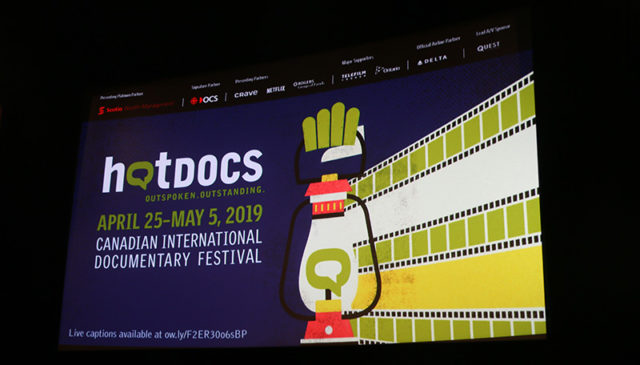 (April 25, 2019 – Toronto, ON) For the past few years we’ve done our best to highlight the Canadian films playing each day at Hot Docs. A festival-goer suggested it might be more useful if they had some advance notice. This year we’ve decided our coverage of Hot Docs will include letting our readers know what Canadian films are playing the next day. So, yes, today is Day One of Hot Docs and we have given a lot of coverage to the opening film, nipawistamasowin: We Will Stand Up, so today we’re going to look at Canadian films screening tomorrow, April 26.

There are 6 Canadian films at Hot Docs tomorrow and they come from various programs at the festival, not just the Canadian Spectrum. First up at 11:45am is Long Time Comin’. It’s part of the Redux program which revisits past films that deserve another screening. Directed by writer Dionne Brand, it’s an NFB production originally released in 1993 that focuses on two Black lesbian Canadian artists, singer-songwriter Faith Norlan and multimedia artist Grace Channer. Channer was 34 when this film was made and is known for her large and sensuous canvasses. Faith Nolan is social activist, folk and jazz singer-songwriter of mixed African, Mi’kmaq, and Irish heritage. She grew up in Africville, a predominantly black community in Halifax but has lived in Toronto for many years. Long Time Comin’ captures their work, their urgency, and their friendship in intimate conversations with both artists. It only has one screening, tomorrow morning, April 26 at 11:45 at the TIFF Bell Lightbox. It screens along with the short Older, Stronger, Wiser from director Claire Pinto.

The next Canadian film on Friday’s schedule is also at the TIFF Bell Lightbox (TBLB). It’s titled Havana. From On High. Anyone who has been to Havana in the last few decades knows so much of the old city is in disrepair or outright decay. Yet atop these once proud and beautiful buildings there is a secret village of squatters. Makeshift 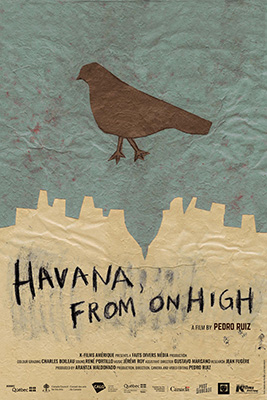 homes, populated by people who just can’t find proper housing in the always bustling city that has long suffered from a housing shortage. Directed by Pedro Ruiz, he turns his camera on these survivors of upheaval who are getting by and some might say thriving during this latest period of change in Cuba. The film is beautiful, poetic and mesmerizing.
Havana, From on High screens:
Fri. Apr. 26 at 2:45 p.m. at TBLB
Sat. Apr. 27 at 10:15 a.m. at TBLB
Fri. May 3 at 10:00 a.m. at TBLB

The 3rd Canadian film, River Silence is also at the TIFF Lightboox. In theme and look it seems to be an extension of the multi-award-winning film Anthropocene, but instead of ranging far and wide, River Silence trains its cameras on a small village and a group of people, many Indigenous Brazilians, displaced by the building of a dam on a tributary of the Amazon. The cinematography is wonderful—the drone shots providing a special perspective—and the editing allows the story to flow as easily as the river these people once knew must have. This may be an environmental story but it is highly personal, the story of four people and their families and how each is impacted by change and how they have become powerless pawns in a game far larger than any of them can imagine. Pay attention to the closing sequence of supers that spell out the scope of the tragedy that is taking place along the Amazon.
River Silence screens:
Fri. Apr. 26 at 5:15 p.m. at TBLB
Sun. Apr. 28 at 12:00 p.m. at TBLB
Fri. May 3 at 9:30 p.m. at TBLB

Violence against religions has been going on since the formation of religions. In its simplest terms it’s an Us vs Them thing and everyone believes that they have, as Bob Dylan once sang, God On Their Side. Just a few days ago it was in Sri Lanka, a few weeks ago it was New Zealand, our not-so-nice neighbour to the south just experienced three church burnings in buildings that served local Black communities. In case you have forgotten, it was just a little over two years ago that a similar event rocked Canada when a lone gunman entered a mosque in Quebec City and killed six people and left another 19 injured. This act fuelled by racism and Islamophobia is the backdrop for the film Your Last Walk in the Mosque. Shot in French, Arabic and English, this 50-minute documentary was co-directed by Ubaydah Abu-Usayd and Abderrahmane Hedjoudje and is set just a few months after the event when the survivors of the terrorist attack and the victims’ families recount the last time they saw those six people who were murdered and the effect their loss has had on their lives.
Your Last Walk in the Mosque has only two screenings:
Fri, Apr. 26 at 8:00 p.m. at the Innis Town Hall
Sat, Apr. 27 at 3:45 p.m. at Scotiabank Theatre

A World Premiere screening of Killing Patient Zero from director Laurie Lynd is next. It is based on the book Patient Zero and the Making of the AIDS Epidemic by Richard McKay, a professor at the University of Cambridge. Part of the Special Presentations program at Hot Docs, Killing Patient Zero reveals the homophobia behind the headlines and traces the devastating impact of the 1980s AIDS epidemic. It also clears the name of the Québécois flight attendant who was infamously known as “patient zero.”
Killing Patient Zero screens:
Fri. Apr. 26 at 8:30 p.m. at TBLB
Sat. Apr. 27 at 12:30 at Scotiabank Theatre
Fri. May 3 at 2:45 p.m. at Hart House

Matt Gallagher’s new film, Prey, is also a World Premiere and carries a warning from Hot Docs: “Content notice: Film contains sexual violence trigger material.” Prey is about the indefensible sexual abuse within the Catholic Church. Gallagher’s film tracks the case of a certain Father Hod Marshall, who pled guilty to 17 assault charges. One of his victims, seeking closure for what happened during his childhood, filed suit against the Basilian Fathers of Toronto. The film centres on a man known by some as “the priest hunter,” lawyer Rob Talach and on a number of survivors who provided testimony.
Prey screens:
Fri. Apr. 26 at 9:00 p.m. at TFLB
Sat. Apr. 27 at 1:00 p.m. at the Hot Docs Ted Rogers Cinema
Thu. May 2 at 1:30 p.m. at TBLB

In all there 36 films screening tomorrow, including these six Canadian documentaries. Find more information and tickets online at Hot Docs.