It has been said that although they rejected the monarchy, or perhaps because they did, Americans love anything royal or even pretending to be royal. Just one example is the Kennedy administration, which was often referred to in terms of King Arthur’s magical Camelot. Other examples of America’s enchantment with all things royal can be found in Hollywood where generations of actors are often looked upon as legitimate dynasties with long family lines and deep histories. The Barrymores are just one example, with Drew Barrymore being the reigning head of a family that included the legendary John Barrymore and his brother Lionel and sister Ethel. Lesser dynasties include the families headed by Kirk Douglas or Lloyd Bridges or the late Henry Fonda, whose granddaughter Bridget carries on the family tradition handed down to her by Henry’s son, the actor Peter Fonda.

The story begins in Ireland in 1840, five years before the potato famine was to mysteriously appear in the Emerald Isle. Alexander Hughston and his wife Margaret decide to leave Tobermore and emigrate to Canada, settling on a small parcel of land near Orangeville, Ontario, where they changed the spelling of the family name. Various publications have written that it was originally spelled Houghston, but we believe that information to be incorrect. Eight years later their son Robert Moore Huston was born on the family farm. He grew up and eventually married Elizabeth McGibbon. They remained on the farm and had four 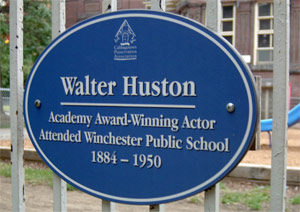 children. They are, in order of their arrival, Anne, who was born in 1873, Alexander in 1875 and Margaret in 1877. It must have been rough-going trying to feed three children and eke out a living on land that seems to grow stones as readily as any other crop. Whatever the reason, Robert gave up farming and moved his family to Toronto where he was able to get work as a building contractor. The last of their four children, Walter, was born in Toronto in 1884. One of the houses he lived in still stands on Wellesley Street near Parliament in the Cabbagetown neighbourhood of downtown Toronto.

As he was growing up, Huston thought he would follow in his father’s footsteps and to this end be became interested in engineering, but there was some talent in the family for the stage and it first came to the fore in his sister, Margaret. She had shown a gift for singing and began to sing when she was still very young. In her teen years she appeared in a number of amateur performances in Toronto and when she was 19 years old performed for the West 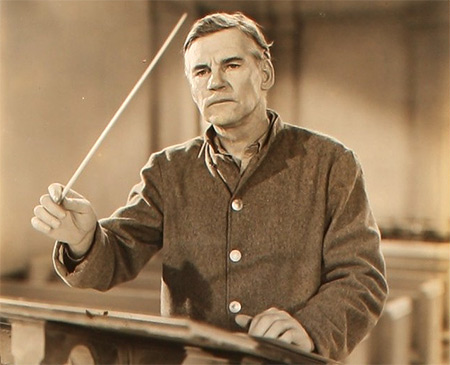 End YMCA Ladies Auxiliary. After three years of vocal study in Europe, she returned with a homecoming concert at Toronto’s Massey Hall that was a huge success. Margaret was widely known for her work as a recitalist and went on to have successful debuts in London, England and New York. Then, after a career that had lasted only 12 years, she decided to marry and give up her life on the stage.

Meanwhile, Walter Huston was working as an engineer in electric light and hydro installations in Texas, Montana, and Missouri, a career that lasted from 1905 to 1909. He met, then married, Rhea Gore. Their son, the future award-winning writer/director/actor, John Huston, was born in Missouri in 1906. It was around this time that Huston’s own love for performing emerged. In what can only be described as a radical career change, in 1909 the engineer joined a vaudeville troupe.

He eventually developed a song-and-dance act when he met Bayonne Whipple. The two were attracted to each other, and Huston divorced Rhea in 1913. His second marriage didn’t last either. Huston was married for a third time, in 1931, to the actress Nanette Eugenia Sunderland, usually called Nan. By then his career had advanced by leaps and bounds. From his first days on the vaudeville stage he had made his way to New York and his Broadway debut came in 1924 in Mr. Pitt.

Later the same year he also appeared in Desire under the Elms. He continued to build his reputation on the stage, but movies were taking an ever-growing share of the public’s money and attention. With the advent of sound, actors who could deliver their lines were in high demand, and Huston was no exception. In an oft-quoted quip later in his career, he once said, “I’m paid to make bad lines sound good.”

His film debut came in the 1929 short Carnival Man. He then made Gentlemen of the Press and The Virginian. He quickly established himself as a major actor when he was given the title role in 1930`s Abraham Lincoln.

He had not completely left the stage, however, and while he piled up screen credit after screen credit in the early 1930s, he returned to Broadway in 1934 to play the lead in Dodsworth and would also star in the film version two 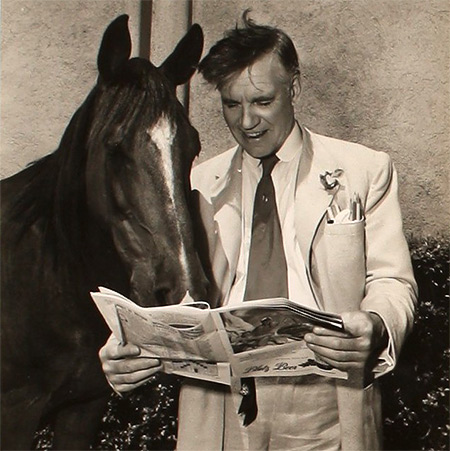 years later. He was named Best Actor for that role by the New York Film Critics and was nominated for the Best Actor Oscar® for that same film. He had come quite a ways from his dramatic classes in those early years of his life at Toronto’s College of Music.

As his career blossomed, other plum roles and nominations and awards would follow. He was again nominated for an Oscar® for his role in The Devil and Daniel Webster in 1941. He also worked with his son in 1941 when he was cast in the role of Captain Jacoby in the now classic, Maltese Falcon. One year later he appeared in the film musical, Yankee Doodle Dandy playing father to James Cagney, who was playing the role of American composer George M. Cohan. The Academy Awards® nominated Huston for Best Actor in a Supporting Role.

In what is widely thought to be his most memorable role, Huston finally won a Best Supporting Actor Oscar® for his part in the 1948 film Treasure of the Sierra Madre. In what must have been an especially sweet moment for both of them, his son John Huston won his first Oscar® as Best Director for the same film.

No one knew it at the time, but Walter Huston would only live long enough to complete two more films, The Great Sinner, released in 1949, and The Furies in 1950. He died of an aneurysm in Beverly Hills, California, one day after celebrating his 66th birthday.

The dynasty survived, however. That’s what dynasties are supposed to do. John Huston went on to become one of the great American directors. Interestingly, in terms of his family history, he decided to live in Ireland for many years and two of his children, Angelica Huston, and her brother the screenwriter and actor Tony Huston, spent a great deal of their childhood years growing up there, although both had been born in California. Their half-brother is the actor and director, Danny Huston, who was born in Italy.

All of the images on this page were scanned from originals in the Northernstars Collection. This biography is Copyright © 2015 by Ralph Lucas and may not be reproduced without written permission. Click here for more information about copyright.