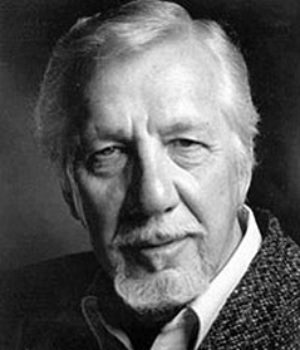 William Ian deWitt Hutt’s hold on Canadian theatre was as imposing as his name. Born in Toronto, Ontario on May 2, 1920, he began acting in school. From his first days at the Hart House Theatre, he went on to become a distinguished leading man in Canada, England and the United States.

But the time between his days at school and his professional acting debut were delayed. First by his service in the Second World War, and then a desire to complete his studies at Trinity College in Toronto. He was 33 when he first stepped on the stage in what was also the Stratford Festival’s first year. Oddly, his first major role at Stratford would be the one he would perform again when he announced his retirement in 2005.

Make no mistake. Hutt did not go straight from college to the Stratford Festival. He began, like many aspiring actors, in summer stock in 1948. Almost immediately after that he joined Ottawa’s Canadian Repertory Theatre. It was 1953 when he joined the Stratford Festival for its inaugural season and he had been a virtual fixture at Stratford for the rest of his life. His played all of Shakespeare`s great characters including Lear, Hamlet, Macbeth, Falstaff, Titus Andronicus and Prospero.

After spending several years touring North America with the Canadian Players, Hutt opened on Broadway in 1964 in Tiny Alice by Edward Albee. His role of the lawyer in that play remains the standard by which all other actors are measured.

He is perhaps best known and remembered thanks to television. In addition to a few Shakespearean efforts like Henry V in 1966 and Much Ado about Nothing in 1987, his role as Canada’s first Prime Minister, Sir John A. Macdonald in the miniseries The National Dream in 1974 brought his work to a broad-based national audience. In 1998 he returned to the small screen for Emily of New Moon. For his role as Macdonald, Hutt was given both an ACTRA Award and a Canadian Film Award in 1975. Six years earlier, in 1969, in recognition of his contribution to Canadian theatre William Hutt had been made a Companion of the Order of Canada. More than 30 years after that he was still on stage.

In April of 2005, Hutt announced that his official retirement would take place later in the year. He had previously considered it when he was 80, but now as his 85th birthday approached, it was something to think about just a little more seriously. His last performance at Stratford came on October 28, 2005 when he appeared for the fourth time on stage at Stratford as Prospero in The Tempest.

William Hutt died of leukemia in hospital in Stratford, Ontario.

This biography is Copyright © 2007 by Ralph Lucas and may not be reproduced without written permission. For more information about copyright, click here.