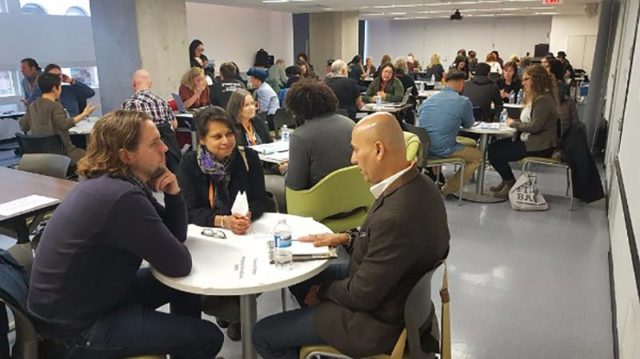 (October 13, 2017) When the 18th Annual imagineNATIVE Film + Media Arts Festival kicks off next week in Toronto, one of its most important programs will be their free While the festival itself opens on October 18, the Industry Series runs from October 19 to 21. The Industry Series brings leading professionals from around the world to teach and discuss topics relevant to Indigenous media creators. This year’s event has added weight because it will also launch with the announcement of an ongoing development program, the imagineNATIVE Institute.

The imagineNATIVE Institute will be a year-round home for Indigenous professional development in media arts at The Commons, which is newly renovated space in one of Toronto’s more famous historic buildings, 401 Richmond, which is an arts and cultural hub on Richmond at Spadina.

The Industry Series panel topics will include Indigenous protocols, narratives and cosmologies in film and media, with panels such as Insiders and Outsiders: Developing New Collaboration Models, Protocols in Process and Practice, Breaking the Mould: Developing Indigenous Narrative Models, 2167: Indigenous

Special events as part of the Industry Series include: VICE Connects, where VICE content leads and associate producers will be engaging with imagineNATIVE delegates on their content vision and how to make formal submissions succeed; and Sound Design Masterclass with Māori artist Dave Whitehead, with credits on major motion pictures and shows including District 9, The Hobbit, Arrival and Netflix’s Okja.

September 24, 1985
All Birthdays in September

Phantom Carriage with Live Music at VanCity for Halloween