Home Article In Search of the Lost Father 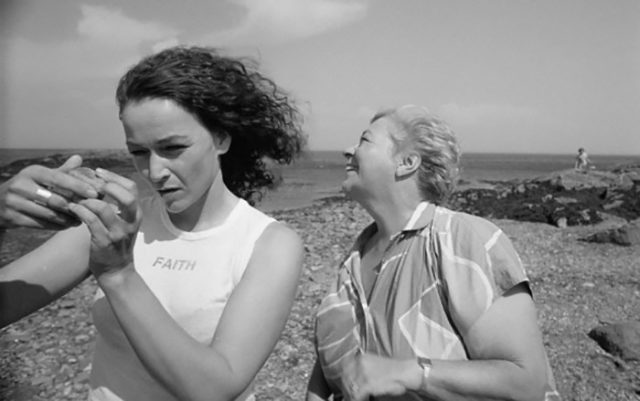 In Search of the Lost Father
by Isa Tousignant

(Take One Archives – Fall, 2000) Les Fantômes des Trois Madeleine, young Quebec director Guylaine Dionne’s debut feature, is one of those films that subtly, seductively seeps into consciousness. Much like the waves of the Gaspé sea that serve as the film’s backdrop, Les Fantômes swirls and twirls elegantly and dramatically around its subject matter of roots, freedom and love. Its sensuous black-and white close ups of sun-kissed female faces warm the heart through their intimacy, perfectly reflecting the haunting soundtrack of multi-layered whispering bird song and wind. The film’s fluid voyage through time and space flows effortlessly, with lyrical, surreal nonchalance, from past to present, city to seashore, interior to exterior. This could be termed a road movie, or a chick flick, were it not for its oneiric, enigmatic artistry; what it is, indisputably, is poetry onscreen.

Guylaine Dionne, much like her film, is charismatically indecipherable. I sat down with her one Saturday morning, in a techno cafe on Montreal’s Main-on Saint Mary Magdalene’s Day, ironically enough-after the most hectic of weeks. Instead of the intense­ly supercharged work experience I was expecting, I was invit­ed to relax, sit back, let the weekend take hold and just /Jc. We ordered food and chilled coffees and watched life pass by through the cafc’s open facade-the passersby seemed framed like on a TV screen, we remarked. What started as a recorded interview quickly morphed into a free-flow 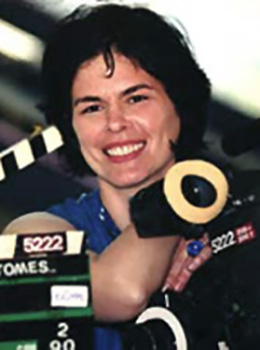 conversation as I realized that all that would be audible on the tape was the backbeat overlaid with clinking porcelain. So we talked about camping vacations, her son, friends in common (Montreal: incest city) and-oh yes-filmmaking. Sort of. An hour later, I came away happy and entertained, but with only the most impressionistic idea of how the wheels in Dionne’s creative mind tum. Our conversation had done little to untangle Les Fantômes’ enigmatic web, but it also made me realize that this, in itself, wasn’t the point.

Les Fantômes des Trois Madeleine follows three intergenerational Québccoises, all named Madeleine, on a journey to the vast seashore land of the Gaspé, in northeastern Québec, and into themselves. They are a peculiar trio of characters, not quite a clan, not quite a family either, but brought together by the shared desire to slowly peel away and recreate the layers of their fragmented memories. The narrative revolves around adoption: Mado, (France Arbour) about 60, is Marie-Madeleine’s (Sylvie Drapeau) long-lost birth mother; Madeleine (Isadore Galwey) is Marie-Madeleine’s twelve-year-old fatherless daughter.

Contrary to the interpretation offered by most critics, Dionne’s use of the name Madeleine had less to do with biblical history than with a tradition existing in Québec up to the 1960s by which women forced to abandon an infant named the child after themselves as a sort of remembrance. The Madeleines’ summertime, open-road, white convertible pilgrimage serves as a much-craved revisiting of a barely known past; primarily for Marie-Madeleine (Marie, the narrator of the film), who desperately needs Mado to supply her with an explanation for her existence, but also for the little Madeleine, who, though showered with love since her birth, craves more completely binding ties nearly as much as her mother. Through Marie-Madeleine’s eyes we visit a newly discovered heritage, we witness her conception and the passionate love story behind it, we see Mado in her youth, we are transported in time and place, as is Marie, by Mado’s illustrated stories of scratchy bebop and vintage cars. For both of them this trip is empowering: for Mado it is the discovery of responsibility, repercussion and a chance to return to a time of passion; for Marie it is the opening of a door onto a world of self-under­standing, emotional awakening and freedom of choice-the choice lo love and to trust. For all three, it is a rite of passage.

Not given to excessive self-analysis, Dionne is a tireless watcher and listener. She studied political science before entering Concordia University’s film production program in 1987, and after graduation (with honours) moved quickly towards docu­mentary making. She credits her broad cultural and geograph­ic knowledge for this (on top of the fact that she can speak four languages fluently) rather than any particular penchant, since the film she shot in her final year of college was in short fiction: a film titled Les Frissons d’Agathe, which won both a Panavision Canada Award and an award from Le Festival des Première Oeuvre de la ville Sainte-Therese for Best Fiction Film. Dionne entered the NFB in 1989 as a camera operator, where for two years she honed her skills, refined her style and her aesthetic as well as her capacity to adapt to the most unexpected situations. It was the perfect preparation for her subsequent work as director and producer on independent projects.

In 1991, she took on the challenging roles of researcher, location scout and production supervisor for the CBC television series Amerique 500. For the following three years, as she travelled throughout both American continents, she discovered she was just as comfortable meeting the Yanomami tribe in the Amazonian jungle of Venezuela as she was interviewing music greats Milton Nascimento and Gilberto Gil in Brazil, or Luis Bunuel’s legendary cinematographer Gabriel Figueroa in Mexico City. In 1994, while still in Mexico, she wrote and directed the documentary Les Rèves secrets des Tarahumaras, which was nomi­nated for Best Documentary Series at the Gémeaux Awards.

Her encounter with so many different cultures and the women who are part of them, says Dionne, is what inspired her to look deeper into her own foremothers’ history. As she worked on the Les Fantômes screenplay, Dionne’s knowledge of Quebec history was enhanced by her direction of three documentaries: two episodes for the series Iles d’lnspiration (1999)–one dedicated to legendary Québec poet and singer/ songwriter Felix Leclerc, the other to historian and author Louis Caron–and, more recently, an episode of the new series Les Histoires oubliées entitled “La Mémoire des lieux,” to be broadcast on Radio-Canada and ROI. Interestingly, in the last year Dionne has also directed an hour-­long documentary road movie entitled Jess Goes West for the WTN series Through Her Eyes, about a young Québecoise on a trip through Western Canada.

Dionne’s decision to make Les Fantômes was sparked by her interest in how the lives of Quebec women are shaped by soci­ety’s expectations. She was inspired more specifically by some astounding figures she unearthed concerning adoption: between 1949 and 1956, 20,876 illegitimate children were born in Québec, two-thirds of whom were put up for adoption ­that’s about 2,500 children a year.* In the ultra-Catholic envi­ronment of Québec during the Duplessis years, there was vir­tually no question of a respectable girl bearing and keeping a child out of wedlock. The unavailabilitv of birth control and the religious zeal that forbade it in any form was evidently a large part of problem (so the double standard always goes), and hordes of children were conceived on the spur of the moment, the fruit of brief sexual escapades or one-night stands.

The construction of Les Fantômes des Trois Madeleine was “like a puzzle,” says Dionne. “I started with this idea of adoption and then kept adding and adding to it, for six years.” So the theme of belonging and self-discovery was the starting point of this labour of love, but the development of her characters and the unfolding of the narrative required many research trips and much introspection. Dionne returned again and again to the Gaspé, repeatedly tracing the path her characters would take. She chose the site not only for personal reasons, but also because of its dramatic power: filmed in black and white, it is an environment that forcefully opposes “nature’s harsh con­trasts to the soft whiteness of the breathtaking seashore skies.” The compassion and extraordinarily delicate insight of the film pushed me to ask Dionne if she herself or someone close to her had been adopted. Her treatment of the subject seemed too emotionally precise to be that of an outsider, but as I learned during our conversation, it was simply an example of great human empathy and imagination. “We all know one,” she said of adopted people, but she didn’t go into detail. The adept sociologist’s touch.


Typical of life’s always amazing circular waltz, just days before I saw the film for the first time I received news from the “one” I know, a close friend who had just finally, after 10 years of searching, learned about her biological father. What she had discovered through her newly found grandfather was that her father was, in fact, dead, murdered in the early 1980s. In com­plete contrast with her adoptive family, this unknown father had more than a rebel’s streak in him: not long before he met her biological mother for their single-night encounter, he had gotten into a car accident and, though not under the influence, had killed three people. This tragedy apparently transformed him gradually over the years from a straight-A student to a peace) and ended up murdered at 27. The police department sent my friend her father’s unclaimed personal belongings and his mug shot; she discovered that she has his eyes.


However sad, tragic and unbearably romantically astonishing this story is to my friend and those close lo her, what I was most struck by is the transformation I witnessed in her as the result of being finally able to explain her existence in its entirety and close the page on her past. An aura of peace has descended upon her, forever dispelling that slight tinge of insecurity I’d never known her to be without. The awe with which she told her story-the wideness of her eyes, the

exalted nature of her speech-and the knowledge that somewhere, sometime, some­one existed who looked like her and with whom she would have truly belonged has given her life new meaning.


And this is the energy Dionne has knowingly and artfully suc­ceeded in tapping into. Marie’s moody, moved and emotional meanderings throughout the voyage end with an almighty and genuine release. Mado, never quite a,; troubled by the event, never the rootless one, enjoys the reunion’s high emotion; and the little Madeleine, released al the end by her mother for a sum­mer vacation with her soon-lo-be-met German father, emerges with a fuller life ahead of her. Redemption, enlightenment or just plain climax-whatever you call it-is achieved and relished.


Dionne has ignored the medium’s pesky conventions and indulged in a stream-of-consciousness, bi-tonal filmic mus­ing on things of universal concern. Not preaching, not expos­ing, just saying, showing. letting her characters be. Like Mado, Marie and Madeleine we draw strength from the freedom of the salty seaside winds, chirping birds and imaged reminisc­ing, leaving the experience with a sense of closure, a new-found taste for adventure and emotional daring. The Madeleines forge a world of their own where legends and memories hold the key to the future, and for a few moments, in this ode to the beauty of the unsaid, we are offered the priv­ilege of joining them. Dionne has given us the gift of roots.

This article by Isa Tousignant originally appeared in Issue 29, Fall 2000, of Take One magazine. Northernstars.ca acquired the digital archives of Take One in 2007.