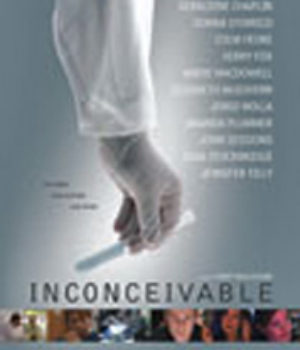 If you missed Inconceivable when it was first released, you might be able to catch it on DVD, or on one of the many movie channels. When it was first announced I asked myself why the producers were begging for trouble. I could see the headlines before the movie opened: “Inconceivable a Still-Born effort” or, “Inconceivable Lives Up to its Name.” I didn’t read the reviews when it came out because I try my best to avoid all outside influences when it comes to movies I may end up reviewing myself. As it turns out I missed the theatrical run and so when the DVD landed on my desk last week I was able to approach it with no preconceived ideas of what was about to unfold.

In case you missed it, Colm Feore plays a doctor who runs a sleek, modern fertility clinic in Las Vegas, Nevada. The location is so distant from the story I got the feeling a 2nd film unit shot some exteriors of the infamous sin city that were cut into the film when the plot needed a chapter marker. Feore plays a terrific role with a mildly predictable character arc but fans of the actor shouldn’t miss this performance. His character, Dr. Jackson Charles Freeman is god-like – notice the initials of his two first names. He helps women who have had trouble conceiving to become pregnant through artificial insemination. Thanks to ambitious editing we quickly meet a cluster of nine women scheduled for the guiding hands of the good doctor. A few days after the clinical process we learn that eight of them are pregnant thanks to the procedure. Each mom-to-be ultimately carries to term and that’s when the story in this film sets in. While we have been witness to the frenetic pace of the clinic, thanks to exquisite if occasionally monotonous tight editing, what we haven’t seen is the slight of hand that caused this miracle to happen. As the happy moms exchange photos of their babies, it is eerily evident that the 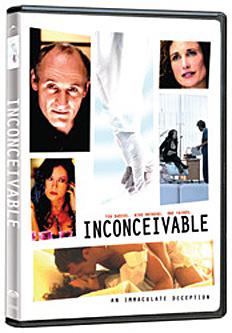 babies bear a striking resemblance to each other. Since they all had different mothers, chances are they all had the same father and that wasn’t supposed to happen.

The editing and ramping does become mildly annoying. Ramping is a technique in the edit process where things can be sped up and/or slowed down within a single shot. There is lots of ramping in this film, and as mentioned the editing is so tight in places the soundtrack often overlaps itself. This intended effect helps to make up for other sequences where an investigator looking into the multiple births asks each woman the same question in the same way with the same emphasis on the same words with the same pauses in the same places. But it works.

Ultimately, the modernity of the clinic, the concept of easy conception, the sleek look, the distant exteriors and blurred taillights of Las Vegas convey the artificiality of the whole thing. The whole thing being about artificial insemination. In addition to Feore, there are excellent performances from the rest of the large cast. Of particular note, Jennifer Tilly seems to have a firm grasp on the role of modern day vamp and turns in a textbook performance in this film. Andie McDowell is easy to look at and Elizabeth McGovern, who plays the journalist who kicks off the investigation into the clinic’s practices, plays a strong, determined woman uneasy with what has happened yet pleased to finally be a mom. Small snippets from Donna D’Errico, Geraldine Chaplin, Kerry Fox, Amanda Plummer and Colin Mochrie, Nicholas Campbell and many more.

My only disappointment with the DVD is that given its high degree of in-your-face editing, ramping, sound track layering, and other filmmaking tricks, there are no extras on the disk. Editors and film buffs would have enjoyed knowing the whys and hows of the techniques used in this movie. And, as this is the third feature film in an amorality trilogy, I had hoped there would be an interview with Irish writer-director, Mary McGuckian, but there was none.

Ralph Lucas is the founder and publisher of Northernstars.ca. He began reviewing movies while in radio in Montreal in the mid-1970s. Inconceivable is an Alliance Films release. All images copyright © Alliance Films, used with permission.