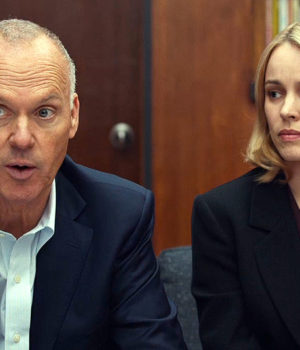 (December 11, 2015 – Los Angeles, California) – What qualifies a film for Indie status is hard to say. The whole thing about being “indie” is that there are no rules. It also varies by country. If there is one defining characteristic in the United States that makes an indie production truly independent then it needs to be produced outside the six major Hollywood studios. Depending on who you talk to indie films can be harder to make, because you don’t have a major studio behind the production, or they can be easier to make for exactly the same reason. And just because they’re “indie” doesn’t mean they can’t attract top talent and respectable budgets. That’s Michael Keaton and Rachel McAdams in a publicity still for the Entertainment One release Spotlight.

The US-based Independent Film & Television Alliance, which has membership in 23 countries, took a look at the recently announced Golden Globe nominations and discovered indie films are

doing very well. In fact, they continue to thrive, with nominations earned across 11 categories from 21 different films.

Following is the full list of the independent films nominated for the 73rd Annual Golden Globes:

The Independent Film & Television Alliance (IFTA) is the global trade association for the independent motion picture and television industry. Headquartered in Los Angeles, the organization represents more than 150 member companies from 23 countries, consisting of independent production and distribution companies, sales agents, television companies and financial institutions engaged in film finance. IFTA is dedicated to protecting and strengthening its Members’ ability to finance, produce, market and distribute independent films and television programs in an ever-changing and challenging global marketplace.