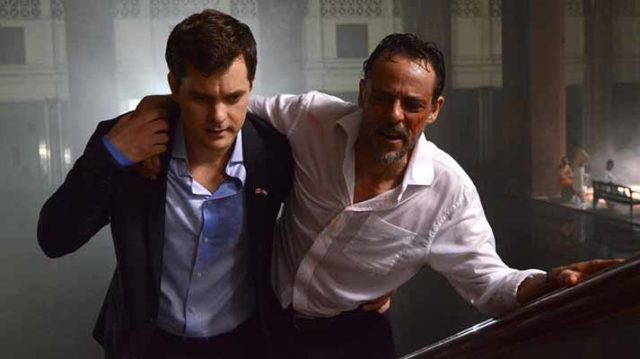 (September 21, 2012 – Toronto, Ontario) After the lighter-than-air love story that was the plot of Cairo Time, Montreal-born writer/director Ruba Nadda returns with a thriller-lite set in present-day Damascus. Or what was “present-day” Damascus when the film was shot in South Africa, just prior to the outbreak of the bloody revolt against the Assad family rule that has mutated into a very nasty sectarian civil war. Actually, Inescapable is more of a mystery than a thriller, although it does have its

Abid (Alexander Siddig), ex-security officer from Syria now successful businessman in Toronto, hears that his grown daughter has been kidnaped in Damascus. He immediately leaves his Canadian wife and heads back home, bent on a mission. He bribes his way into the country, falling back on all his old tricks, and meets a glamorous Arab woman, Fatima (Marisa Tomei doing a credible job), standing in the pouring rain. Within minutes it becomes obvious that she is his old flame, and boy is she pissed off he married a Canadian: “What’s the matter with you Arab men, marrying the first blond you fuck.” “She`s a brunette,” he replies.

It turns out our hero is wanted by the state police – why we don’t know – and his mission must be a secret or he’s a dead man. With the reluctant help of Fatima, he penetrates deep into the interior ministry to confront an old friend (Oded Fahr) who now wields considerable power. With bribery or threats to reveal his past, he tracks down various leads while avoiding talking about what drove him to leave his homeland in the first place and land in Toronto. It 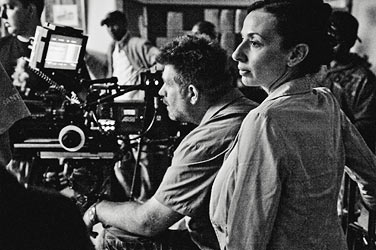 turns out that his daughter was curious as well, and her attempts to discover the family secret led to her abduction.

The critics have not been kind to Inescapable, and I think promoting it as a thriller is misleading. This is no Bourne, and our man is not a killing machine à la Liam Neeson in Taken. What Inescapable tries to be is a smart mystery mixed with some romance. The mystery is revealed about halfway through the film, and the romance between Siddig and Tomei never materializes. Tomei looks great, but there is no spark.

The last third is made up of some chases, gunplay and our hero getting one helluva beating. Ms. Nadda will never be mistaken for an action director, and she is not served well by her script with its foreshadowing and wasted scenes that go on too long. Perhaps the biggest complaint has to be that the sets in South Africa are inauthentic and the film desperately needs some exteriors of Damascus. I realize logistically that would haven been near impossible, and I’m sure South Africa offered lucrative tax incentives, but the film looses any sense of place. What made Cairo Time so special was in large part due to the Cairo locations and the glimmering Nile captured by ace cinematographer Luc Montpeller. In Inescapable, he works a lot inside rooms that are located Anyplace in the Arab world.

Also see: Watch a trailer and see the Cast & Crew of Inescapble.

Wyndham Wise is the former publisher and editor-in-chief of Take One: Film in Canada. Visit wyndhamsfilmguide.ca.