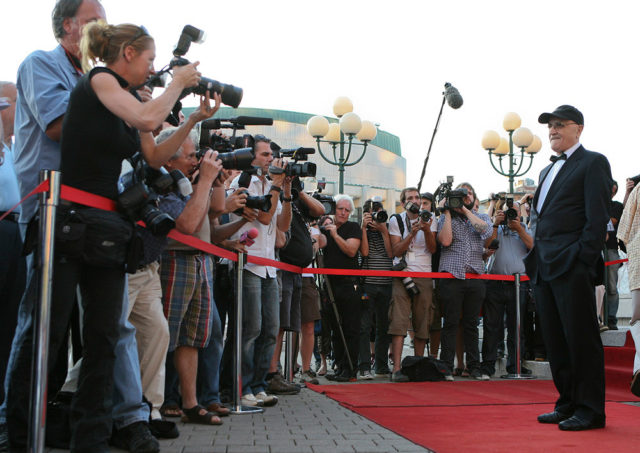 
(January 1, 2017 – Montréal, QC) Except for two major blowouts, 2016 was business as usual for Quebec’s film scene. There was no off the charts hit like Bon Cop Bad Cop, released in 2006, and the industry continues to fall behind the box office share (about 18%) it averaged ten years ago. The weekend of December 16, only one Quebec film was in the top ten: Votez Bougon, the big screen adaptation of Les Bougons, the rollicking, wildly popular TV show about beer-swilling, mange la merde welfare recipients that’s a cross between All in the Family and Shameless.

And of course Xavier Dolan was once again the number one focal point as he has been since 2010. You could divide the modern industry into two periods: BD (Before Dolan) and AD (After Dolan).

Dolan made his now ritual trip to Cannes with his latest, It’s Only the End of the World (Juste la fin du monde), and gave the middle finger to critics who dissed the picture. Then he won the festival’s Grand Prix, and when released at home, the film did well. It’s Only the End of the World, which has a shot at picking up a Best Foreign Film Oscar, is a seductive, inventive, and emotionally charged movie about a young man who visits his long estranged family to tell them he’s dying.


Dolan’s film didn’t sell as many tickets as Jean-François Pouliot’s Les 3 p’tits cochons 2, the sequel to the boys-behaving-badly comedy that earned almost $5 million eight years ago. Another high profile sequel, Nitro Rush, follows up on Nitro, a 2007 action picture I thought was slick, but incoherent. Both sequels feature actor Guillaume Lemay-Thivierge.

The ultimate follow-up, Bon Cop Bad Cop 2, now in the works, will be released this summer. The original film’s producer and co-writer Kevin Tierney messaged me, “I sold my interest and have nothing to do with the sequel.”

As for the dramas, 2016 was the first year that Quebec’s annual film awards did not honour filmmaker Claude Jutra, whose Mon Oncle Antoine was long considered the best Canadian film ever made. The industry, not to mention millions of Québécois, were horrified to discover from a biography by Yves Lever that Jutra was a sexual predator. Some industry veterans refused to believe that his desires took him beyond an attraction to young men into Pedophilia. Whether or not the event, and the prize itself, will continue to be called Gala du cinéma québécois remains to be seen.

Forcier was the only renowned moviemaker to screen at the 2016 WFF, which for years has been on a roller coaster of trials and tribulations. This year the situation was catastrophic. As a result of the ongoing funding breakdown, there weren’t enough theatres to screen hundreds of films or accommodations for guests. Nevertheless, President Serge Losique’s festival continued to have its supporters and fans, and it played strong films like Hector Babanco’s My Hindu Friend with Willem Dafoe. The actor spoke movingly about the director, who had just died. (Disclosure: I served on the WFF’s First Features jury.)

During a TIFF interview Robichaud told me that she intended her picture about an imaginary island country negotiating mineral contracts to have wide-ranging appeal. “I wanted people to relate to the issues wherever they were from. I needed to have this island that does not exist so I could construct the political issues any way I wanted to. It gave me a lot of liberty.”


As for Obomsawin’s painstakingly assembled courtroom drama about activists struggling for First Nations children in need of the kind of support granted to white kids, We Can’t Make the Same Mistake Twice is the latest in Obomsawin’s extraordinary catalogue of NFB produced films about Canadian aboriginal people.

“They make people invisible,” Obomsawin said at TIFF, referring to white power elites. “They think that these people have no brains, no life. It’s a mentality that they know best, and you are nothing. You don’t exist. We know all about you. Shut up. We will fix you.”

Two Lovers and a Bear set in the far north among aboriginal people, mixes fantasy and reality in a story about a passionate couple skiddoing into the frozen wild on an existential quest. Their “struggles through the cold and the ice, are almost like a vehicle to convey their inner torment,” said director Nguyen.

For me the brightest and the best of the 2016 vintage, Anne Émond’s Nelly, dives deep into the splintered, phantasmagorical world of the late Quebec writer Nelly Arcan (whose birth name was Isabelle Fortier). Highly regarded novelist and equally successful whore, Nelly comes to full sensual life in Émond’s movie which veers between brutal realism and gilded fantasy out of a 1950’s Marilyn Monroe musical.

“What I wanted to do,” Émond said at TIFF is make kind of a chaotic film where the viewer doesn’t know anymore what’s true, or what’s not true, and in a way that’s what killed her in the end.”

Meanwhile, American films by Quebec’s Denis Villeneuve and Jean-Marc Vallée played to strong reviews and audience response. As much I admire Villeneuve’s work, particularly Incendies and Prisoners, I was disappointed by his ambitious and cerebral sci-fi project, Arrival. (His next will be his more than highly anticipated sequel to Blade Runner.) Vallée’s 2016 release was Demolition, his nerve-jangling depiction of personal apocalypse.