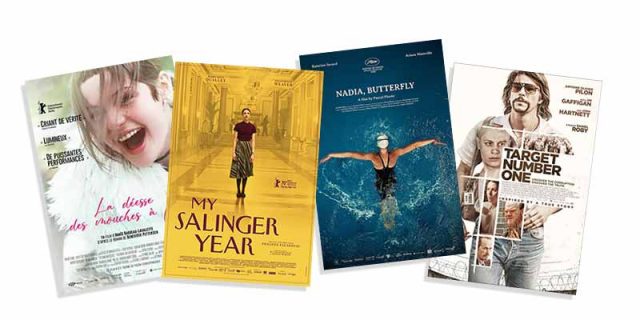 Inside Québec: 2020, Year of Corona
by Maurie Alioff

According to festival spokespeople, their mainly online events were a big success, or as RIDM tagged it, “record-breaking.” The doc fest, the most recent of the events, played out over three weeks from November 12 to December 2, screening films from around the world programmed into thematic sections. Participants zoomed into numerous events from the RIDM Forum, the umbrella for many types of activities, to podcasts. The fest’s normally large, Montreal-based audience, expanded to include viewers from outside the city (11-25% of section tickets). Clearly, the advantage of online programming is that viewers, not to mention professionals networking and workshopping, don’t need to show up in the usual venues.

Meanwhile, American shoots didn’t dry up. The disastrous spread of the virus in the US, not to mention financing opportunities, drew productions like Disney’s Home Alone re-make to Montreal. Of course, there were setbacks like a false positive, but the show went on in compliance with on set regulations. Other Hollywood titles included Roland Emmerich’s latest sci-fi extravaganza, Moonfall. The Québec government invested $10 million in the production, and Emmerich, who has often filmed in the city, announced he would bring his next three pictures to Montreal.

For some reason I can’t figure out, recent high profile Québécois projects have taken to featuring young women as protagonists. Sophie Deraspe’s Antigone, with its eponymous teenage rebel heroine, won multiple Prix Irises at the 2020 online version of the annual award ceremony. The Prizes included Best Film, Best Director, and Best Screenplay. After its 2019 world–premiere at the Toronto International Film Festival, critical acclaim, and various honours, the movie faltered at the Québec box office during its theatrical run. Now streaming on Bell Media’s Crave, who knows how many viewers have seen it?

Unlike Deraspe’s idealistic Antigone, the sixteen–year-old lead of Anaïs Barbeau-Lavalette’s La déesse des mouches à feu (Goddess of the Fireflies) is a nihilistic hedonist escaping the trauma of her permanently at war parents (Caroline Néron and Normand d’Amour). The movie, based on Geneviève Pettersen’s novel, never judges angel-faced Catherine (Kelly Depeault) as she whole-heartedly trips on mescaline, sucks on joints, and delights in her first sexual adventures.

A period piece set in the mid-nineties, Barbeau-Lavalette’s vividly shot and psychedelically dreamy, rock ‘n’ roll fuelled movie captures the world of Kurt Cobain-obsessed grunge kids. The parties, the goofing around in the woods, the escalating drug use. A writer joked, “If you throw a rock at the Canadian film industry, you’re bound to hit a coming-of-age drama set in the rural or suburban parts of the country.” In hers, Barbeau-Lavalette captures delicate variations of teenage lust and romance, in some scenes as explicitly as glimpses of a hand job.

Goddess of the Fireflies world-premiered at Berlin’s 2020 Film Festival, where, according to reports, it triggered a sensation. “I wanted to offer a frontal point-of-view on adolescence,” Barbeau-Lavalette (The Ring, Inch’ Allah) told a reporter. “I had never seen a film that looked at this transformation, this age, the way I had lived it — as the height of the mutation of a character, without judgment, and embracing the vertigo of that passage, along with the pain and beauty it brings.”

Following a successfully wide release, the picture got pulled from theatres when the second wave of Covid-19 hit hard.

Philippe Falardeau also premiered his latest in Berlin as the fest’s opener. His My Salinger Year went on to close the Festival du nouveau cinéma, where he appeared in an online master class, and streamed Canada-wide in October. Another FNC master class was offered by artists Michelle and Uri Kranot, animators whose VR production The Hangman at Home competed in the fest’s Explore section after winning the Grand Jury Prize for Best virtual reality Immersive Work at the 77th Venice Film Festival.

The Berlin launch of My Salinger Year was disfigured by a horrible event: a terrorist shooting that had to be addressed onstage. On top of that, early reviews of the picture were negative. This movie’s female coming-of-age story is completely different from Antigone’s or Catherine’s in Goddess of the Fireflies. Based on a memoir by Joanna Rakoff, My Salinger Year’s protagonist Joanna (Margaret Qualley) longs to plug into New York City’s 1990’s literary scene. She gets a job as an assistant to J.D. Salinger’s literary agent (Sigourney Weaver), work that mostly involves being a gatekeeper for the legendarily reclusive writer and keeping his obsessive fans at bay. Falardeau (the Oscar-nominated Monsieur Lazhar, The Good Lie) follows Joanna as she deals with people who never stopped tripping on The Catcher in the Rye. Throughout the picture, Salinger appears mainly as a voice on the phone or a shadow. Most of the dramatic tension comes from Joanna’s relationship with her old school, computer hating boss, romantic relationships, and her sympathy for the poor souls who long to connect with their idol.

Like his heroine, Falardeau had never read Catcher, or Franny and Zooey, or any of the others. “Salinger for me, was a really relevant writer that I hadn’t read,” he told The Montreal Gazette’s T’Cha Dunlevy.“I wrote my first draft without reading him. Then when I read him, I had an epiphany, as Joanna did.” Falardeau, who was 49 at the time, is aware that J.D Salinger’s voice has been a deeply soulful inspiration for young people, especially from earlier generations. “I didn’t expect to like it,” Falardeau continued, “but I liked it very much, probably more than I would have in my teens. It was a revelation.”

Pascal Plante’s 2017 film Les faux tatouages (Fake Tattoos) was a delicately restrained story about adolescent love and burgeoning sexuality. His character Mag (Rose-Marie Perreault) resembles Catherine from Goddess of the Fireflies. She’s garrulous and coquettish, but in no way risking self-destruction. In Plante’s latest, Nadia, Butterfly, yet another young female character is a teenage professional swimmer backflipping into a psychological and spiritual crisis. The story unfolds at the 2020 Tokyo Olympics, which of course didn’t actually happen, leading a joker to call Nadia a sci-fi movie. Plante shot the project in Japan and Montreal before the onset of Covid.

The pandemic also wiped out the movie’s Official Selection screening at Cannes 2020. Because TIFF needed to pare down its schedule to fifty movies, it passed on Nadia, Butterfly, but eventually placed it as number six on its annual top ten Canadian movies list. Released in September, the picture earned under $10,000 by mid-October and is not yet available online.

Played by two-time Olympic athlete Katerine Savard, Nadia alternates between moments of exaltation with her teammates and anxiety about her future. She talks about swimming being a “selfish” sport and wanting to become a doctor, but you get the impression something deeper is going on, and what it is ain’t exactly clear. Does it have anything to do with swimming for Tram Canada? At one point, she doesn’t feel like singing the national anthem. Is she alienated by the US anthem and shouts of USA, USA looming on the soundtrack? In other words, does she feel like a swimmer out of water?

Plante, a onetime competitive swimmer, captures the prepping and coaching, the ups and downs, and above all the beauty of the swimmers (all real-life professionals) diving into pools and undulating through them. The picture’s centre piece is a long sequence following Nadia and her teammates as they let loose, downing endless shots, wilding, dancing, and ending up in a fuck party with boy athletes like Nadia’s hookup, a Lebanese fencer (Eli Jean Tahchi). The film’s overall approach is poetically trippy, its French and English dialogue minimal.

In Sebastien Pilote’s 2018 picture La disparition des lucioles (The Fireflies Are Gone), a rebellious teenage girl on the cusp of her adult life contrasts with Pilote characters like the salesman in the moving Le Vendeur (2011), who are facing the end of theirs. In 2020, the writer-director completed his most ambitious production, Maria Chapdelaine, the fourth film adaptation of Louis Hémon’s classic novel.

Pilote sees the story as “an anti-Western” he told me at the pre-Pandemic, 2018 edition of the Toronto International Film Festival. “It’s a novel that I’ve known for a long time,” he continued. “My idea is to return to its simplicity, the great forces.” Positioned as the Québec movie of the year, production got delayed by Covid-19 and was supposed to launch in the fall. At this point, the release has been delayed until next month.

Like Catherine in Goddess of the Fireflies, Maria Chapdelaine (Sara Monpetit) is a sixteen-years-old. Unlike Catherine, she is a hard-working farm girl surviving rural life in Lac Saint-Jean with her beloved family. The mythic storyline revolves around her relationships with the three men who desire her François Paradis, a courier-de-bois and lumberjack (Émile Schneider); Lorenzo Surprenant (Robert Naylor), who can give her a comfortable life in the US, and Eutrope Gagnon (Antoine Olivier-Pilon), a regular guy farmer. The casting of girlish Sara Monpetit is in stark contrast to sensuous and glamorous Carole Laure, who played the character in Gilles Carle’s 1983 adaptation, produced as both a feature film and a mini-series during a period when that was a thing.

My last visit to a movie theatre was way back in early summer for a press screening of Daniel Roby’s Suspect Number One (Target Number One). The taut thriller cross-cuts between the stories of real-life maverick investigative journalist Victor Malarek (Josh Hartnett) and young heroin addict Daniel Legér (Antoine Olivier Pilon), who gets entrapped by cops needing a bust, and gets locked up in a Thai prison as a supposed bigtime dealer. Malarek takes on Daniel’s case and fights to get him exonerated. Oliver Pilon, also in Maria Chapdelaine, was frighteningly powerful as the out of control teenage boy in Xavier Dolan’s brilliant film, Mommy.

Speaking of Xavier Dolan, he will be making his television debut with a five-part mini-series called The Night Logan Woke Up, based on a play by Michel Marc Bouchard. As usual, Dolan will write, direct, and who knows what else? The show is slated to launch in 2022 when hopefully the shadow on Corona will be long lone.