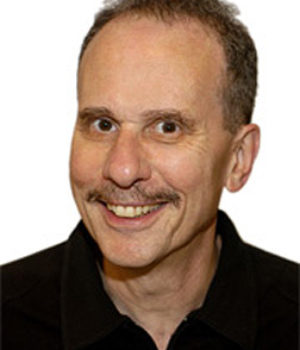 When reality confronts fantasy in Quebec moviemaker Alexandre Franchi’s debut feature, The Wild Hunt, they slide in and out of each other, then get toxic. Billed as a “modern medieval saga,” the film’s distressed protagonist is a forty-year-old Montrealer whose girlfriend prefers being a kidnapped princess in an elaborate Sword and Strategy re-enactment game to living with him and his sick father. 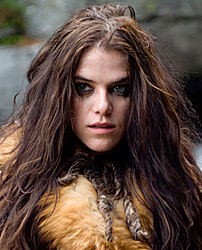 unfolds. When he arrives, Erik faces off with the most over-the-top of the gamers, his older brother Bjorn (Mark A. Krupa, who wrote the story and co-authored the screenplay). Erik is understandably fed up with Bjorn, a Thor-crazed “warrior leader” seemingly indifferent to Erik’s real-life challenges. “I know you’re busy,” he says ironically to his ranting brother, whose mythic view of himself precludes cleaning up Dad’s shit.

The relationship shifts when Bjorn, who looks like a refugee from an Asterix cartoon and whose fake Norse accent sounds like Triumph the Comic Insult Dog, convinces Erik he’s got to play the game to win Lyn back from the LARPer she has a yen for:  the “the dreaded shaman Murtagh” (Trevor Hayes, pictured below). Overjoyed that Lyn digs him in character, Erik exclaims, “I will 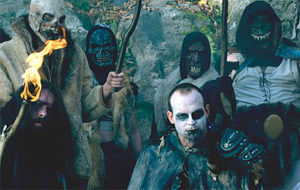 fight off guys with rubber swords and beer bellies to be with you.” But he doesn’t realize to what extent his “love quest” has enraged the increasingly sinister Murtagh, who in the context of the game believes he must sacrifice Princess Evelyn to unleash the beast within and the horned god. So once upon a time, actual rivalry turns fantasy into bloody violence.

While this shrewdly high-concept picture could turn to be a cult item for gaming geeks, (not to mention a calling card for the filmmakers), The Wild Hunt is as much satirical comedy as it is “modern medieval saga” or damsel in distress thriller. Like the 2008 doc Second Skin, which scrutinizes people obsessed with Massively Multiplayer Online games like World of Warcraft, Franchi and Krupa prod the phenomenon of fantasy re-enactmnent.

Although the filmmakers clearly empathize with the LARPers’ need to escape from sterile lives into nature, ritual, and mythology, they imply that many of these costumed devotees of oracular art are harebrained local losers. Laughs come from numerous anachronisms and disjunctions. For instance, King Argyle (Nicolas Wright) makes a convincing speech in Medievalese, but then he grabs an aerosol can and sprays his hair. In another scene, Evelyn breaks decorum when she tells a irate Murtagh, his eyes circled with black paint, “If it’s not fun I’m going to take this fucking cat suit off and leave.”

Naturally, the characters constantly jump out of their alternate identities to engage in vehement arguments about the game’s complicated, arcane rules. At a turning point moment, Murtagh is informed that his spell has just expired, and he just lost a tactical advantage. The film’s constant fluctuations in and out of decorum are funny, but they also drive the picture’s central narrative tension: will the situation spin out of control and get far less amusing?

An ex-banker turned filmmaker, Alexandre Franchi displays considerable skill with his first feature. Performances are credible, the tonal shifts happen smoothly, and considering its miniscule budget, the 35mm film looks big and populated. Franchi and his collaborators pulled off a smart move when they decided to shoot much of the picture in the Duchy of Bicolline, a LARP venue in
northeastern Quebec. In exchange for points in a Canadian flick that could actually earn some money, the Duchy made available its 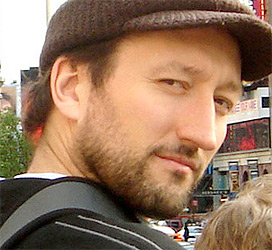 ready-for-camera mise-en-scène of forest and village complete with one hundred buildings, bridges over streams, an inn, a fort, a castle, and a Viking ship. Who needs Warner’s when you’ve got a backlot near Shawinigan?

One unavoidable limitation of a shoestring budget was that a production loaded with EXT. NIGHT sequences couldn’t afford sophisticated after dark lighting. Complicated action scenes, some of them involving dozens of extras, were shot day-for-night. The murky blue images can be seen as evocative and impressionistic, but they can also appear monotonously uniform, sometimes obscuring action and making it look chaotic.

The many day-for-night scenes didn’t seem to bother viewers at Slamdance, the Sundance Film Festival’s alter-ego event, or the Toronto International Film Festival. One of only ten competing movies at Slamdance, The Wild Hunt picked up the Audience “Sparky” Award for best narrative picture. It also took the Best Canadian First Feature prize at TIFF, which later placed it on its list of the Top Ten Canadian films of the year.

The 2010 Prix Jutra gala moved this year from the Radio-Canada studio where it usually unfolds to La Tohu, described on its website as “a leader in the circus arts, from creation, training and production, right up to, of course, performance.” Built on a sprawling site that was once a quarry and a landfill, the main building of La Tohu (an abbreviation for a French expression referring to crazy energy) is a cylindrical structure in Montreal North. Minutes away from the ugly and scary elevated 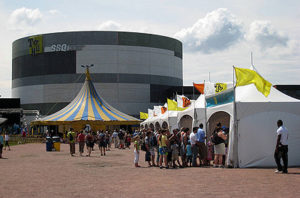 Metropolitan expressway, La Tohu was conceived of as an oasis in an urban wasteland bordering the district of St. Michel. La soirée des Jutra took place in La Tohu’s gigantic circular performance hall while the media covered the event in a nearby circus tent.

The soirée was one of the most anticipated in the Jutra’s twelve-year history because of the buzz around nominees like Xavier Dolan’s J’ai tué ma mère, Denis Villeneuve’s Polytechnique, and Jean-Philippe Duval’s Dédé, à travers les brumes. Unfortunately, this year’s host, Patrice L’Écuyer, a top TV personality with a reputation for improvisational skills was not particularly inspired. A little tight around the widgets, L’Écuyer got his biggest laugh when he asked award winning actress and Prix Jutra president Danielle Proulx to slap him across the face, which she did.

Crossing paths with Xavier Dolan as he scurried restlessly around the Tohu’s lounge area, I wished him good luck, which he graciously thanked me for even though he clearly didn’t need my blessing.  As the night progressed, J’ai tué ma mère won four Jutras, including the cherry on the cake, Best Film. Picking up his Best Screenplay prize, the 20-year-old Dolan thanked his real 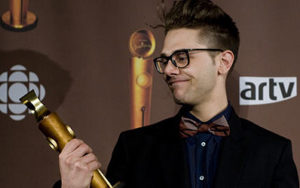 mother, inspiration for the woman who infuriates the hero of his film, “for being my mother.” Aware that federal Heritage Minister James Moore was in the audience, Dolan lamented the state of Canadian movie financing, which “imposes on the audience and the industry standards which under-estimate our intelligence and erase our identity.” Incidentally, Moore did not show up in the media tent to meet the press.

Named Best Actress as the eponymous matriarch in J’ai tué, Anne Dorval’s acceptance speech couldn’t have been more intense. At the Cannes screening of Dolan’s film last year, her emotional temperature ran so high, some feared that she might not make it through the festival. Also giving off a lot of heat, buxom and breathless Sandrine Bisson took the Best Supporting Actress prize for Ricardo Trogi’s nostalgic comedy, 1981.

For many in the industry, 20-year-old Dolan’s talent and international profile (I Killed My Mother was named the year’s biggest success outside of Quebec), are signs that the Quebec industry is flourishing. Observers also point to the career of fortysomething Denis Villeneuve, whose Polytechnique picked up five Jutras including Best Director, as another signal that Quebec moviemaking has a bright future.

Probably because of the traumatic impact of Polytechnique’s real-life subject, Villeneuve seemed subdued at the gala, as did actor Maxim Gaudette, who won Best Supporting Actor for his portrayal of the maniacal killer of fourteen female engineering students. As for adventurous DP Pierre Gill, whose evocative black and white images resulted from deep collaboration with Villeneuve, he accepted his Best Cinematography award wearing a silver suit and T-shirt from star Marc-André Grondin (C.R.A.Z.Y., 5150 rue des ormes), sporting a jaunty fedora.

This year’s Jutra-Hommage, a career achievement award, went to one of the architects of modern Quebec cinema, René Malo, marking the first time the prize has gone to a distributor. Malo, also a producer with credits that include Denys Arcand’s Le Déclin de l’empire américain, followed Dolan’s lead and shot out a message to Heritage Minister Moore, asking him to take a firm 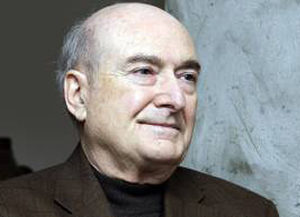 stand on film pirating, “a cancer on our industry.” Just before the Jutra gala, Montréal’s Geremi Adam, or Maven, became the first Canadian movie pirate to be found guilty of the crime and imprisoned (for two and a half months).

Ghosts hovering over the proceedings were called up by tributes to the late filmmakers Gilles Carle, Pierre Falardeau, and Marcel Simard, who committed suicide in early March after reportedly meeting with bankers to discuss the collapse of his company, Virage Productions. His wife Monique, director of French production at the National Film Board, survives the highly respected producer-director.

At the end of the Jutra ceremony, the Best Picture award was presented by actor-director Luc Picard and singer-actress Chloé Sainte-Marie (pictured at left), Gilles Carle’s compagne of many years, the lover who saw him through his Parkinson’s Disease, 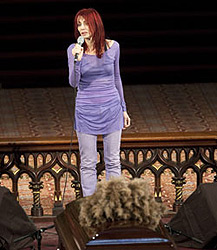 and who many Quebeckers consider to be more of a saint than Frère André, founder of Montreal’s Oratoire Saint-Joseph and recently designated to be canonized in October.  At an awards ceremony packed with beautiful women dressed to kill, the fire red-haired Sainte-Marie wore a lilac top and jeans outfit much like the one she put on for Carle’s funeral.

La soirée des Jutra drew one million viewers to its broadcast on Radio Canada, but that doesn’t mean it was acclaimed by all. Richard Therrien of the Quebec City daily, Le Soleil expected more emotion and more wit in a year when the competition was so hot. For instance, he thought that when Sébastien Ricard received his best actor prize for Dédé, the actor/rapper “seemed like a reader of news in a Radio-Canada studio” as he delivered a message of hope for Quebec sovereignty.

And Something about Genie

The only Prix Jutra nod to the massive box-office hit De père en flic was the Billet d’or for its status as the year’s top ticket-seller. The movie has also been named winner of this year’s Golden Reel Genie, which means that 2009’s most financially successful Canadian picture has yet to be seen in most of Canada, i.e. the parts where they speak English.

Last month, I pointed out another absurdity: the fact that Dédé, à travers les brumes, nominated in ten Jutra categories, didn’t receive a single Genie nod. It turns out that the Genies ignored both Dédé and Bernard Émond’s La Donation because their producers didn’t submit them for consideration.  Roger Frappier, whose company made Dédé, believes that Genie nominations and awards for Québécois films have so little impact on their English-Canadian box-office, submissions are a waste of time and money.

On the other hand, J’ai tué ma mère was submitted for consideration and picked up only one mention: the Claude Jutra Award for feature film debut for Xavier Dolan. When Louis Dussault, whose distribution company K-Films Amérique carefully nurtured the picture, got the news, he went ballistic, listing the innumerable honours bestowed on J’ai tué and wondering about the Genie selectors, “Where do they live? On what planet?”

The Peripatetic Metaphors of Lip Service