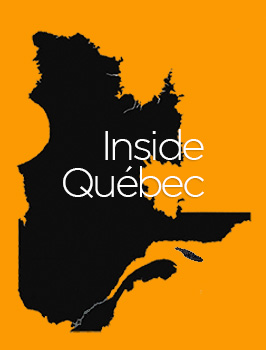 An ominous cloud has loomed over Denys Arcand’s follow-up to his Oscar winning Barbarian Invasions ever since the Quebec commercial launch of his new film was postponed from mid-May to December 7 – ostensibly because of postproduction snags. The delay triggered negative chatter that became louder when L’âge des ténèbres (Days of Darkness) failed to make it into the Cannes Film Festival’s Official Competition. The picture did play at the fest’s closing gala to an appreciative audience, but the media, including Québec’s, complained of their disappointment.

Following Cannes, Arcand eliminated seven minutes from the movie’s international version and 2.5 from the one designated for Québec. Then after a friendly reception, and mixed reviews, at the Toronto International Film Festival, Days of Darkness opened in France and Belgium. French moviegoers, who loved Barbarian Invasions, stayed away from the picture while critiques ran the gamut from lukewarm to savage. A veteran Quebec journalist called the French reaction “a critical lynching,” one publication referring to Arcand as “an old asshole” who hates the modern world because he’s out of the loop, another portraying him as a burnt-out case unloading tedious clichés. 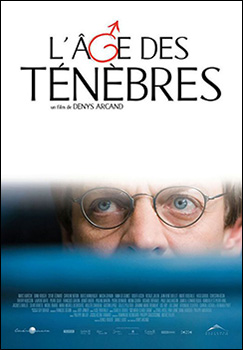 On a more positive note, a Canadian selection committee endorsed L’âge des ténèbres by choosing it to vie for the 2008 Oscar nomination in the best foreign language category. If the Academy of Motion Picture Arts and Sciences gives Arcand its blessing, he will have his fourth nomination, and his second shot at a win.

This prospect doesn’t necessarily impress Denys Arcand, who keeps his distance from the fame game. As for the Québec media, it was far more interested in the fact that in late September, Days of Darkness played for one week on a single screen in, of all places, Grande Prairie, Alberta. The film’s distributors were complying with a rule that a film must have a commercial run to be eligible for nomination, but journalists here wondered why Arcand’s movie was shown in such a remote venue, far from his home territory. Was this a tactic to avoid critical reactions that would tarnish the movie’s December release? No, said the distributors, claiming that the only available screen in all of Canada was the one in Grande Prairie.

Just when it looked like Québecers would be deprived of an advance look at Days of Darkness, the film screened once to a sold-out house at Montreal’s recent Festival du nouveau cinéma. From Arcand’s lushly operatic opening scene, featuring Rufus Wainwright and a curvaceous reclining nude, to the picture’s tentatively hopeful finale, the audience seemed to thoroughly enjoy itself. They snickered knowingly at the satire of a techno-crazed world descending into irredeemable corruption. They fell silent during the movie’s painful confrontations with human misery, and laughed uproariously at Arcand’s sudden shifts to slapstick right out of a 1950s Danny Kaye movie. 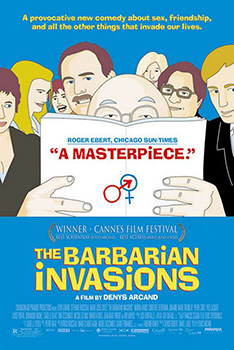 When asked about the crummy French box office and the pans that have dogged his new movie, Arcand was philosophical. Although his Decline of the American Empire was a big hit in France, Italy, and Spain, it tanked in England. Then a few years later, Jesus of Montreal “did nothing” in the countries where Decline was a hit, but in London, “it played for a year in a big theatre with 1000 seats.” And for some reason, said the bemused filmmaker, all his films have worked very well in Australia, “a country where I’ve never been, and never done promotion.”

On the other hand, while Marc Labrèche’s performance as a haggard, ashen-faced nowhereman is dead-on, the character is too much on one note, and his monotonous fantasies are not as ridiculous, or revealing, as they could be. Moreover, Days of Darkness is surprisingly derivative of American Beauty, and images from Federico Fellini, Francis Coppola, and Stanley Kubrick. Sometimes, Arcand miscalculates, for instance with a parody of a scene in Quentin Tarantino’s Kill Bill that is itself a parody.

This year’s most suspenseful industry story won’t play out its third act until Days of Darkness gets released in December. Considering the audience reaction at the Festival du nouveau cinéma screening I attended, the movie will probably thrive despite the slings and arrows that have been hurled at it. 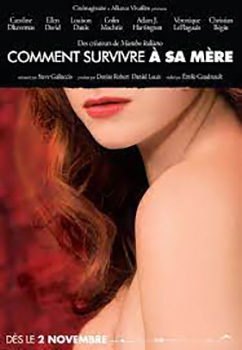 Meanwhile, another production from Arcand’s producer and wife, the hugely successful Denise Robert, is an almost guaranteed hit. A November release, Surviving My Mother depicts a woman (Ellen David), who tries to get closer to her daughter (Caroline Dhavernas) after her own mother dies, and makes unsettling discoveries about the twenty something’s sexual life. The envelope-pushing, English-language dramedy was written by Steve Galluccio and directed by Émile Gaudreault, the team responsible for the popular 2003 ethnic comedy, Mambo Italiano.

Sadly, a foray into documentary was a surprise flop for Robert’s company Cinémaginaire. Filmmaker and TV interviewer Paul Arcand’s Les voleurs d’enfance, an exposé of child abuse, was one of the most theatrically successful documentaries ever made in this country. But his Québec sur ordonnance, which reveals the uneasy relationship between Québecers and prescription drugs, lost $660000 for its distributor, Alliance Vivafilm.

After a period of trials and tribulations, the aforementioned Festival du nouveau cinéma enjoyed one of its best editions in a 36 year history. By mid-fest, ticket sales had already surpassed the box office of the entire 2006 event. 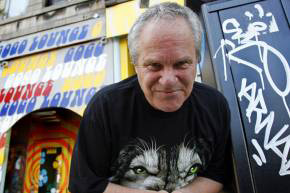 For the first time, the festival’s rascally founder and chief programmer, Claude Chamberlan (pictured), downsized his public profile in favour of executive director Nicolas Girard Deltruc and programmer Julien Fonfrède, who handles the fest’s wacky Temps Ø section. Working with a $2 million budget, the FNC screened 300 films from 40 countries, and ran numerous well-attended events, including lectures, debates, and performances concerning The Future of Cinema.

A festival that trades on its cachet of hip youthfulness, the FCM picks up on titles that have played Toronto and mixes them with its own discoveries. Among the many highlights were Todd Haynes’ Montreal-shot poem to Bob Dylan, I’’m Not There, with its audience-delighting crawl of Québecois names in the end credits; Brian De Palma’s penetrating Iraq War film, Redacted; Thai director Pen-Ek Ratanaruang’s mesmerizing Ploy; and South-Korean visionary Park Chan-wook’s brilliantly designed I’m a Cyborg But That’s O.K., one of the festival’s award winners.

Just before the FNC, and after many tense years, federal agency Telefilm Canada finally signed an accord with Montreal’s biggest movie gathering, the World Film Festival. Dissatisfied with the WFF, and its founder-president Serge Losique, Telefilm and Québec funding agency SODEC had cut off subsidies and even supported a rival event in 2005.

That fest was a one-shot disaster, and in 2007, SODEC restored some of the WFF’s grant money. Because Telefilm was still not back on board by late August, WFF vice-president Danièle Cauchard startled the opening night crowd in Place des Arts by recommending that Prime Minister Stephen Harper kick the ass of Telefilm Executive Director Wayne Clarkson. For whatever reason, the accord means that Telefilm is now back on board, as long as the festival meets certain conditions.

Montreal’s energetic doc house DLI Productions has two new shows in the pipeline. Canadaville USA, made for the CBC recounts Canadian auto parts magnate Frank Stronach’s rescue mission for victims of Hurricane Katrina. The billionaire re-located 300 dislocated residents of New Orleans to a model community he constructed near the remote Louisiana town of Simmesport. Directed by DLI co-founder Abbey Neidik, the film offers an intensely intimate, dramatic view of often troubled urban African-Americans trying to adapt to a world that is rural and mostly white.

DLI’s Inside the Great Magazines, which will air on Global, is an ambitious three hour series packed with information and ideas about publications like Time, Paris Match, Vice, Cosmopolitan, and Playboy. Co-directed by Neidik and his partner and wife, Irene Angelico, Magazines takes viewers from a history of its subject to an inside look at how Time selects its person of the year.

The throughline for the book, laughs Hays, is “Homo Pomo” in that the interviewees are hyper-aware of how gays have been represented in movies. Gays in general, he points out, are “movie nuts,” and the Oscars are the “Gay Super Bowl.”

Being Julia: The Stage Is a World

Dude, Are You Doing this Movie or Not?