For a stage performer, it is a long way from anywhere to Broadway even today, but it must have seemed an impossible distance in rural Canada five years before confederation. Robert Campbell and his wife Jane Draper, immigrants from Scotland, could not have imagined the fame New York`s Great White Way would bring their daughter, May, when she came into this world on June 27, 1862. She was born in Whitby, Ontario, now just a short drive east of Toronto.

May Campbell had a strong singing voice from a very young age and by time she was eight years old, she was a soloist at her church. Five years later, in 1875, she travelled with her younger sister, Flora, to audition at the Adelphi Theatre in Buffalo, New York. Although Flo fainted, May went on to sing an encore and the sisters were hired. Two years later, in 1877, they were becoming regulars on the playbills at Tony Pastor’s Music Hall in New York. They continued their sister act until 1884 when May decided to go it alone. She was even more alone when her first husband died in 1886 but she continued to work. It would take a few more years before Irwin became a true star of Broadway.

It was around this time that movie making was just getting started. Reels were short and most movies were much less than a minute long. Typically they showed everyday scenes: a train pulling into a station, people walking on a busy street. Thomas Edison had started to experiment with movies in 1892 with his first Kinetoscope cameras and had built a studio in West Orange, New Jersey that same year. By 1895 he had made great progress developing his new Vitoscope camera and, of almost greater importance, his projectors, which allowed movies to be seen by a large number of people at the same time. It was also in 1895 that May Irwin was co-starring in the hit Broadway musical of the season, The Widow Jones, written by John J. McNally. Irwin played the role of a wealthy heiress, Beatrice Byke, who goes about dressed as a thread-bare widow to throw any fortune-hunting suitors off her trail. In one scene Irwin and her co-star, John C. Rice, enjoy an extended kiss, or more accurately, a series of little kisses or a whole lot of kissing depending on how you want to look at it. It was the talk of the town and, according to an Edison film historian, the actors were asked to stage their kiss for the camera by the New York World newspaper.

It was filmed in April of 1896 at Edison’s ‘Black Maria’ studio in New Jersey. It lasts all of 18 seconds and was not only the first kiss ever filmed, but it went on to become the most popular Edison Vitascope movie that year. It was played at the first permanent movie theatre in the United States, the 400-seat Vitascope Hall that had opened on June 26th. Admission was 10 cents. For an additional 10 cents patrons could also have a look at Edison’s Vitascope projector. The short movie was, in every sense of the word, a sensation. The scene shocked movie patrons, caused newspapers to editorialize and preachers to preach about the deterioration of moral values. In short, this brief bit of film inadvertently started a tradition about movies that continues to this day.

Many film directories title Edison’s film as The Widow Jones because of the play the scene was taken from, but to almost everyone it is simply known as The Kiss. It was once thought to be the first movie ever shown in Canada when it was projected onto a makeshift screen in West End Park, Ottawa, on July 21, 1896, however the Lumière Brothers Cinematograph had exhibited different films in Montreal on June 27 of that year and so beat The Kiss by less than a month.

The controversy surrounding the film had no impact on Irwin. She became one of the most popular singing stars of her time, and went from success to success. One of the most popular songs from the turn-of-the-century was her rendition of “After the Ball Is Over.” A star of the legitimate stage and musical comedy, as well as vaudeville, 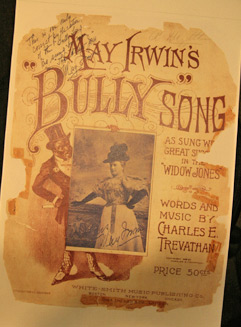 Irwin also made a handful of records on the Victor label. In 1915, at New York`s famed Palace, she recited a little something called “Father`s Old Red Beard” written specifically for her by the then up and coming young composer Irving Berlin.

Irwin retired to a farm in the Thousand Islands, Ontario in 1920 having made just one film for Famous Players in 1914, Mrs. Black Is Back. The stage had made Irwin a wealthy woman, and she was thought to be one of the richest stage performers by the time she passed away in 1938 at the age of 76, leaving behind her second husband and two sons.

A number of years ago Northernstars.ca acquired a song sheet from the The Widow Jones play on which May Irwin had written a note and signed her name. It was well over 110 years old and was in desperate need of restoration. It is also a reflection of its times and is highly offensive both in the images and words. However, we felt it was a direct connection to the very beginning of the motion picture industry and should be saved. In the early Fall of 2007 we turned the crumbling document over to Beatrice Stock of Stock Restoration in Toronto. The song sheet went though more than 50 hours of conservation and restoration over several months and is now one of the most valuable and rare pieces in our ever-growing Northernstars Collection.

This biography is Copyright © 2008 by Ralph Lucas and may not be used without prior written permission. Click here for more information about copyright. All of the still images used on this page were scanned from originals in The Northernstars Collection