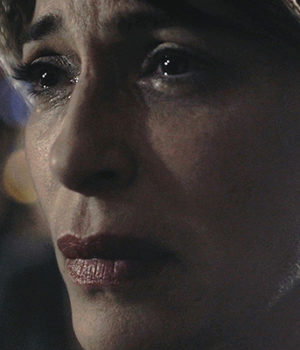 (October 22, 2015 – Beverly Hills, CA) Montreal-born writer-producer-director Isabel Dréan is having quite a year. Already known for her breakthrough work online with the dramatic murder mystery web series, Manigances, her first short film Let Go had its world premiere at Montreal’s FantASIA International Film Festival in September and will have its US premiere this Sunday, October 25, at the 7th Annual Lady Filmmakers Festival.

Isabel Dréan specializes in darker subject-matter ranging from Psychological Thriller to Murder Mystery, from Suspense to Horror. Let Go asks the question: “How do you survive the loss of a child when a family is torn apart by a fatal accident?”

“I asked myself, what scares me the most in life? Losing a child was the most horrific thing I could think of”, said the director about the profound and troubled psychological process that she went through while exploring the theme of this film. What added to the weight of the process is that the film`s star, Clauia Ferri, would share the screen in the 28-minute short with Dréan’s own children, 5-year old, Jaz Côté Dréan and eleven year-old, Milan Côté Dréan, who make their film debuts in this short.

“Independent cinema is an art I want to be part of because, as in life, you have to be willing to take risks, let the film take a life of it’s own… and Let go!”, explained actress Claudia Ferri, who portrays a very tormented mother in this film, while demonstrating a palpable raw intensity that she hadn’t reached in her previous work.

Let Go will have its screening at the Ahrya Fine Arts Theatre at 8556 Wilshire Blvd in Beverly Hills at 7:30PM on Sunday, October 25th.

Season of the Small Screen: CBC

Fear of Dancing a Gem