(February 1, 2021 – Toronto) When I posted our story about the 2021 awards season, I mentioned I would soon have a comment about the Canadian Screen Awards. There were two separate driving forces behind that. The first was something that happened at the 2016 Canadian Screen Awards. Funny man and host Norm MacDonald suggested the unnamed awards should be called The Candys in honour of John Candy, who had died in 1994. The second driving force was a news item or short story, or maybe a short movie. Whatever it was the focus was on some mom and dad who had decided not to name their child until it was old enough to choose their own name. The very first Canadian Screen Awards were held on March 3, 2013. They’re all grown up now. It’s time for the Academy of Canadian Cinema & Television to give their award a name.

Naming an award goes back to the early days of film, the idea coming while silent films still ruled the industry and “talkies” were still a year or so away. The very first Academy Awards were held in 1929. The year before, Toronto-born Mary Pickford was one of the people who voted to approve the design of the Award of Merit, as the Oscar® statuette is properly known. MGM’s art director Cedric Gibbons, another original Academy member, supervised the design of the trophy. Looking for a model, it was suggested he meet with Mexican-born film director and actor Emilio Fernandez, who was at first reluctant but later agreed to pose for the statuette. The most most popular story of where that name came from involves an Academy of Motion Picture Arts and Sciences librarian and future executive director, Margaret Herrick. As the story goes, Herrick, upon seeing the statuette sitting on a table exclaimed “it looks just like my Uncle Oscar!” Another common story involves actress and two-time Academy Award winner Bette Davis, who reportedly named it after her ex-husband, Harmon Oscar Nelson, Jr. Whatever its origin, obviously the nicknamed “Oscar” stuck and today everyone knows about The Oscars.

The Hollywood Foreign Press Association is the organization behind the Golden Globes, a name that accurately describes their organization and the award itself, which was first handed out on January 20, 1944, 77 years ago.

The third in the non-film festival area of film awards is also one of the more prestigious events on the film calendar. The BAFTAs were first handed out on May 29, 1949. The name is an acronym of the organization behind the awards, the British Academy of Film and Television Arts.

The world’s oldest film festival is the Mostra Internazionale d’Arte Cinematografica della Biennale di Venezia, or the Venice Film Festival. It dates to August 1932 and is part the Venice Biennale, which was created by the Venice City Council in 1893. The film festival had handed out awards in the 1930s but in 1949 they launched the Leone d’Oro, the Golden Lion, usually recognized as one of the film industry’s most prestigious and distinguished prizes. To date the only Canadian film to be honoured with a Golden Lion was Atlantic City in 1980. The Canada-France coproduction shared the prize that year with John Cassavetes’ film Gloria.

Then there’s The Golden Bear, the highest prize awarded for the best film at the Berlin International Film Festival, first handed out in 1951. The third of the so-called triple crown of film festivals, the Cannes Film Festival has awarded the Palme d’Or since 1955 and introduced the Caméra d’Or in 1978. The world Gold features in many of the top film awards, which brings me back to the Canadian Screen Awards. 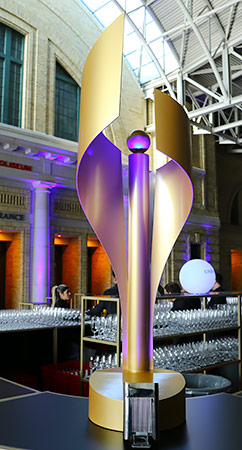 I was there in early 2013 when the newly reconstituted Academy of Canadian Cinema and Television introduced the award, leaving behind the previous awards, the Genie for television, also known starting in 1968 as the Etrog after the man who designed it, and the Gemini for television, which was a beautiful take on the two faces of the industry, comedy and drama.

When I first saw the new award I immediately thought of an angel, the two flowing wings rising as if ready to launch itself into the air, or to break its return to earth. The word angel is a familiar word in the world of theatre and film, although it is usually associated with investors not performers or the various professionals involved in creating movies or stage plays. The Golden Angel is nice, the L’Ange d’Or is nicer and in my opinion very much nicer than the all too plain Canadian Screen Award, or even plainer CSA.To the best of my knowledge (a quick internet search) there is no other Golden Angel Award of Prix L’Ange d’Or.

The COVID-19 pandemic has played havoc with the lives of everyone and disrupted events and forced change on everything from the Toronto Film Festival to Sundance to Cannes and this year will probably be the second year the Canadian Screen Awards are restricted to a virtual awards show. Winning an award is no less important but the glitz and glamour that fuels the public’s imagine or adds a sense of pomp to the pageantry will be missing. When, hopefully, things are more normal in 2022 having a new name for the award might be just the thing to make all of us think we have been saved and there is a new beginning, thanks perhaps in part because of angels.