Home News James vs His Future Self Goes Home

James vs His Future Self Goes Home
by Staff

(March 23, 2020 – Toronto, ON) With the temporary shutdown of most if not all cinemas in Canada, what’s a distributor to do when a film’s potential audience is more or less confined to their homes? Answer: Reach them where they live.

Northern Banner has announced that the sci-fi comedy feature James vs. His Future Self, which had been slated for a major national theatrical release, will now make its debut on home screens. The release date, April 3 remains the same, but the venue is your living room, den, home office or wherever you have your computer. You’ll be able to find it on the Video-on-Demand (VoD) services of BELL, SHAW and iTunes on release day. Rogers and Telus all follow soon. 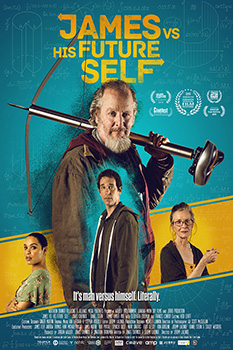 In James vs His Future Self, Jonas Chernick plays James, a brilliant and obsessed particle physicist on the brink of inventing time travel who, in the process, has relegated the only two people who care about him (best friend/crush Courtney, and his edgy sister Meredith) to the sidelines. Daniel Stern is Jimmy, the future, time-travelling version of James, now angry, cynical and driven by regret and loss. Jimmy’s obsessed with righting the wrongs of his life by convincing his younger self to give up his obsession with time travel and to finally stop and smell the roses. Or else.

Direct by Jeremy LaLonde and co-written by LaLonde and Chernick, James vs His Future Self is an existential twist on the time-traveller-arrives-to-save-the-future trope. An homage to the classic sci-fi rom-coms of the 80’s and 90’s, a la Back to the Future, James vs His Future Self is a rare Canadian indie film filled with raunchy humour, heartfelt romance, surprising twists and packed with noteworthy performances.

“We like to tell stories that are honest and emotional and relatable, and part of that is finding a universal hook,” LaLonde said of the script he and Chernick created. “I mean, who hasn’t dreamed of going back and telling their younger selves to make a different choice, or to stop doing what they’re doing? So, we took that idea and explored the ramifications of that premise, wrapped up in this fun, fast-paced comedy, with just enough science and time-travel to satisfy the geeks out there.”

Click here to watch the trailer and learn more about the cast and crew of James vs His Future Self, opening April 3…on a screen right in front of you.