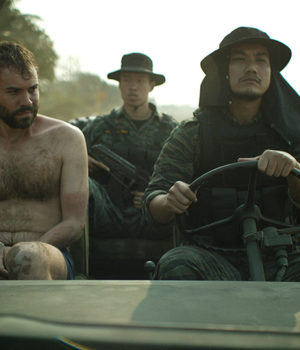 (February 4, 2016 – Toronto, ON) Writer-director Jamie M. Dagg has won the Academy’s Claude Jutra Award, sponsored by Telefilm Canada, for his feature film, River, it was announced today by the Academy of Canadian Cinema & Television. It will be presented at the Canadian Screen Awards on March 13, 2016.

“Jamie M. Dagg’s command of the complex moral story and landscape in River surpasses what we normally see from debutant directors,” said Academy Chair Martin Katz. “He is well-deserving of the Claude Jutra Award.”

In River, Rossif Sutherland plays a volunteer doctor in Laos who becomes a fugitive after he intervenes in the sexual assault of a young woman. When the assailant’s body is pulled from the Mekong River, things quickly spiral out of control.

Rossif Sutherland received a Canadian Screen Award nomination for his lead performance in River with a gripping performance that carries the audience across Laos and into the chaos that shows how an attempt to do the right thing can destroy a man’s life.

River will be released in select theatres by Elevation Pictures on March 4.

Established in 1993 in honour of the late Quebec filmmaker Claude Jutra who directed the landmark Canadian classic Mon Oncle Antoine, his namesake award celebrates the outstanding debut of a first-time filmmaker. The Academy’s Claude Jutra Award winner is selected by a jury of Canadian filmmakers. The award is sponsored by Telefilm Canada. Images courtesy of Elevation Pictures.