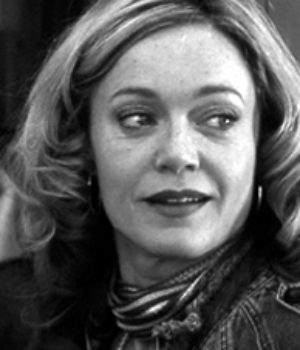 Self-described “wild rose,” after Alberta’s provincial flower, Rebecca Jenkins was born in Innisfail, Alberta, in 1959. As a child she spent time in Halifax, and grew up performing as an actor and a singer. She originally planned to pursue a career in singing and toured with the Canadian band The Parachute Club and singer Jane Siberry during the mid-1980s.

Her first film experience was as a stuntwoman in the Judge Reinhold feature Head Office (1985). Her first acting job was in the 1988 CBC-TV movie Family Reunion, and she was nominated for a Gemini Award for her role as Caitlin. She also appeared in Anne Wheeler’s Cowboys Don’t Cry (1988) and the two got along so well that Wheeler cast her to play the fictional Daisy Cooper (pictured at right) in her next feature Bye Bye Blues (1989), which would become her big break.

As Daisy Cooper, Jenkins played a Canadian Second World War wife whose husband (Michael Ontkean) is captured when Singapore falls to the Japanese. She joins a local swing band to pay the bills, which begins to enjoy popular success as the years pass. She finds herself falling in love with Max, the band`s trombone player, and when her husband returns from the war she has to choose between her old life and 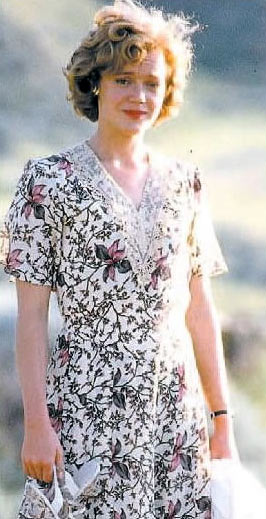 new life. Bye Bye Blues was nominated for 13 Genie Awards in 1990, winning three, including one for Jenkins for Best Actress.

Film roles began to pour in following the success of Bye Bye Blues. In 1991, Jenkins appeared alongside Kevin Spacey, Chris Cooper and Calista Flockhart in the television movie Darrow. She was also cast in the Canadian features South of Wawa (1991) and Clearcut (1991) with Graham Greene and Tom Jackson.

Roles in the made-for-television movies ‘Til Death Do Us Part (1992), Split Images (1992) and Tim Robbins’ political satire Bob Roberts (1992) followed, as well as the role of the narrator for the short-lived X-Men series in 1992.

She won a recurring role in the short-lived series Destiny Ridge (1993), where she met her future husband Markus Wade, a boom operator. She also appeared in the made-for-television movie Harvest for the Heart (1994), as Maddy Hansen, a bride stood up at the altar by her fiance, and in The Legend of the Ruby Silver as a widow who joins a con man and an alcoholic miner in searching for a long dead silver mine. She was also asked by Leonard Cohen to appear in his “Closing Time” video.

In 1996, Jenkins gave birth to her daughter Sadie, who she considered naming Daisy, after her character in Bye Bye Blues. She was also cast in the CBC-TV series, Black Harbour, as Katherine Hubbard, a sophisticated L.A. restauranteur who returns home to Nova Scotia with 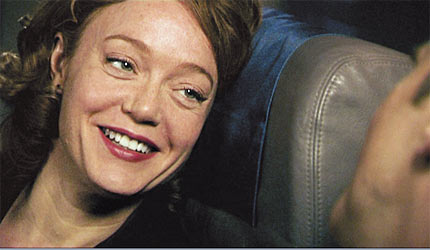 her painfully Californian family when her mother falls ill. The series aired for three years, and in 1999 she was nominated for a Gemini Award for her performance.

A string of made-for-television movies followed: Angels in the Infield (2000), Catch a Falling Star (2000), And Never Let Her Go (2001) and Sex, Lies and Obsession (2001). In 2002, Jenkins appeared in Bob Gale`s Interstate 60, co-starring Gary Oldman, James Marsden and Chris Cooper. She also co-starred in the acclaimed feature Marion Bridge (2002), adapted from Daniel MacIvor‘s play and directed by Wiebke von Carolsfeld. That same year, Past Perfect (pictured at left) was released, starring Jenkins and Daniel MacIvor as a couple meeting and falling in love on a cross-country flight, and then two years later as their relationship threatens to fall apart.

The first half of the first decade of the new century continued to provide Jenkins with solid opportunities to show the broad canvas of her capabilities. She appeared as Yvonne (“The Sunrise”) in the CBC-TV miniseries The Atwood Stories (2003), which was based on the short stories of Margaret Atwood. She was also cast in Deepa Mehta`s The Republic of Love and the NBC miniseries 10.5, about a massive earthquake striking the West Coast and co-starring Beau Bridges, David Cubitt and Kim Delaney. Her co-starring role with a large cast of Northernstars in Wilby Wonderful showed an older, more mature and very confident actor.

Rebecca Jenkins continues to perform as a singer on occasion, as in the recent tribute to Joni Mitchell, and the Canadian Landmine Foundation Benefit.

This biography is Copyright © 2003 by: Catherine Solmes and may not be reproduced without written permission. Click here for more information about copyright.