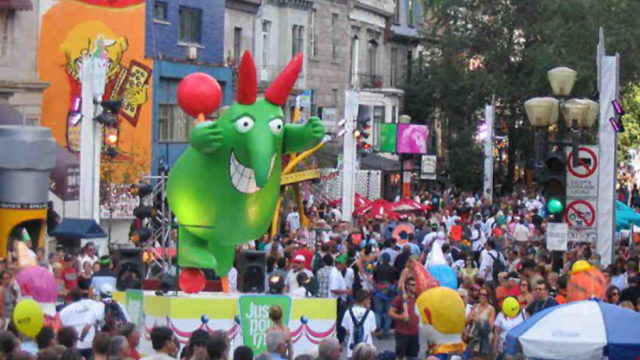 JFL and the Hollywood Connection
by Jim Slotek

Almost exactly 20 years ago, Hollywood accosted my friend Tracy Dawson in the lobby of the Comedy Nest in Montreal.

As we were talking in the lobby after a very good set at Montreal’s Just For Laughs festival, Tracy – a comedian who has since won a Canadian Comedy Award for her role in Jason Priestley’s HBO series Call Me Fitz – was approached by what you might call a “suit,” though I believe he was wearing a golf shirt.

“I’m so-and-so from Fox,” he enthused. “I saw your set and we have to talk. I think you have Fox energy!”


Nothing ever came of that exchange. But I still like to kid Tracy about her Fox energy. But it was a snapshot of what used to go on at one of North America’s top comedy festivals, which wrapped up its 36th edition this past weekend under a new owner named Howie Mandel.

The ‘90s were likely the apex of JFL’s impact on all of Hollywood, and certainly U.S. network television. Thanks to the likes of Roseanne, Tim Allen (Home Improvement) and Brett Butler (Grace Under Fire), the networks decided that a quick-and-easy way to create a hit sitcom was to find a comedian with a “bit,” and turn it into a series.

At the peak of this craze, some 600 talent scouts descended on the festival each year, with “holding deals” and “development deals” in hand. A holding deal meant that they liked your style and would set you up in L.A. for a year, give you a sum of money, usually in the high five-figures and send you on auditions. The holy grail was a development deal, which meant a commitment to produce a show based on your material, and which usually involved a six-figure signing sum.

(One odd juxtaposition of these two deals: Toronto comedian Lynn Shawcroft got an $80,000 development deal from ABC after a seven-minute set at JFL. She would later marry – and is now the widow of – comic genius Mitch Hedberg, who signed a $350,000 development deal with CBS, also in Montreal).

Often, a holding deal was a “defensive signing,” in which a talent executive didn’t really have any plans for the comedian, but didn’t want to have to answer for it if the comic was signed by someone else and became hot. Shawcroft was one who felt trapped by the deal, but took advantage of it in every way she could, up to and including taking paid-for acting lessons.


Sometimes a studio had its own agenda. Comedian Sean Cullen, then with his sketch troupe Corky & The Juice Pigs, signed a development deal with Disney, who loudly touted the boys as, “the new Three Stooges!” When they got to L.A., it turned out Disney meant that literally and wanted them to perform as The New Three Stooges. They balked. (Years later, the project ended up at Fox, which released a Three Stooges movie in 2012, with a Canadian, Mad-TV’s Will Sasso, as Curly).

These are memories of a mainly pre-Internet era. In this century sitcoms waned (though a few, like The Big Bang Theory, remain among the top-rated shows on network TV). The formula of turning a comedian’s bit into a show has long since lost favour. And a handful of Canadian comedians who’ve found their way onto sitcoms recently, however briefly – including Jon Dore and Ryan Belleville – have done it the old-fashioned way, by auditioning during pilot season.

In this century, comedians have found other routes to success. Russell Peters, who’s now on the Forbes list for highest-paid comedians, famously became famous when someone uploaded his half-hour special from CTV/The Comedy Network’s Comedy Now. It began showing up on YouTube in bits of a couple of minutes each, which (given that his material was mainly about immigrants and their cultures) was emailed from friend to friend around the world. Soon, he had enough fans to fill halls in every city in the world.

There’s even a school for comedy, at Toronto’s Humber College, whose most famous alumnus is Nathan Fielder, creator of the hit Comedy Central “cringe comedy” series Nathan For You.

But Just For Laughs carries on, and remains a prestigious place to play and be seen by the entire comedy industry. The street festival is twice the size it was when it was “Suit Central,” and there are still industry people checking out new blood – managers, talent agents, club bookers.

“It’s no longer the era of everyone walking out with a serious development deal,” says Just For Laughs president Bruce Hills. “Some people get deals out of the event, but not on a napkin in the bar like it used to be.”

“But a standout performance here can still be a very key piece that leads to a deal down the road. We’ll introduce an artist who, two months later, lands a deal. New Faces shows are packed with industry. You’ve got Judd Apatow wandering around, Jim Carrey, Mike Myers, executives from late night television, studios, YouTube, Netflix. It’s all traction for artists careers.”


And with new owner Mandel – who says he resents the fact that he ever had to leave Canada to find work – it just might find a way to rekindle its spark as a launching pad for Canadian stars.
“We’re always looking for new ways to give Canadian talent more exposure,” says Hills. “We’re in Canada, and we’re the biggest producer of comics in the world, just like we’re the greatest producer of hockey players in the world.”