(February 2, 2017 – Toronto, ON) The Academy of Canadian Cinema & Television has announced that director Johnny Ma has won the Academy’s Best First Feature award, sponsored by Telefilm Canada, for his feature film, Old Stone. The award celebrates the outstanding debut of a first-time feature filmmaker.

“Johnny Ma’s nuanced feature debut draws the viewer into a world of suspense with a maturity that is authentic and remarkable. He is an exciting talent for Canada to count as our own!” said Academy CEO, Beth Janson. 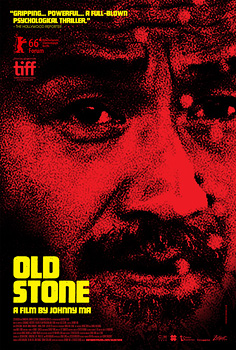 plunged into a Kafkaesque nightmare where no good deed goes unpunished. Beginning as a gritty social-realist drama before u-turning into a blood drenched noir, Old Stone follows the repercussions of a car accident in a society where life is cheap and compassion is ruinously expensive.

The film had its North American premiere at TIFF in the Discovery Programme and was awarded the City of Toronto Award for Best Canadian First Feature Film. The film can be pre-ordered on iTunes for viewing after April 7, 2017.