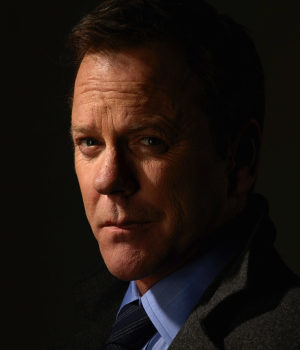 (August 8, 2016 – Toronto, ON) Kiefer Sutherland, indelibly linked to his Jack Bauer character from the series 24, returns to the small screen next month in the ABC-CTV drama series Designated Survivor (see links below). Set in some possible future, the British-born Canadian actor plays some low level United States cabinet member with no political ambitions beyond his current position. And then, as often happens in movies and television, the impossible happens.

In this case the impossible is a catastrophic attack that kills the sitting President and most of his administration. Following the constitutional guidelines for succession, Sutherland’s character, Tom Kirkman, is suddenly and totally unexpectedly thrown into a position he never aspired to hold. But he is the Designated Survivor and there’s not much he can do about but accept his fate.

Some US publications have already proclaimed the series a “clear-cut hit” in this fall’s TV schedule. Speaking at a Television Critics Association press event on August 4th, Executive Producer Jon Harmon Feldman described the series as having “the aspirational qualities of The West Wing with the terrorism whodunit of Homeland and the political

machinations of House of Cards.

Kiefer Sutherland was quoted as describing his character as a reluctant participant. “Through the first five episodes he’s trying to find an exit.”