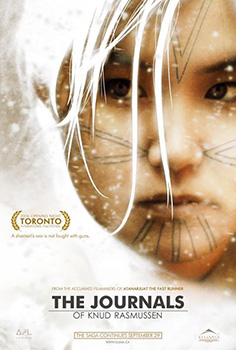 The Journals of Knud Rasmussen
Review by Paul Townend

(2006 – Toronto, ON) The Journals of Knud Rasmussen was inspired by the actual journals of a Danish anthropologist, Knud Rasmussen (Jens Jorn Spottag), who, in 1922, met and lived with the extended family of the Inuit shaman Avva (Pakak Innukshuk) that included his wife Orulu (Neeve Irngaut Uttak) and, most importantly, his daughter Apak (Leah Angutimarik), who has some of his powers.

Moving very slowly with little to no plot line, the film languidly meanders from one scene to the next with very little to connect them except the occasional voiceover by Avva. He tells the Danes the story of his birth and how be became to be a shaman. Apak doesn’t do or say much, but she does conjure up the spirit of her first husband, with whom she prefers to make love to rather than her second, living, spouse. Avva appears troubled by this – after all, people will talk – but she is indifferent to his protestations.

Approximately an hour into story – a story only in the loosest sense of the word – Avva, his family and the Danes trek north to find better hunting grounds. There they discover another family unit that is ruled by a former shaman who has given over the spirit world in favour of the word in the Bible. He invites Avva and his group to share their food, but only if they join him in singing Christian songs. At first Avva resists, but Apak succumbs, and eventually so does Avva. The final scene has him driving away the spirits that served him well all his life so he can join the Christian Inuit group.

There is a lot going on in The Journals of Knud Rasmussen, but much of it is left unsaid. The clash of cultures and values is not so much a clash, but a murmur. The film flirts with tedium and is relieved only the authenticity of its subject matter, performances, and by some stunning vistas of the High Arctic, where dreams and spirits are real and the living is hard. Co-directors Zacharias Kunuk and Norman Cohn of the Nunavut-based Igloolik Isuma Productions were responsible for the Cannes- and Genie-winning Atanarjuat (The Fast Runner) several years ago, and the marketing of this, their sophomore feature, tries to build on the success of their previous film, which went on to be a genuine hit at the box office.

However, The Journals is not Atanarjuat. It lacks its narrative drive or shock of the new (Atanarjuat was the first-ever Inuit-language feature). It seems closer to Kunuk’s celebrated short films and videos about Inuit life and culture. It is elliptical, elusive and has the looseness of a home movie.

Cohn and Kunuk seem content to make whatever point they are trying to make about the old ways vs. the new in a roundabout, leisurely fashion. The only trouble with this approach, one might come out of this film and justifiably ask, “What the heck was that all about?”

Also see: The cast and crew of The Journals of Knud Rasmussen (2006)

This review is Copyright © 2006 by Northernstars.ca. Click here for more information about copyright.