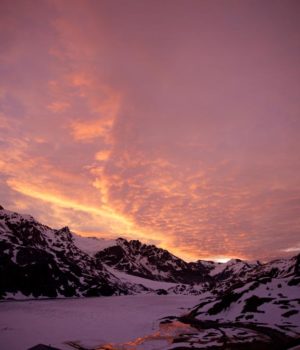 (June 6, 2016 – Toronto, ON) When this year’s Hot Docs festival came to a close, the film Koneline: our land beautiful was named Best Canadian Feature. If you missed one of the three screenings the film enjoyed at the festival, it returns on June 10th for a full week’s run.

Called “visually stunning” by NOW Magazine, the film was directed by Nettie Wild who will be in attendance at screenings on the opening weekend, Friday June 10-12. Northernstars interviewed Wild when she was here for the festival.

Celebrated for using art to seek beauty and complexity where you least expect to find them, the film continues to collect rave reviews for its fair-minded and sensual exploration of northwest British Columbia and the extraordinary people who move across that land.

Equally extraordinary is the work of cameraman Van Royko who won the 2016 best documentary cinematography award from the Canadian Society of Cinematographers for his work on this film, which he shot in wide screen. The visual poetry he helped create delights in exploding stereotypes. Heidi Gutfrucht, at once a big game hunter and a fierce environmentalist, swims her 17 horses across the massive Stikine River. A Tahltan First Nation diamond driller bores deep into the same territory that his elders are fighting to protect. White hunters carry bows and arrows while Tahltan elders shoot moose with high-powered rifles.

KONELĪNE: our land beautiful is a cinematic poem designed to cut through the rhetorical roar of our times. Click here for more information about times and tickets.