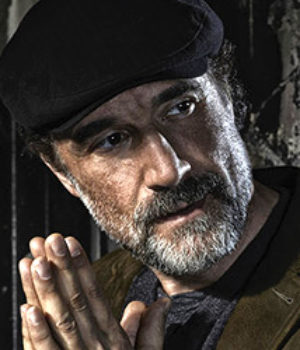 (2003 – Toronto, ON) Often mistaken for Law & Order: SVU and Oz star Christopher Meloni, and compared to Robert De Niro, Elias Koteas was born on March 11, 1961, in Montréal, Québec. As a child, he considered architecture as a career, but was seduced by the television atmosphere of Happy Days, assuming the actors were having as much fun as their characters. But it was seeing Nick Nolte’s performance in the mini-series Rich Man, Poor Man that really convinced him to become an actor.

After high school, Koteas attended Vanier College in Montréal before leaving to attend the American Academy of Dramatic Arts in New York City in 1981. While there he performed in a number of plays, including Holy Ghosts, The Changing Room, Life Class and The Lady`s Not for Burning. After graduation, Koteas attended the Actors Studio, studying under Ellyn Burstyn and Peter Masterson, and appearing in Terry Neal`s Future and Rainbow Dancing. Hollywood producer Fred Roos saw his performance in the latter and cast him as Eddie in the Disney film One Magic Christmas (1985), which also featured Sarah Polley’s first film performance. A role in the television movie Private Sessions (1985) soon followed.

In 1987, he was cast in the John Hughes-scripted teen drama Some Kind of Wonderful, which co-starred Eric Stoltz, Mary Stuart Masterson and Lea Thompson. He also appeared in the Francis Ford Coppola military drama Gardens of Stone (1987). The following year brought him a role in another John Hughes film, She’s Having a Baby (1988), and a role in another Francis Ford Coppola film, Tucker: The Man and His Dream (1988). His old acting teacher, Peter Masterson, directed him in Full Moon in Blue Water (1988), along with Gene Hackman and Burgess Meredith. That same year, Koteas’ Mediterranean good looks helped win him the role of a young Aristotle Onassis in the television movie Onassis: The Richest Man in the World (1988).

In 1989, Koteas appeared in another Peter Masterson film, a western called Blood Red and a comedy entitled Friends, Lovers and Lunatics. But it was his starring role as Victor Malarek in the Canadian feature Malarek that really got him noticed. His portrayal of the troubled street kid-turned-reporter, earned him a nomination for best actor at the 1989 Genie Awards.


Hollywood was beginning to take notice of the young, intense actor, and in 1990 Koteas was cast in four major features including Desperate Measures, alongside Anthony Hopkins, and Backstreet Dreams with Brooke Shields. He also turned in some solid, notable performances in Paul Hogan’s Almost an Angel, Look Who’s Talking Too and Teenage Mutant Ninja Turtles.

In 1991, he was chosen to star in Atom Egoyan’s The Adjuster. His performance as Noah Render, an insurance adjuster, was critically praised as “stoic” and “brilliant.” The film itself was nominated for a number of awards and won the Best Canadian Feature at the TorontoFestival of Festivals.

After the success of The Adjuster, Koteas appeared in the television movie The Habitation of Dragons (1992) and the short Contact (1992), which co-starred Brad Pitt and was nominated for an Academy Award. He also appeared in Cyborg 2 (1993) and reprised his role as Casey Jones in Teenage Mutant Ninja Turtles III (1993).

In 1994, he chose yet another bold and challenging role in Egoyan’s next film, the intense, dreamlike and intricate Exotica. Nominated for a Genie for the second time, Koteas played Eric, the moody and snarling DJ at Exotica, a “gentleman`s club.” The film was a huge success with critics and art-house audiences and was nominated for 12 Genie awards, of which it won eight.

Next he appeared in Camilla (1994) with Jessica Tandy, Bridget Fonda and Canadians Graham Greene and Maury Chaykin, and in the horror movie The Prophecy (1995), as a priest turned cop who battles with an archangel, played by Christopher Walken. He appeared in the HBO-TV movie Sugartime (1995) and starred in the feature Power of Attorney (1995), as an ambitous lawyer manipulated by his crime-boss client (Danny Aiello).

In 1996, Koteas appeared in David Cronenberg’s provocative Crash, in a role many critics believe he was born to play. The film was based on the book by J.G. Ballard, and tells the story of a group of people who link sex with car crashes. He played Vaughan, the Svengali-like leader of the fetishists. Crash received extremely mixed reviews and a great deal of controversy and went on to be awarded a Special Jury Prize for “originality, daring and audacity” at the 1996 Cannes Film Festival. Vaughan was described as “a mix of crudity and sophistication”, and although the ensemble cast included Holly Hunter, James Spader, Rosanna Arquette and Deborah Kara Unger, Koteas was hailed for his stand-out performance.

Roles in some major films followed the successful infamy of Crash. He starred in Steven Shainberg’s film noirish Hit Me (1996) as a miserable bellhop who is pushed too far, appeared briefly as Ethan Hawke’s father in Gattaca (1997), created a memorable chill as a vicious killer in Fallen (1998), stole his scenes as the handsome stranger who kisses Holly Hunter in Living Out Loud (1998), and appeared as an unfortunate tramp in Apt Pupil (1998).

In 1998, famed reclusive director Terrence Malick was casting for The Thin Red Line (1998) and invited Elias to audition for him. The character Elias was cast for, Captain James Stein, was originally intended to be Jewish, but Malick was so intrigued by Koteas’ Greek background that he changed the name from Stein to Staros. The epic film dealt with the soldiers fighting during the fierce Second World War battle of Gaudalcanal. Koteas was one of an extraordinary cast, including Sean Penn, Jim Caviezel, George Clooney, John Cusack, Woody Harrelson and his mentor, Nick Nolte. 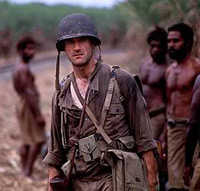 His standout performance in The Thin Red Line was one of his finest to date, as a captain who defies his commanding officer to save the lives of his soliders.

That same year, Koteas appeared in Divorce: A Contemporary Western (1998), which told the story of three divorces from the male point-of-view. In 2000, he co-starred in Michael Radford’s Dancing at the Blue Iguana, alongside Jennifer Tilly, Sandra Oh and Darryl Hannah, and appeared as a journalist helping Andie MacDowell find her husband in war-torn Yugoslavia in Harrison’s Flowers (2000). In Lost Souls (2000), he played a dapper priest battling Satan alongside John Hurt and Winona Ryder.

His next role, in HBO-TV`s A Shot in the Heart (2001), garnered a lot of attention. He played a death row inmate who is visited by his younger brother (Giovanni Ribisi) in the days before his execution. He also appeared as Steve Martin’s ne’er-do-well brother in the noirish comedy Novocaine (2001).

His next project was the big-budget action flick, Collateral Damage (2002), opposite Arnold Schwarzenegger, and in Sim0ne, with Al Pacino, Winona Ryder and Catherine Keener. But most significantly 2002 brought him back into Atom Egoyan’s moody, idiosyncratic world, in the film Ararat (2002). It tells a number of stories within a story, centred around the genocide by Turkey of two-thirds of its Armenian population. His portrayal of Ali, an actor playing a Turkish general, in the film being made about the Armenian genocide within Ararat, won him the 2003 Best Supporting Actor Genie Award.

Other credits include the USA Network’s mini-series Traffic (2003), which is based on Steven Soderbergh’s award-winning movie of the same title, as well as the acclaimed British mini-series Traffik.mHe played one of the main characters around which each episode is based.

Stone-jawed and puppy-eyed, Elias Koteas has the enviable ability to call on both his distinctive looks and talent to portray a variety of complex, often troubled characters.

This biography was written for Northernstars.ca and is Copyright © 2003 by Catherine Solmes. It may not be reproduced without written permission. Click here for more information about copyright.