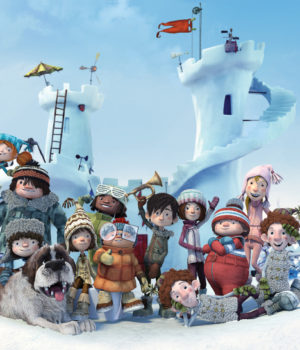 (March 22, 2016 – Montréal, Québec) – Earlier today at the Musée Grévin Montréal, Telefilm Canada honoured La Guerre des Tuques 3D (Snowtime!) with the 2015 Guichet d’or, presented to directors Jean-François Pouliot and François Brisson and screenwriters Normand Canac-Marquis and Paul Risacher for the French-language Canadian feature with the highest domestic box-office gross in 2015, $3.3 million. The award was presented by Carolle Brabant, Executive Director of Telefilm Canada, and the event, held in the museum’s exhibition hall devoted to the film, was attended by the producer of the 1984 live-action version of the film, Rock Demers, by the producer, Marie-Claude Beauchamp, the team from CarpeDiem Film et TV and Studio Singing Frog teams, by Vice-President Marketing and Promotion for Films Séville, Marie-Hélène Lamarche and key industry players.

The annual Guichet d’or rewards the Canadian director(s) and screenwriter(s) of the Canadian French-language feature film having generated the highest domestic box office in the previous year, earning at least $1 million. The award comes with a cash prize of $40,000 shared equally by the director(s) and screenwriter(s). Jean-François Pouliot, François Brisson, Normand Canac-Marquis and Paul Risacher each received $10,000.

“We are extremely pleased to pay tribute to La Guerre des Tuques 3D, a film that has drawn big crowds,” said Brabant. “What touches us most is that an animated film made right here, by local talent, has brought out families to movie theatres, offering them an experience to enjoy together.”

Michel Pradier, Director, Project Financing, at Telefilm added, “La Guerre des Tuques 3D was a huge gamble that paid off! How to please today’s children as well as their parents, who no doubt saw the original hit made in 1984! The oldest still remember that famous line – La guerre, la guerre, c’est pas une raison pour se faire mal! (War, war, it’s not a reason to hurt each other!). And there’s a good chance that our children will adopt it thanks to this animated remake of a great classic. Congratulations to everyone involved, and Bravo for rising to the challenge!”

Jean-François Pouliot, director, had this to say: “I hope this award will spark the interest of the Quebec and Canadian film industries, because it testifies both to our know-how and to the profit potential of animated films.”
François Brisson, also director, said, “It’s gratifying and touching to see all the work that we’ve done, drawing after drawing, rewarded by all those people, young and old, who saw and loved our film.”

“My thanks go first to André Melançon and to Roger Cantin and Danyèle Patenaude, who created the characters,” said screenwriter Normand Canac-Marquis. “Then to Rock Demers, whom I respectfully salute, and to Marie-Claude Beauchamp of CarpeDiem and Normand Thauvette of Studio Singing Frog. And lastly to Paul Risacher, without whom I’d be only half of a whole!”

Screenwriter Paul Risacher also had thanks for the team: “Our film’s great visibility played an important role in its success, which led to this award. That visibility is largely due to the ideas and efforts of Marie-Claude Beauchamp, producer, and Normand Thauvette of Studio Singing Frog. I thank them for making this possible.”

In closing, the film’s producer, Marie-Claude Beauchamp, congratulated the winners: “We are proud to see the screenwriters and directors honoured for their immense contributions to the film’s success.”

Awards that recognize box-office performance are usually given to distributors or producers, but Telefilm believes that it’s essential to honor the work of the directors and writers who bring Canadian stories to life. Media coverage of the Guichet d’or Award event has grown year after year, a sign that Canadians are eager to celebrate success and recognize homegrown talent.