The so-called “star system” that is synonymous with Hollywood all began because of the demand for Florence Lawrence, universally acknowledged as the world’s first movie star, although all but forgotten now.

Life began for Lawrence in Hamilton, Ontario, on January 2, 1886. Her career in show business started at the age of four when she traveled the vaudeville circuit billed as “Baby Flo – The Child Wonder Whistler.” She made her film debut at Vitagraph in 1907 in a move titled Daniel Boone. The following year, 1908, Florence went on to make 38 movies at Vitagraph. She moved to D.W.Griffith’s Biograph Studio the following year and it was here that Lawrence made some of her most memorable films, including Resurrection, which was directed by Griffith. She starred in a 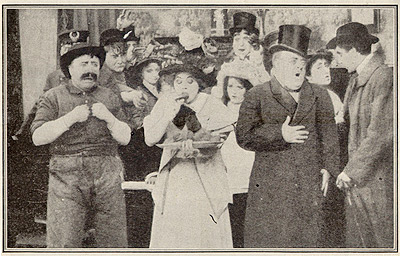 remarkable 65 films in 1909, the same year that saw another young Canadian, Mary Pickford, start her career in movies, also at Biograph. In all, Lawrence made over 250 films, many of them short “one-reelers” generally shot in less than three days.

What is even more remarkable than the number of movies she made for Biograph, is the fact that Lawrence worked anonymously. Today, in an era when the credit crawl of every feature is often several times longer than the most important scenes and lists such essential film making talent as caterer, and standby painter, it’s impossible to imagine that at the very dawn of the movie-making business credits were not important. And so, Lawrence became known to her legion of fans simply as “The Biograph Girl.”

Such was her popularity that when Carl Laemmle (who went on to found Universal Pictures) started his new IMP Company in 1910, he wanted Lawrence to be his leading actress, and that`s how the star system was born. First he offered her far more money than she had been making, and then he started a rumour that she had been killed in a streetcar accident in St.Louis. At just the right moment, he bought huge ads in all the leading newspapers saying that she was still alive and now working for the IMP Company. Seemingly overnight, everyone knew her name. To cap this publicity stunt, Carl Laemmle staged a public appearance in St.Louis and Lawrence drew more people than the President of the United States who had visited the city just one week earlier.

But the worlds’ first movie star did not enjoy her status for long. She was hurt in a on-set fire in 1914, which caused her to fall and the resulting back injury forced her to the sidelines for too long. One item of note was the making of Elusive Isabel in 1916. It was her first full-length silent feature but the reviews were not kind. After that Lawrence appeared in only a handful of films after a comeback attempt as documented in a rare interview published in the May 1921 edition of Photoplay Magazine. She was able to get some work in bit parts at MGM including a brief appearance in 1936’s One Rainy Afternoon. In a sad twist of fate Florence Lawrence was not given a screen credit for her last film role.

A few days after Christmas, 1938, Florence Lawrence mixed rat poison with cough syrup to end her life. For more than 50 years Lawrence’s grave 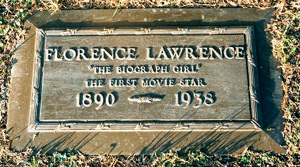 remained unmarked. But in 1991 a memorial marker was added, paid for by actor Roddy McDowall, who had a large collection of film memorabilia and served on the National Film Preservation Board.

Almost totally forgotten for her acting career, it is also a little known fact that Lawrence was an inventor. According to Kelly R. Brown’s 1999 biography, titled Florence Lawrence, the Biograph Girl, she was an automobile aficionado at a time when relatively few people actually owned cars, and in 1914 she invented the first turn signal, which she called an “auto signalling arm.” The arm attached to the back fender and when a driver pressed the correct button, it electrically raised or lowered, with a sign attached indicating the direction of the intended turn. Her brake signal worked on the same principle; another arm with a sign reading “stop” raised up whenever the driver pressed the brake pedal. This was the essential concept behind today`s brake lights. But Lawrence didn’t properly patent her inventions and soon other, more refined versions were invented and brought to market. By the time the first electrical turn signals became standard equipment on the 1939 Buick, her contributions were long forgotten.

This biography is Copyright © 2011 by Ralph Lucas and may not be reproduced without prior written consent. For more information about copyright, click here. All of the images, with the exception of the grave marker, were scanned from original sources in the Northernstars Collection.